Postcard of the Week: Dublin 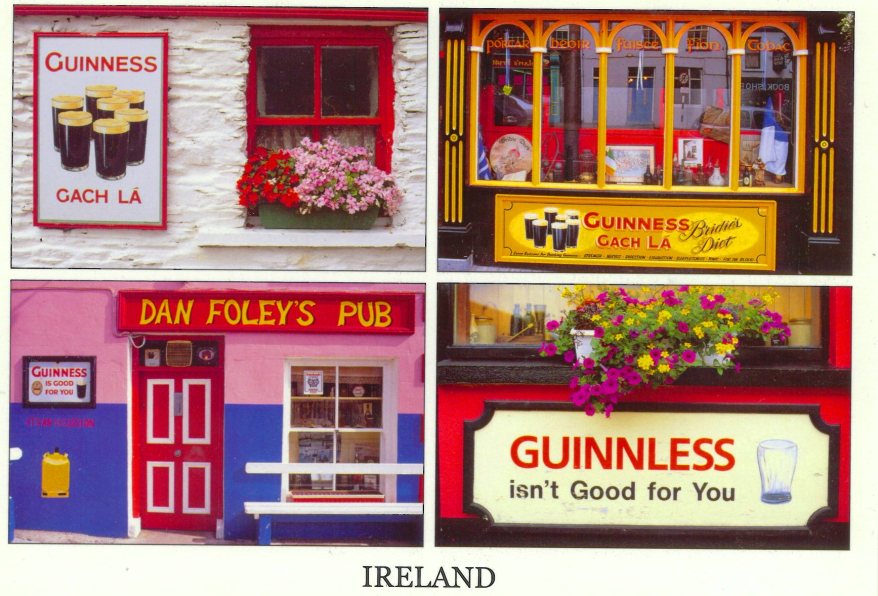 I’ve been in the merry city of Dublin all of last week. The purpose of my trip was for work from Monday to Friday, and we then stayed on for the weekend afterwards to enjoy the infamous St Patrick’s Day Celebrations in the Irish capital. The Irish are renowned for their drinking culture and although I myself am not partial to a pint of Guinness, everyone else had more than their fair share of the stuff. Beholding Irish people on Paddy’s weekend is truly a sight to behold, and apparently 48% of Irish men binge drink at least once a week – the highest in the world according to this article. The average Irishman drinks 131 litres of beer per year – and that excludes all other types of alcohol. That’s the average – including men and women of all ages! (We Brits can hardly talk – England comes third in the list with 99 litres of beer per year). I’ll write a full post about my trip to Dublin later this week, but I’m pleased to be able to say I’ve spent St Patrick’s Day in Ireland – I enjoyed myself immensely!

For those who do like Guinness, and like it so much that they want to see it being made, the Guinness Storehouse in Dublin takes you through the history of the drink with a pint included for €15.

He’s back!!! After almost 7 months away, he is now back for good and I am over the moon! ❤️
New (and final!) blog post! Today marks the 10-Year Anniversary of The Well-Travelled Postcard!
The Royal Victoria Ball at the Palace of Versailles 🇬🇧🇫🇷 was simply the most magical night of all, and so special to share it not only with so many friends, and also with my very own father! From the palace to the champagne, the reeling to the fireworks, it was a dream from start to finish ✨
We’re now 50% through the long-distance. It has felt like an eternity but I’m grateful to finally be closer to the end than the start! Yesterday marked 103 days apart and the mid-point before he’s back for good. It’s been 3 long winter months for me, 103 back-to-back working days for him… 🙈 At least he’s back shortly for a 2-week break 🤩 and after that the spring months should be easier to bear, filled with trips and distractions.
New blog post, and my first in a while! 📝✨Looking back on 2021: my goals and travels in year two of the pandemic
Day 1 of long-distance 😢❤️
New post! 📝 Growing up with The Well-Travelled Postcards: An interior design idea for travellers
New post! The 8th painting in my series of The Well-Travelled Paintings is from the village of Kioni on the north-east coast of the small island Ithaca, in the Ionian Islands in Greece. 🇬🇷🏝 I took this photo from a yacht during a blissful day sailing around Ithaca, having set off from the larger neighbouring island of Kefalonia, where I was lucky to spend a whole month this spring. ⛵️☀️🌊
New blog post! [Link in bio] 📝🔗 I recently became a charity trustee for the first time, for the charity Raleigh International, who some might remember I volunteered with in rural Nepal for 4 months in 2016. 🇳🇵🌏 I’ve been over the moon about the role, right through the whole application process and into the trustee board meetings themselves! ✨
New blog post! ⚡️ After a writing-hiatus over a fantastically full summer, this post is about setting 'New Year' resolutions in September: How to seize that post-summer energy to help yourself and help change the world 🌍