Postcard of the Week: Seville 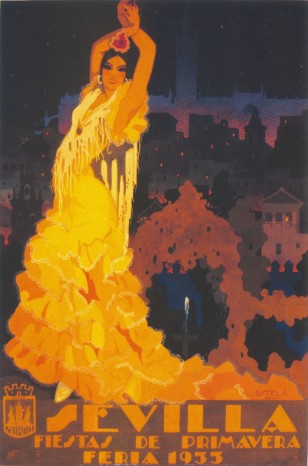 Before I arrived in Madrid earlier this year to work there for 6 months, I made a list of all the things I was looking forward to doing once I got back to Spain. For anyone who doesn’t know the full story, I had lived in Spain once before, spending 6 months of my Erasmus year studying at the Universidad de Córdoba in Andalucía. Andalucía is my favourite of all the 17 Spanish regions and it’s the most southerly, the hottest, the most troubled, the poorest, but in my view the most historical and the most innately Hispanic. Córdoba is the least well-known city of the three jewels of Andalucía, the other two of course being Granada (famous for its magical Alhambra and its tapas) and Seville (the capital of Andalucía, famous for it’s feria and its flamenco dancers).

I visited Seville a number of times during those six months, not least because that’s where the nearest airport is. Within a fortnight of arriving I headed to Seville with some of my new German friends, and the most memorable part of that trip was partying all night at an outdoor club near the river, and returning to the hostel around 7am just as they were serving breakfast!

I visited Seville again when each of parents came to stay, and we explored the Alcázar (royal palace), the Giralda (bell tower) and a certain tablao called La Carbonería in the old town Barrio de Santa Cruz, which is unlike the typical flamenco shows for tourists. To enter you need only buy a drink and take a seat at a picnic table. It’s informal and utterly authentic, I’d really recommend it. Fingers crossed it hasn’t changed too much since my last visit in 2011.

Seville is beautiful and a must-visit, but when speaking of Andalucía, my heart lies in Córdoba, a smaller and less touristy version of Seville, which can be explored entirely on foot.

What’s your experience of Andalucía? Which is your favourite city out of Seville, Granada and Córdoba?

On a separate note, I’ve applied to be part of a blogger trip to the much talked-of region of Kerala in India, which I’ve heard so much about and am desperate to see with my own eyes! If you could take a minute to vote for me here then I’d be eternally grateful. Thanks!

New post! Today is the start of National @CareersWeek and this year I obviously can’t attend schools in person, so I was instead asked by a school in Dorset to record a careers talk in advance, to be delivered online to their pupils, who are all studying at home during the pandemic.
New post! 📝 The second painting in my new series of The Well-Travelled Paintings is the view overlooking Cefalù from La Rocca, in Sicily. 🇮🇹 It includes a mini-travel-guide to the place and an insight into the different steps to build up the painting. 🎨 What you think of this one?
New blog post! 📝 Today I launch a new mini-series under the umbrella of my blog, called The Well-Travelled Painting, where I'll share my progress with re-learning to paint, and draw out the memories of the places and travel destinations I paint. 🌍🎨 Each painting will be accompanied by a mini-guide to the place depicted - a taster to whet your appetite for when we can travel once again!
New blog post! 📝 These are my 21 Wellbeing Tips for Surviving Pandemic Lockdowns, and you’ll find them on TheWell-TravelledPostcard.com (or see link in bio)
New blog post! 📝 This one covers 20 of my Goals and Projects for 2021, and you’ll find it on TheWell-TravelledPostcard.com (or see link in bio)
New post! Now the UK is back in lockdown and travel is off the cards for the moment, it’s a good time to escape reality by losing yourself in a good book 📖
New blog post! 📝 Looking back on 2020: my annual review is now up! Despite the challenges of 2020, I still believe it’s important to each individually reflect on the year past, and this year more than ever, to adopt an attitude of transforming negatives into positives, and always seeking the silver lining.
New blog post! My 4-week Travel Itinerary for the Western Balkans: the highlights of Albania, Montenegro, Bosnia, Serbia & Hungary 🇦🇱🇲🇪🇧🇦🇷🇸🇭🇺
New blog post! 📝 6 months into the pandemic - I’ve written a quick life update, including the importance of positivity and the 11 things that have helped me get through lockdown
A special bonus episode of The Well-Travelled Podcast is now live! 🎙Series 1 of my podcast finished in July after 10 episodes, but I will also record one-off bonus episodes from my travels as and when I'm away, reminiscent of the postcards that originally inspired this blog and its name. This bonus episode comes live from my trip to the Côte d’Argent in south-west France 🇫🇷 my first trip abroad since the pandemic began.