My Weekend Guide to Hamburg, Germany

Of all the countries in western European, I know Germany the least well. I’ve spent some time in Munich and Berlin but the rest of the country is more of a mystery. Despite that, I’ve plenty of German friends and British friends who’ve lived in Germany and rave about it! In particular I’d heard a lot recently about Hamburg in the north of the country, so last month I headed over there for a long weekend as part of the Come to Hamburg project for travel bloggers. We were hugely lucky with sunny 24°C weather the whole weekend, so I instantly adored Hamburg and am happy to recommend it for a weekend break – it was perfect. I also imagine it being a great city to live in as well, as it’s Germany’s second largest city with 1.7m people so has a great buzz. It’s even been ranked the 19th most liveable city in the world (compared to London which is far down the list at 41st!)

How long do you need?

We spent 3 full days in Hamburg, taking advantage of a UK public holiday. I soon discovered how much there was to see in Hamburg and I of course (being me) wanted to pack everything in, so we could have even spent longer in the city. If you’re organised with your time and selective about what to visit, then you could manage a 2-day weekend. Top tip: rent bikes so you can cycle around the city, saving time between places and taking it easy on your feet. We hired ours from Hamburg City Cycles (€14 for 24 hours, located near Landungsbrücken), who also offer guided bike tours, and they made exploring the city a piece of cake.

Hamburg’s airport has flights from all over Europe (including quite a few regional UK airports) and further afield too, and is easily accessible from the city by metro in just 30 minutes. If you’re coming from the Netherlands or Denmark there are also really easy train and bus links between major cities (for example, I actually arrived in Hamburg from the Netherlands, after a fleeting visit to Groningen).

The red-brick warehouse and canal district of Hamburg was been regenerated in recent decades and the area called HafenCity is now an architect’s paradise. The stand-out landmark you’ll naturally gravitate to first is the city’s newly finished concert hall, the Elbphilharmonie, which cost €789m to build and was a whopping 10 times over-budget. Its blue wave-shaped glass structure fits with the Port’s nautical theme and you can take an escalator to the 8th floor to walk around the perimeter of the building, overlooking the harbour and city. 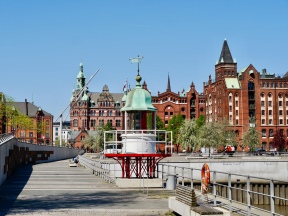 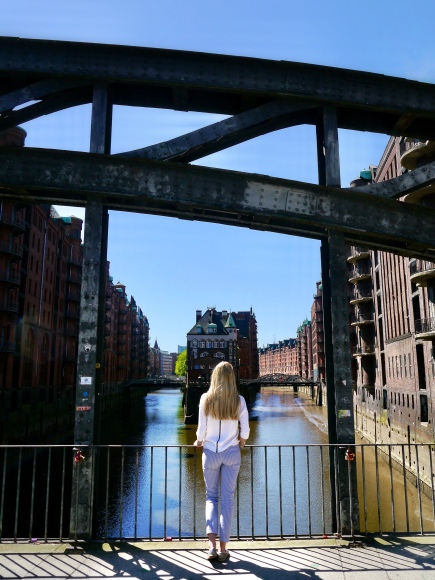 Also in the Speicherstadt area is Dialogue House, which confronts you with a world without one of your senses, either sight or sound. We visited had a 60-minute ‘Dialogue in Silence’ experience guided by a deaf person, and it was so thought-provoking that I wish we’d also had time to do the ‘Dialogue in Darkness’ experience too, to simulate being blind and better understand what it means to have either of those impairments. 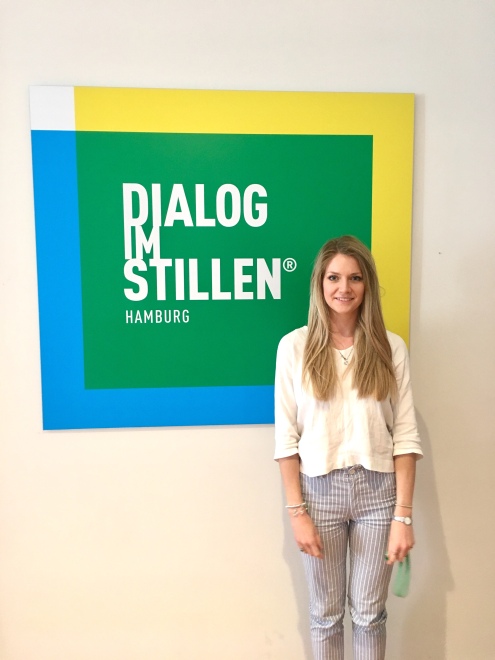 Nearby is also Miniatur Wunderland museum, which is the world’s largest model railway exhibition and collection of miniatures – not something I would naturally be attracted to but which was actually quite cute, seeing miniature and moving landscapes of the Italian riviera, Swiss Alps or snowy Scandinavia for example. 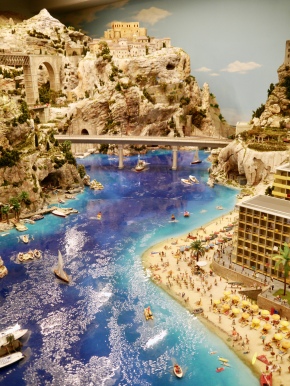 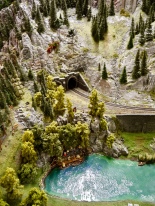 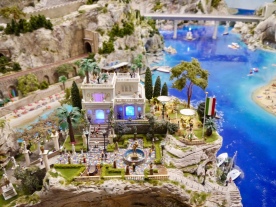 Heading west to Landungsbrucke, we took a 1-hour Harbour Boat Tour with Barkassen-Meyer (€18 per person) to explore the waterfront, the container port and cruise terminal, Hamburg’s beach and understand why the Elbe river is so essential to the character and livelihood of Hamburg. One tip I’d give is to wait for a specific English-language tour, instead of taking the English audioguide. 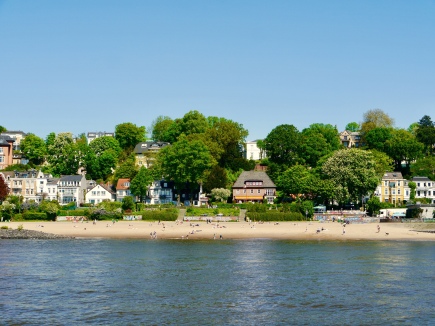 Finally, we cycled our bikes through the Alter Elbtunnel, opened in 1911, under the river to catch the view over Hamburg from the other side of the Elbe. There are also various historic ships and a submarine you can visit moored along the waterfront.

Following a walking route mentioned in our guide book, we visited the city hall, Rathaus, which is a stunning Neo-Renaissance palace built in 1897 to house the parliament and senate. Step inside to find the fountain in the inner courtyard. 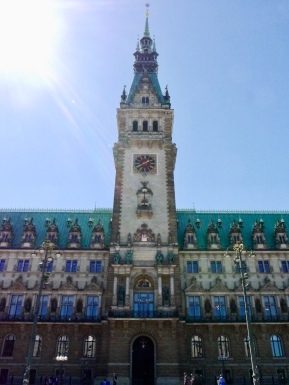 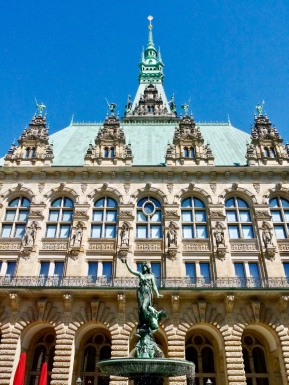 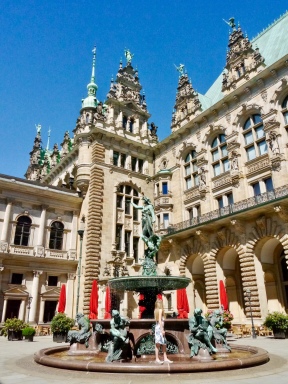 Nearby is the famous Alsterarkaden with its swans (see below for the incredible VLET an der Alster restaurant there too) and also Chilehaus, a 1920s Expressionist red-brick architectural marvel.

One of the city’s most postcard-perfect sights is Deichstraße, a row of Hanseatic merchants’ houses on a canal which shows Hamburg’s historical links to other port cities such as Copenhagen and Stockholm. For a sombre reminder of the city’s sad past, visit St Nikolai Memorial, which are the remains of a church that was destroyed by the Great Fire in 1842 and again 101 years later in 1943 during World War II raids. Having rebuilt it once already in the 19th century, the city decided to leave the remains as a memorial to the victims of war and violence. 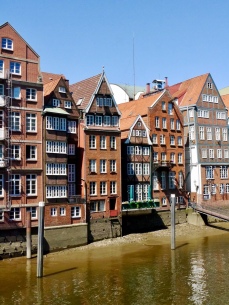 St Pauli district is Hamburg’s naughty, bohemian side and while it might not be the most beautiful, it’s an essential part of the city and a must-visit. Given that so much of its intrigue is hidden in gossipy stories of disrepute, we opted for a guided walking tour to hear all the misdemeanours straight from a local. We went on a free 2-hour tour with Robin and the Tour Guides which begins in the Fish Market, before exploring the rebellious and free-spirited past of the neighbourhood and the squatters’ battles against authority on Hafenstraße. 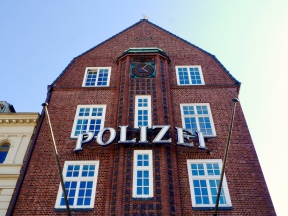 When we reached the Reeperbahn we learned about the Beatles’ months of living in Hamburg before they hit the limelight, and saw the seedy side of the famous Red Light District (the Reeperbahn) – the second largest in Europe after Amsterdam – and the Herbertstraße. Given Hamburg’s maritime history and status as the third busiest port in Europe, it’s not surprising that this area boomed to welcome sailors’ back after long voyages at sea. It’s not an area I’d want to visit alone with a guidebook, so having a guide was absolutely fantastic. Finally, also nearby is St Michael’s church, whose 132m-tall tower you can climb for great views over the whole city.

North of the Old Town are the Inner and Outer Alster Lakes and the are around the lake is the fanciest part of Hamburg – where leafy boulevards are home to mansions and the well-to-do of Hamburg eat, shop and socialise. There’s a great cycle or jogging route along the eastern side of Outer Alster lake and a large fountain over the lake that’s illuminated at night. We also really liked the Planten un Bloemen Park (an original title for a park, literally meaning ‘Plants and Flowers’), with carefully sculpted gardens and water fountains, which even have a synchronised light display at night in summer months. It was a heavenly spot for an ice-cream and a nap in the sun. 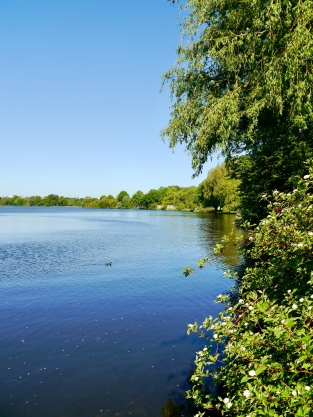 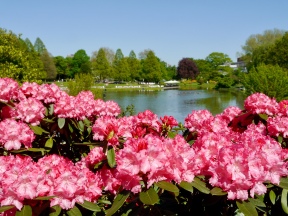 A nice, calm and leafy part of the city to the west is Altona, which is pleasant to explore by bike. En route from Landungsbrucke to the Altonaer Balkon terrace, you’ll pass a number of interesting sights, including the Fish Market and the cruise terminal, near which is the incredible ship-like parallelogram building, Dockland. Once at the Balkon we found people picnicking and relaxing in the sun, and we headed north to admire the Rathaus Altona (another city hall, as Altona was technically an independent state back when it was built) and the green park of the Platz der Republik. Altona is a lovely chilled area to explore if you have a little extra time to spare and a sunny afternoon. 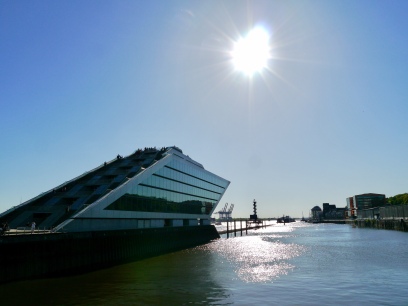 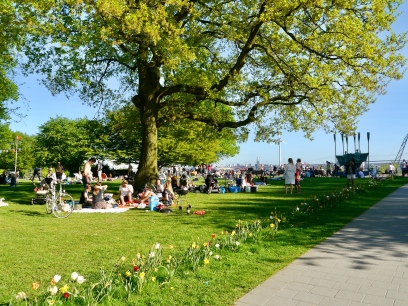 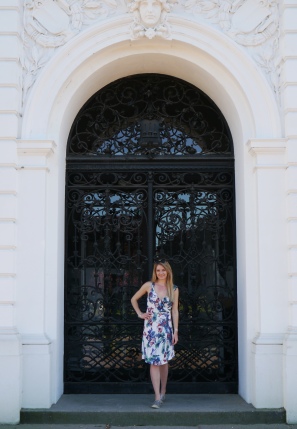 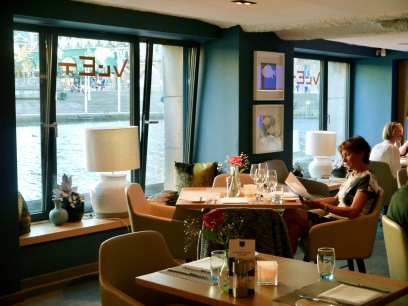 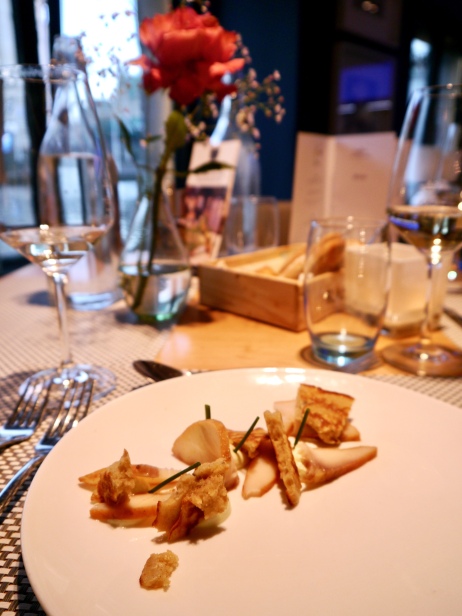 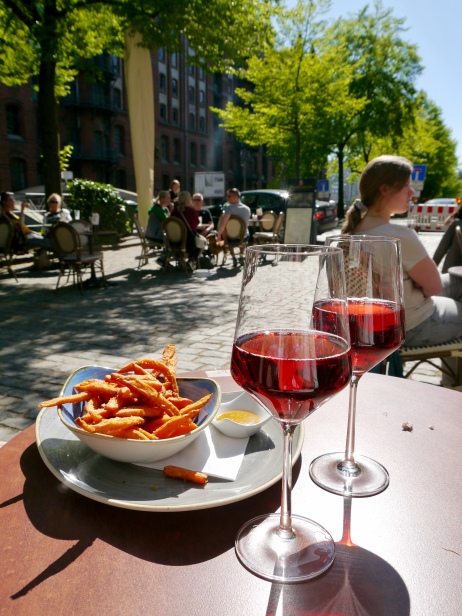 We stayed in the Heikotel am Stadtpark (read my full review here) in the Winterhude district in the north-east of the city and just south of the city’s main park, Stadtpark. Staying in this area, away from the main tourist draws, felt like a more authentic and local experience. It’s also convenient for getting to/from the airport, and roughly a 20-minute cycle from the city centre. It was perfect for us, but I also spotted some great looking hotels in HafenCity and the city centre itself.

What to do if it rains?

We had incredible weather so preferred to be outside exploring, rather than inside museums and galleries. But if you arrive with bad weather, then there is still plenty to see. We had a Hamburg Card (from €10.50 per day), which includes unlimited public transport and discounts on museums, galleries and attractions, many of which will keep you dry and warm. You can take the Harbour Boat Tour with Barkassen-Meyer (sitting inside). In HafenCity you can visit the Miniatur Wunderland, the Maritime Museum, and thought-provoking exhibitions on blindness and deafness at the Dialogue House. In the city centre and near the Alster Lake you can visit the 5 different art galleries that comprise the KunstMeile (meaning ‘Art Mile’), with a single ticket costing €25 valid for 3 days (discount available with the Hamburg Card). There is apparently also a Chocolate Museum! 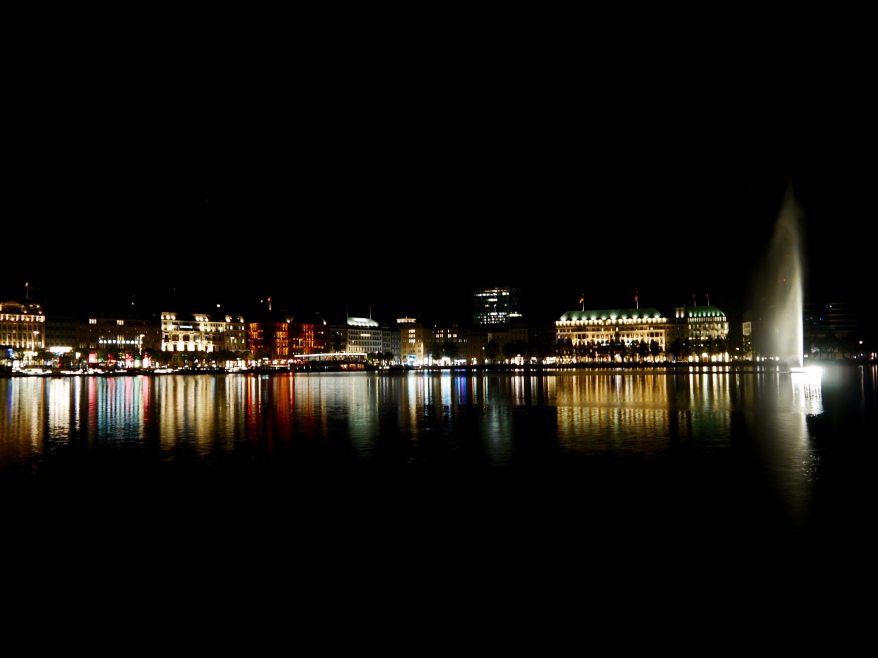 Overall I left Hamburg absolutely beaming! The city had all the ingredients I need for a perfect weekend city break, and was a wonderful surprise!

Have you been to Hamburg before? What did you enjoy most about the city? And are there any other German cities you’d recommend I visit?