It’s been almost 60 years since the birth of the character James Bond in Ian Fleming’s first novel Casino Royale. Since then he’s travelled to absolutely everywhere you can imagine – normally in impeccable style too.

The night before last I had the good fortune to attend a Q&A with James Bond himself (well, pretty close). Although I sometimes forget it, Bond is just a fictional figment of our imagination, and the closest that one can get to Bond himself is to meet the two men who write Bond for the big screen.

Neal Purvis and Robert Wade were interviewed last night by Dave Calhoun, Film Editor at Time Out London, in the Regent Street Cinema, part of the University of Westminster. Purvis and Wade are the scriptwriting duo that have plotted, masterminded and scripted the last five Bond films: The World Is Not Enough (1999), Die Another Day (2002), Casino Royale (2006), Quantum of Solace (2008) and Skyfall (2012). And they are absolute geniuses! Not just for their snappy one lines, action-packed plots and devilish villains, they also happen to be a comedy pair that had us laughing from start to finish last night. Dave Calhoun’s interview spanned their careers from the early 1980s up to the present day, interspersed with short clips from a few of their major films. It was a fascinating window into the minds of two creative masters and of course they dwelled suitably on their five Bond blockbusters.

“I have a travel guide called The World’s Most Dangerous Places which I browse for ideas for action scenes,” said Robert Wade.

Ever since the first Bond film, Dr. No in 1962, far-flung exotic destinations have been just as much of a trademark of the series as Bond’s martini, shaken not stirred. 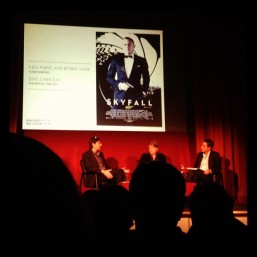 So how exactly does Bond choose where to travel? Whether he’s flown to Shanghai (as in Skyfall) to track an assassin or being tortured in North Korea (in Die Another Day), Bond gets around, and Purvis and Wade are the ones who plan his travel itinerary.

“I have a travel guide called The World’s Most Dangerous Places which I browse for ideas for action scenes,” said Robert Wade. In other cases, they’ll visit somewhere in the world and simply feel that it has to make an appearance in a Bond film, and they’ll then find a way of weaving that location into the plot. They both agreed that to write a scene, they need to be able to visualise the surroundings and the location, and so for that reason they base the plot around destinations they are familiar with. What a fantastic job – Film Set Finder! Sign me up! Purvis explained that they went to the Palio in Siena and knew that it had to be part of a Bond film before it appeared in any other film. They wanted people’s first discovery of the Palio to be connected to James Bond and spookily enough, in my blog post on the Palio in Siena over 2 months ago, I did reference the opening scene of Quantum of Solace.

I of course have a special interest in the travel aspect of Bond’s escapades around the world and in the last five films under Purvis and Wade’s excellent guidance, he’s been to no fewer than 18 countries: Spain, Russia, Turkey, North Korea, Cuba, Iceland, the Czech Republic, Uganda, Madagascar, the Bahamas, the USA, Montenegro, Italy, Haiti, Austria, Bolivia, China and Macau. Those films will undoubtedly have had a tremendous impact on tourism in some of those areas. Visit Tuscany, the tourist board for Tuscany, agreed that Siena had seen in increase in visitors and also pointed out that Volterra, the setting for parts of the Twilight saga (also in Tuscany), went from being a tiny unvisited village to being a Mecca for Twilight fans. Think about it – how often has it occurred when you’ve been seduced by some beautifully filmed location in a film, and then decided that you simply had to visit it?

There are two morals to this story: