Monkeys, the Jungle and Balinese Culture in Ubud 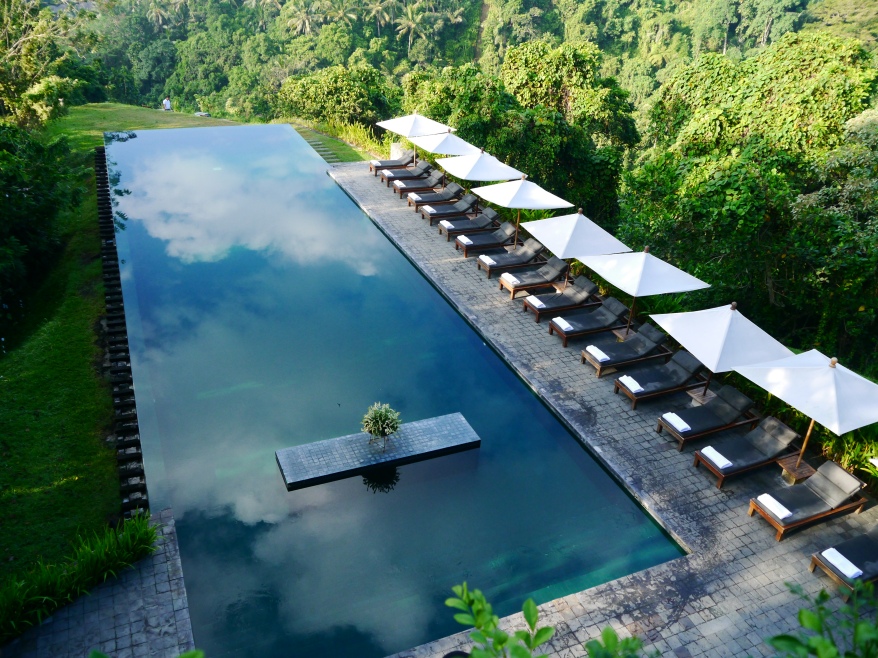 Our trip to Asia in May was split into three parts. Firstly, sightseeing in the hectic metropolis of Hong Kong. Secondly, relaxing by idyllic beaches on the south-east coast of Bali, in Nusa Dua. And thirdly, culture and wild countryside in the centre of Bali, in Ubud.

For our last three days in Bali we stayed at the 4* Alila hotel just outside of Ubud. It’s a member of Design Hotels, which is a curated collection of over 260 stunning luxury boutique hotels around the world.

Our taxi journey to Ubud was eventful as it was the day of the Galungan Festival, a bi-annual Hindu celebration. We stumbled upon processions, saw the local religious costume that the citizens of Ubud wear and admired the small villages and hamlets we passed in the taxi. Our taxi driver took us higher and higher up into the mountains, into narrower and narrower roads, winding among rice paddies and ever deeper into the jungle. Set a good 5 minutes drive from the road, we arrived at Alila Ubud, which is bang in the middle of the jungle, perched atop a steep slope that gives out onto spectacular views of the surrounding valley, with nothing but nature all around.

The reception, restaurant and poolside bar are sheltered by roofs but otherwise are open air, and there’s an incredible natural feel to the hotel. Don’t get me wrong, the hotel all looks very new and very stylishly designed, but it doesn’t look out of place among the palm trees and exotic flora that surround it. Very excited to be somewhere quite so green, we were shown to our room which had its own garden and terrace overlooking the other side of the verdant valley, as well as an outdoor bathroom in a back garden. I see these open-air bathrooms in Condé Nast Traveller all the time, but this was actually my first experience of one. The room was otherwise very nicely decorated and there was even some gamelan music playing gently on the iPod deck to welcome us as we entered.

With the sun hastily setting, we headed into Ubud town to get some dinner. Luckily for me, my friends are a very well-travelled bunch and whenever I travel somewhere, one of them usually pipes up with some insider tips! So on a friend’s recommendation, we ate at Dirty Duck, a famous spot based around a series of pools, with individual little huts over every table, which is surrounded by huge cushions for lazing around on in a very bohemian-style, while at the same time resembling a Roman Emperor.

Dirty Duck was tasty and had a very relaxed vibe but the waitress has to be the grumpiest and surliest person I’ve ever met! So I’m torn as to whether or not to recommend it… But what did strike us that first evening was just how quiet Ubud felt. Everything seemed closed, the streets seemed empty and we couldn’t fathom what had happened. Were we simply in the wrong part? We later realised that restaurants & bars might have been closed due to the Hindu celebrations.

Next morning we strolled down to the pool for a spot of tai chi on the grass overlooking the jungle below. I think it was my first attempt at tai chi and it’s based on the slow transfer of weight to and fro, while holding an invisible medicine ball between your palms. I found tai chi very relaxing but couldn’t put my finger on the exact benefits. Yoga improves flexibility and tai chi improves….what? A mere 30 minutes was plenty and feeling very smug with ourselves for achieving something on an empty stomach, we went overboard on the breakfast, which is something well worth going overboard on! Each day there’s a new à la carte gourmet tasting menu, so we ordered 8 or 9 different plates between us, as well as all the smoothies and hot drinks we could manage. I rather like this concept of a breakfast tasting menu and did revel in the fact that no buffet was there to tempt me to overfill my plate (an error I consistently make in hotel breakfast buffets, and an error I imagine I will continue to commit for the rest of my life! My eyes are simply too big for my stomach…)

The hotel offers a free shuttle bus into Ubud town at certain times of the day and before long we found ourselves outside the Puri Lukisan Art Museum in Ubud. This museum exhibits and celebrates traditional Balinese Batuan-style paintings as well as their evolution as a result of the Western painters Walter Spies and Rudolf Bonnet who arrived in the 1930s. I tried to put myself in the shoes of those early artists who came to Ubud, to imagine what they would have found in front of their eyes. With the abundance of tourism in the town it’s hard to imagine how it might have looked. There is some very expensive artwork on sale in the fourth building of the museum, but you will find cheaper pieces elsewhere in the town (I bought a small painting in Ubud Market for a fraction of the cost). 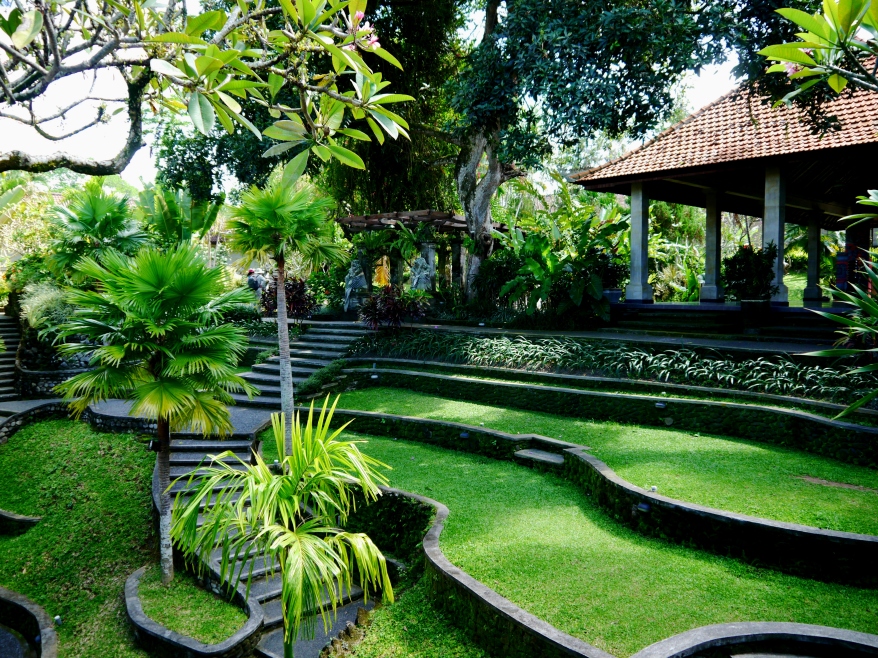 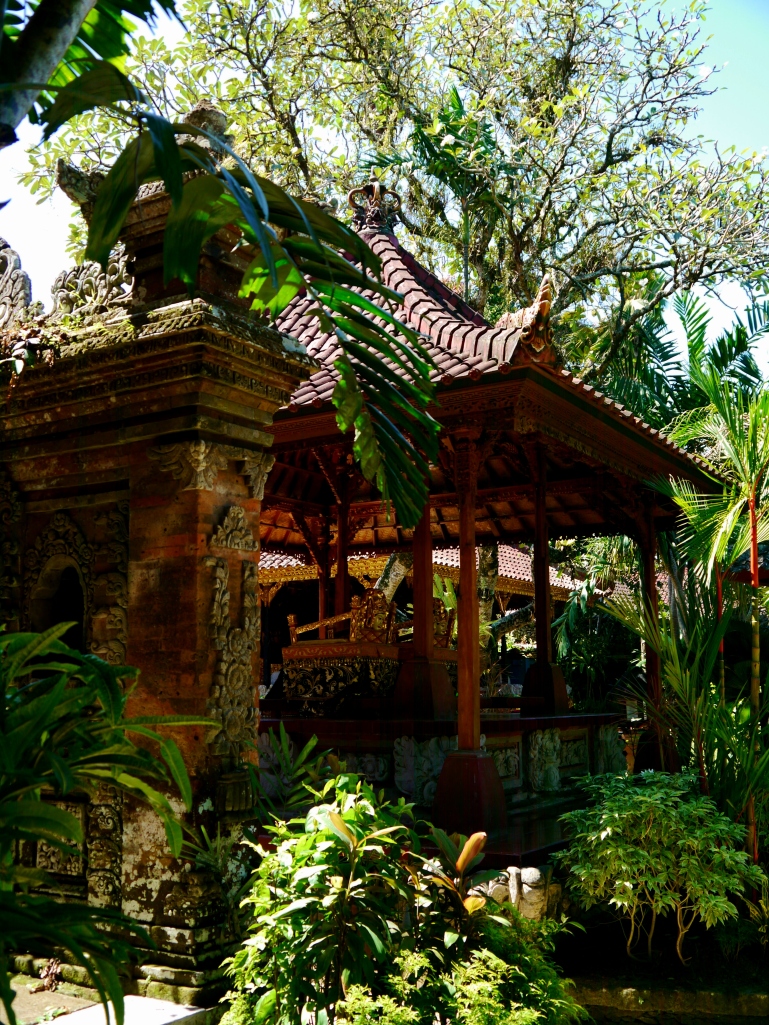 You’ll find Ubud Market on the main road opposite Ubud Palace, which is closed to the public, except for one courtyard. In the market the stall owners will heckle you to buy their goods, but if you can bear it then it’s quite a handy place to pick up souvenirs and presents. On my last trip to Asia as a backpacker I was careful about how much I bought, as I had to carry all my souvenirs on my own back for 4 months, so on this trip I went a little over the top to make up for it! I bought a Batuan-style painting, a traditional wooden mask in blue tones, some hand-painted wooden bowls, some necklace pendants and rings. In Nusa Dua I also picked up some mother-of-pearl and coconut bowls and plates.

The main road in Ubud is nothing special so head down one of the parallel roads leading south downhill to escape the brashness of tour groups and the eyesore Starbucks that has absolutely no place in Ubud! One of the main tourist attractions in Ubud is the Monkey Sanctuary down on Monkey Forest Road. We had seen plenty of monkeys up close in the Samabe resort and in the Alila Ubud hotel, but still wanted to see what all the fuss was about. You can buy bananas outside the Monkey Sanctuary and they will pounce on you to get at them! But very useful if you’re after a picture with a new simian friend. The sanctuary is set around an old temple complex and exploring the grounds itself, complete with old stone bridges and statues, ancient tangled-root Banyan trees and rocky overgrown streams, is just as interesting as the monkeys themselves. However, here is the aforementioned obligatory monkey photo! I don’t have photos of some morally-questionable monkey behaviour, but there was some of that on display too. 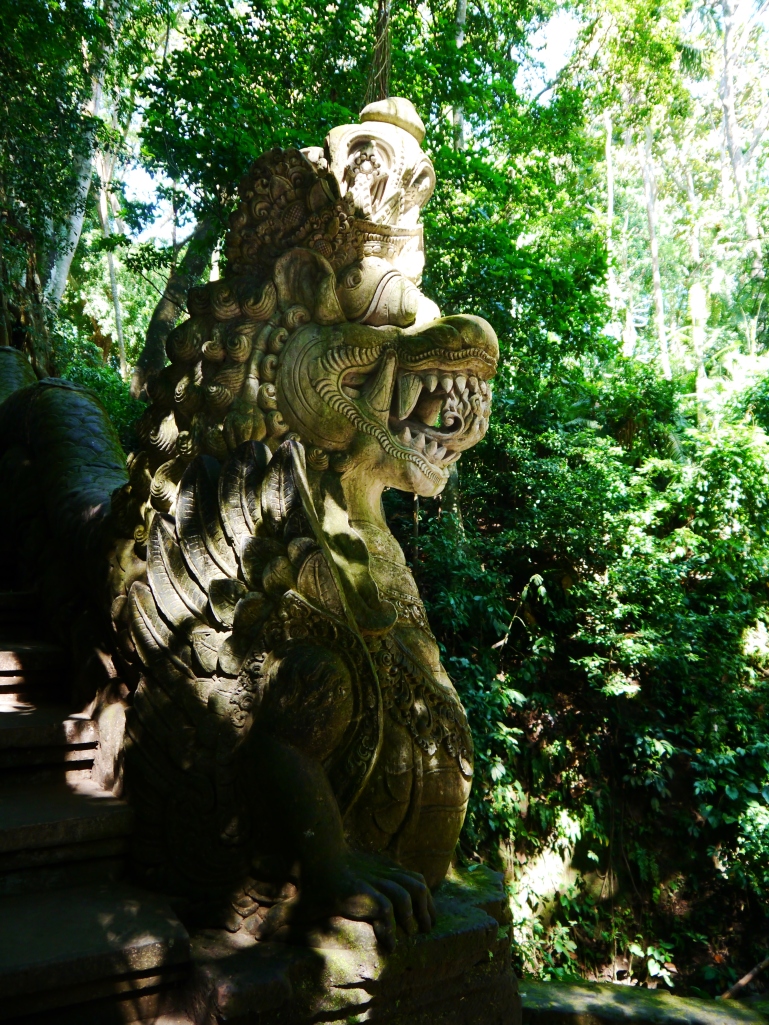 Back at Alila Ubud after a hot day in the town centre (which I’m not too fond off to be honest) we cooled off with a dip in their infinity pool and a lie-down in the sun. That evening by chance we stayed in our hotel for dinner, and we later found out that a British woman in Ubud was murdered that night, so we’re thankful we hadn’t been out and about…

The next morning we rose early to be picked up for a cycling daytrip with Bali Eco Cycling. This was another recommendation from a friend and it’s a daytrip through the countryside around Ubud, starting off with a view into the crater of Mount Batur, stopping off at rice paddies, traditional family homes, coffee plantations and ancient Banyan trees throughout the day. I absolutely loved it and learnt so much about Balinese culture, so I think it merits its own blog post and you’ll have to look out for that one later…

Back at the Alila Ubud hotel after a great day of exploring and cycling, we indulged in a bottle of red wine in our garden while watching the sunset and looking back over the last two weeks of holiday in Asia: the relaxation and escapism, the amazing locations, scenery and hospitality of everyone we met, the fantastic Asian food (which is seriously missing in Spain I can tell you!) and that heavenly feeling of being somewhere new, different and foreign. I thrive on that feeling and it’s what makes me feel truly alive.

And so the time came to end our adventures in Asia and return to our lives in Europe. Two weeks in Asia is nowhere near enough, and only left us wanting more, but c’est la vie and our time was up. We began the long journey home in style once again with Cathay Pacific, which greatly helped to remedy the post-holiday blues (and I’ll tell you why in my next blog post). But for now it’s farewell to Hong Kong and Indonesia, and you can be sure that we’ll be back!