Postcard of the Week: Countryside Market Towns in the South of France 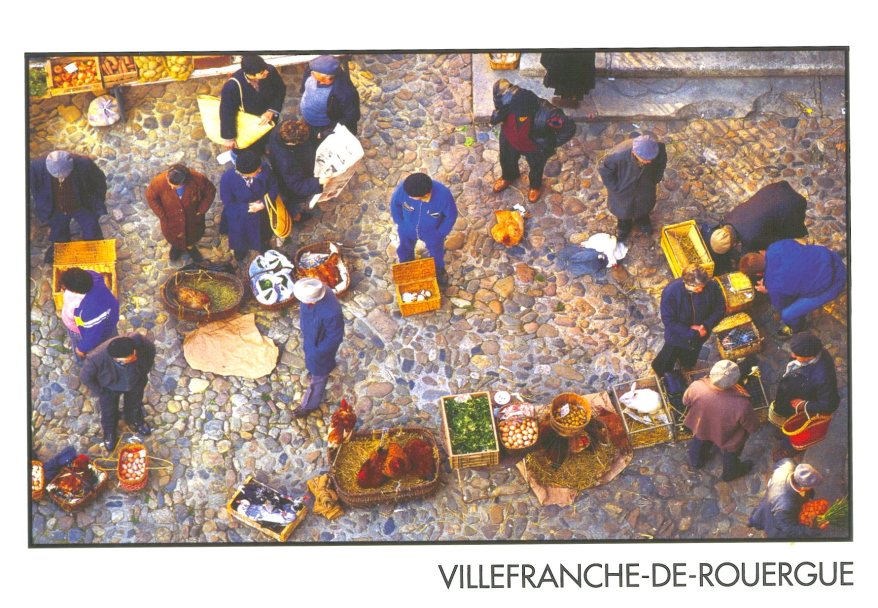 Villefranche-de-Rouergue is not a town I had ever heard of before. I imagine most of you won’t recognise the name either. It’s hidden deep in the French countryside in the south-westerly region of Midi-Pyrénées. This particular postcard is of Villefranche-de-Rouergue on a market day (Thursday, if you ever happen to be in the area!) with local farmers and producers selling their wares. It’s a sleepy town with a traditional square lined with stone arcade arches along three sides, with the town’s church occupying the fourth side. It’s quaint and olde-worlde, with cobbled streets, flower-adorned bridges across the Aveyron River that cuts through the small town. They even have a ‘tourist train’ to show visitors the sights and sounds, which is potentially a little ambitious for a small French town with only 12,000 inhabitants, and which few foreigners are aware of. But it is certainly a sweet market town and it took me back in time.

The sad thing about Villefranche-de-Rouergue, and undoubtedly countless other small provincial French towns, is that they seem to be in decline. The young have all fled to the big cities in search of employment, leaving behind ageing populations and resilient farmers who stick by their prized (and picturesque) land. It’s charming to see the weekly market still in action after centuries and centuries, but the worry of gigantic supermarket chains poaching business is as prevalent in France as it is in Great Britain. So the million dollar question is how do you persuade the younger generations to stay? How do you revitalise a town and make it thrive once more? If it’s not a tourist hub such as Najac (a nearby town we visited which is saved by it’s stunning 13th century castle and impressive views) which can draw investment and visitors from outside, then how do you ensure the long-term prosperity of a rural market town?

Let’s hope they find the answer and are able to save this rural French town before it’s too late.