As some of my readers might have noticed, I’m rather partial to a walking tour. I’ve been on walking tours all over the world and have recently branched out into taking food tours, firstly in Brooklyn last year and in Madrid just a few months ago. I’ve just moved back to London and, as unlikely as it might seem, I recently went on a food tour of East London. It’s a 3-hour tour run by the specialists at Eating London, who have selected 8 essential places to taste the full range of English cuisine.

Now, England isn’t exactly known for its food. Typical English food is made up of meat and potatoes, with Shepherds Pie or a Roast Lunch as perfect examples, and is a plain, unexciting affair. We Brits like eating it as it’s what we were brought up on, so our palettes crave the familiar taste of home, more than ever when living abroad, where no one would ever dream of opening an English restaurant. But after this tour I think we need to give English cooking a break from all the criticism, there are some gems!

I had the extra excitement of taking this Food Tour during my weekend of experimenting with the Google Glass lent to me by HolidaysPlease. Take a look at my blog post from last week on ‘My Weekend Looking at London Through a Google Glass‘ to find out what they’re actually like and to see photos of me looking like a Star Trek character with them on! The Google Glass made it so incredibly simple to take photos and videos of the food on this tour, and luckily the other people on the tour didn’t mind me wearing them and taking photos. One worry I’d had before trialling the Google Glass was the reaction of the public regarding their privacy and the fact that they can’t tell if I’m recording them. But this group were all very chilled.

We met our brilliant guide Ollie at 10am in Spitalfields Market, and along with eight or so others, we set off on the tour.

So, having started at 10am, our first stop on the tour was breakfast. The British like to go all out at breakfast and so we rightly began the day with a bacon buttie, the breakfast to conquer all hangovers. Or that’s how I have traditionally considered them. The bacon sandwiches at this particular award-winning bakery-restaurant were instead rather gourmet, with a homemade-secret-recipe tomato sauce accompanying the freshly-baked-in-house bread, and they certainly shouldn’t be wasted on a hungover stomach. They deserved to be savoured. 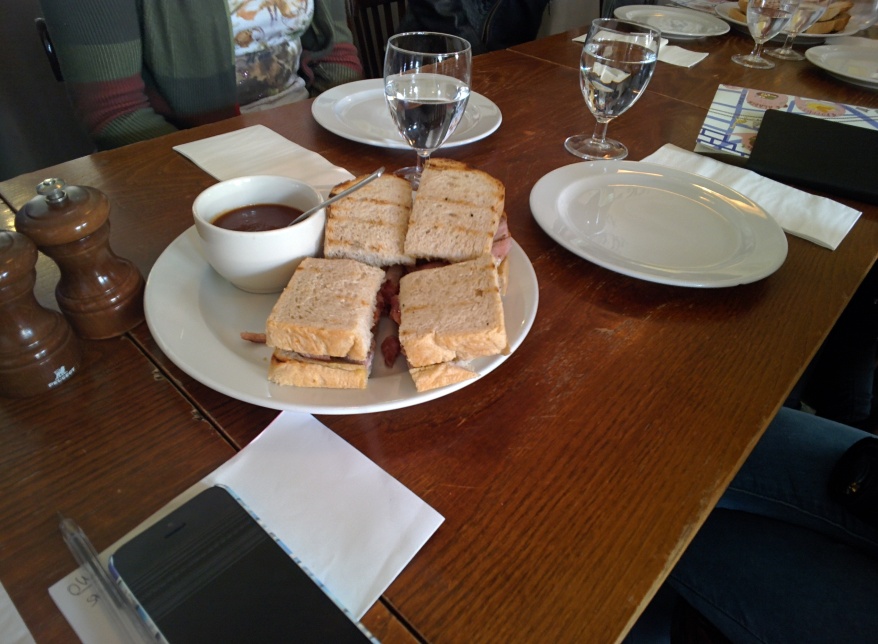 2. The Dustman’s Wedding Cake at the English Retaurant

Or so this classic pudding used to be called, it appears! A Dustman’s Wedding Cake is actually Bread and Butter Pudding, a pudding all English schoolchildren are introduced to in school canteens across the country, which is possibly why is gets such a bad rap. Often soggy, rarely exquisite, my previous experiences of this pudding were soon forgotten upon entering venue no.2, the oldest building in the area: a traditional pub called the English Restaurant. Readers of my blog sometimes wonder if I actually work, as I always seem to be travelling. I do work, for the record, and indeed from age 16-18 I worked part-time in a gastropub in West Sussex, quite similar to this one in East London, although not in terms of the quality of the Bread & Butter Puddings! In this one they are served in individual ramekins, with a flame-torched melted brown sugar topping. The custard sauce spiked with rum and the hint of the orange in the pudding itself are just a winning combination. 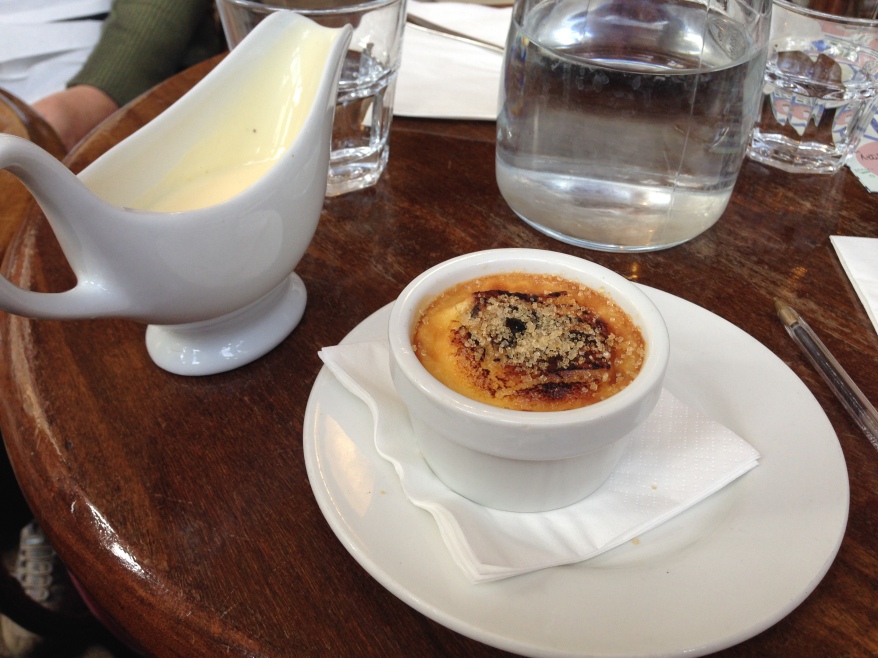 After guiding us through Europe’s oldest red light district, near the spot where Jack the Ripper claimed his 5th victim, past a Jewish soup kitchen and via Artillery Passage and Gun Street (all accompanied by interesting facts told in his humorous style), Olly had worked up our appetite in preparation for a cute fromagerie in Spitalfields, called Androuet, where we sampled various Cheddars, Stiltons and Stinking Bishops. English cheese was one thing I really couldn’t get hold of in Madrid so I’d been craving it for a whole 6 months prior to this tour! 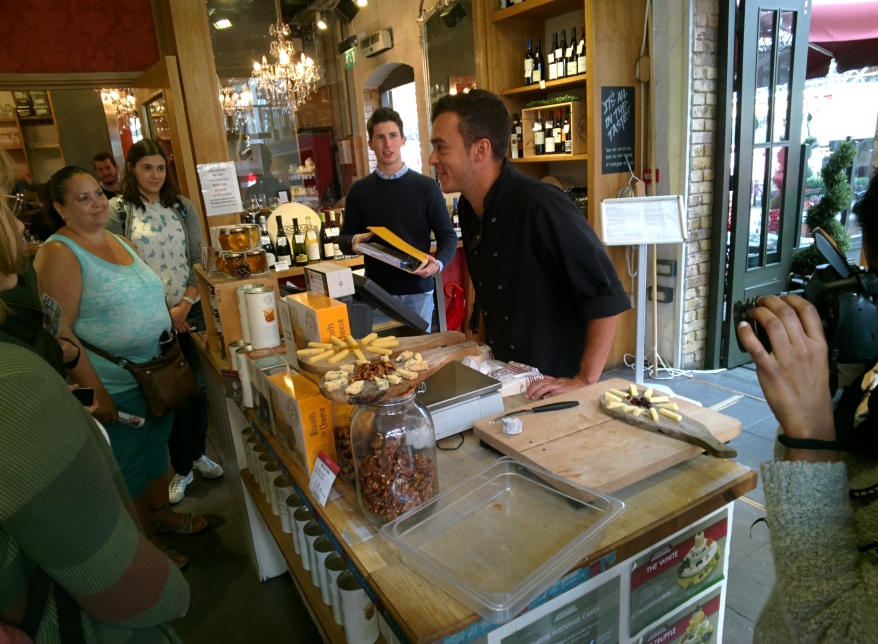 4. The Best Fish and Chips in the UK (true story) at Poppies

If you’ve had Fish & Chips in Shoreditch then you’re likely to already know this infamous chippy… It’s called Poppies. It’s a Fish & Chips shop that’s been serving Britain’s national dish since 1945. The interior design is 1950s and they even serve jellied eels, something my mother proudly claims to have eaten quite a lot. Controversially for everyone in my family, I’m a non-fish eater but i did eat some of this battered cod, getting over my psychological dislike of fish in the name of journalism. It was actually pretty good… 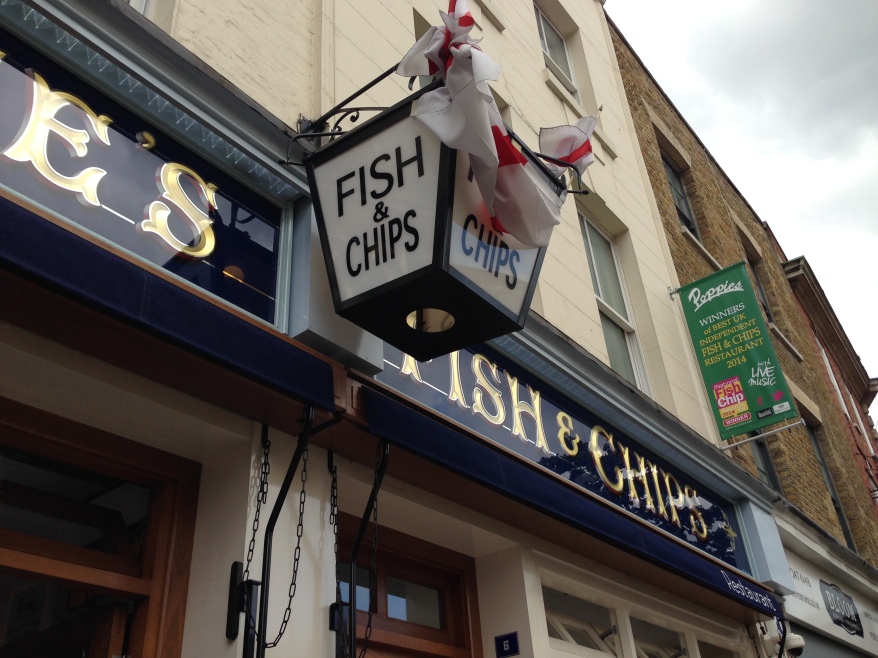 5. Orchard’s cider (yay) and real ale (nay) at the Pride of Spitafields Pub

The Americans in our group were in for a treat at our next pit-stop, a very English pub, complete with football on the TV, hooligans and drunkards at midday! The pub even comes complete with a long-suffering landlady and pet – an adorable cat who looked like he just he wanted to nap in peace… Here we tasted a real ale, which only one of the entire group actually liked, and an Orchard’s cider, which was in contrast like nectar! 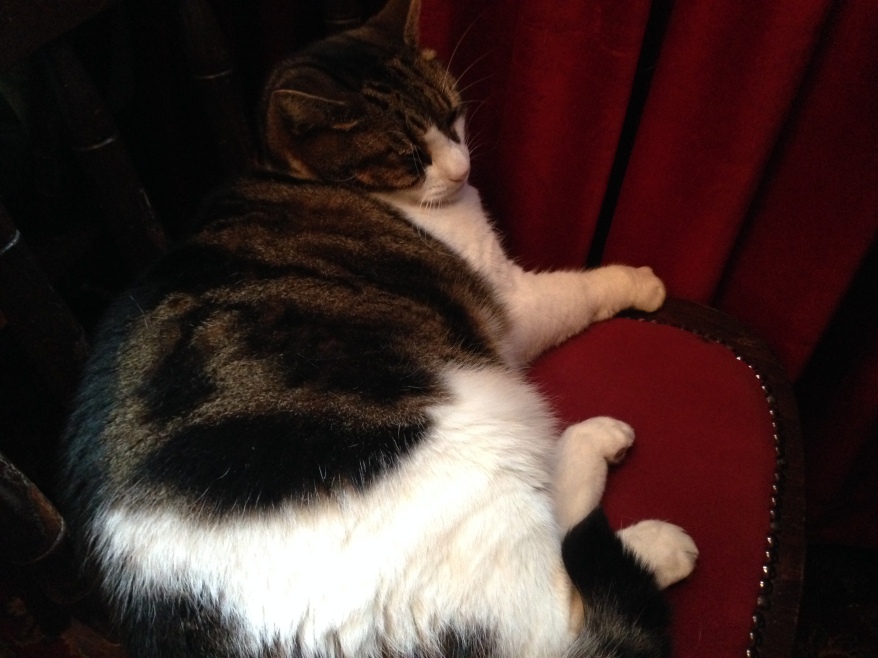 By now we were well and truly in East London’s well-touristed street art area near Brick Lane. Last summer I wrote a blog post about the street art we discovered on an excellent walking tour, can you read that here. Considering this wasn’t a street art tour, Olly pointed out a remarkable amount of the most famous works and gave the context for the borough’s rise in artists and hipsters over the last few decades. We arrived in Brick Lane for a curry, England’s new ‘national dish’. Non-Brits might be asking why on earth an Indian speciality is one of our national dishes? England is home to a huge number of Indians, due to our colonial relationship with India through the old British Empire, so lots of Indians chose to come and live here in the UK, and have simply never returned. They’re a very friendly bunch, and in my opinion are much better at integrating into English society than lots of the other foreign communities in Britain. There are an astounding 55 curry outlets on Brick Lane, and 15,000 in the whole of the UK. Olly lead us into Aladin, which claims Prince Charles as a patron, and which served us Vegetable Bhuna, Lamb Pathia and Chicken Madras with rice and naan bread. 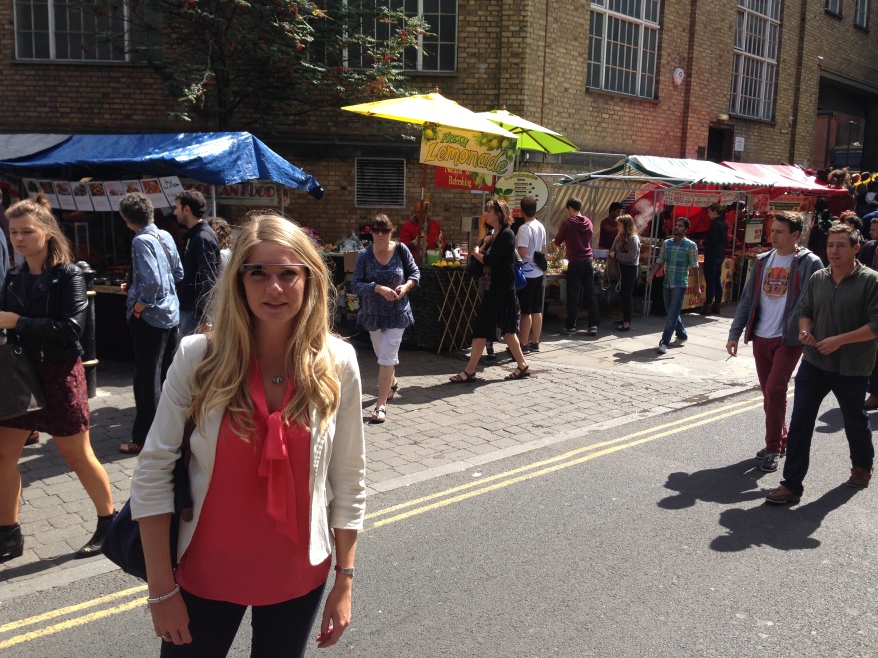 By now we’d all given up walking and were rather rolling in between pit-stops, such was the quantity of food we’d consumed. The seventh delicacy on the cards is something I wouldn’t exactly class as English (perhaps the tour guide had run out of ideas?) as is something I would associate more with my food tour around Brooklyn last year than with London: Salt Beef Bagels with Pickles and Hot English Mustard. Yes it was tasty, and the Bagel shop would certainly concur, as they manage to sell 6,000 of them a day! You’ll recognise this bagel shop by the queue pouring out of the front door 24 hours a day.

The tour of course needed to end on a sweet note. And no matter how full I am, I always have space for something sweet. Right? Our final stop is near Shoreditch High Street Overground Station and is a rather cool restaurant I’ve been to once before. The final order of the day was for salted caramel chocolate tart with chocolate ganache. Wowzas. Or as Ollie put it: “Everything your body craves – sugar, salt and fat all in one hit!” This was finished off by tea all round, in true English style.

So how did the Google Glass enhance the tour for me? Apart from taking photos and videos unbelievably simply, and allowing me to dictate notes straight to Evernote when I wanted to remember the name of a certain food or place, the Google Glass didn’t add that much. Without Ollie, it would have been another matter and I would have needed to use Google Maps, Google Search as well as Field Trip and perhaps OpenTable for finding and booking some of the restaurants we visited. But to be honest, with a Google Glass instead of our real guide Ollie, I would have missed out on so much of the historical context and the funny anecdotes of which he seems to have endless stores inside his brain.

Ollie was the star of this entire tour, more so than even the food. His undying optimism, humour and friendliness shone through and kept me especially entertained. I think it was worth the price just to be entertained by him for three hours! The tour costs £65 per adult, lasts 3 hours and was well worth it in my book. A food tour is such an unusual thing to do in London that it’s refreshing and unique. With the whole capital suddenly becoming such foodies, I spy a sudden boom in the popularity of these food tours, so be one of the first and check out Eating London’s website.