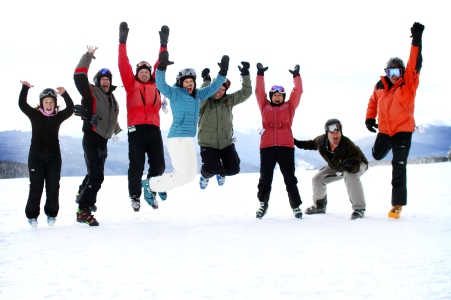 Imagine this: 1500 Durham University students, one resort, one week, three metres 3m of snow – ‘Palatinalps’. At first glance University ski trips such as ‘Palatinalps’ may strike fear into the heart of the well-seasoned and respectful skier, seeming to be little more than an industrious shipment of inebriated young adults (a.k.a ‘ski hooligans’) into un-spoilt and environmentally fragile mountain landscapes.

On the other hand, University ski trips such as ‘Palatinalps’, a name bred from the University of Durham’s newspaper ‘The Palatinate’, have provided thousands of near-penniless students with the opportunity of tasting a little snow and Alpine culture without having to face destitution. Not only that, but the relatively affordable ticket prices include holiday perks such as resort reps, food discounts, inter-collegiate racing, free-style and jumping competitions, and grand events with ‘big-name’ guests. Durham University’s ‘Palatinalps’ ski trip is no exception, growing over the last two years to become a collegiate expedition to rival the likes of Oxbridge’s ‘Varsity’ trip.

Having served on the ‘Palatinalps’ committee the previous year I was keen to experience the 2012 trip as your ‘average Joe’ punter. Punting, it turned out, involved taking a 24-hour coach journey and a student-infested ferry crossing to reach the Alpine resort of Les Arcs. Claustrophobia and leg-cramps aside, the trip out to the resort wasn’t as dire as anticipated, and was expertly coordinated by the ‘Palatinalps’ committee and the event’s operator (Off The Piste – OTP).

The accommodation which was included in the £349 base-price ticket (along with a lift-pass, travel and other perks) was a set of self-catering apartments that were ideal for the fun-loving and sometimes untidy youngsters. Whilst the accommodation didn’t provide us with the gourmet meals and on-site spas that some ski holidays may include, the flexible nature of the apartments did allow us to have a variety of different experiences; from eating in some of the resort’s famous mountain restaurants, such as L’Arpette, to slumming it with home-made sandwiches consumed on sun-bathed rocks.

The biggest advantage of travelling with ‘Palatinalps’ was, without a doubt, the socialising. For me, skiing wouldn’t be the same without the odd Vin Chaud sipped among friends… Throughout the week each college was assigned a rep to organise their social calendar, rally the troops every evening, and lead the otherwise ingénue students into the more exotic clubs and bars of Arc 1800. Special events throughout the week included the ‘Party on the Piste’ and the ‘Mountain Meals’, which were organized by the ‘Palatinalps’ committee and OTP, ending in style with the massive ‘Final Night Party’ and special guest ‘DJ Fresh’. The free-style competition showed off the more fearless members of Durham University, whilst the inter-collegiate ski races on the penultimate night put snow-sports on the map of the University’s sports championships.

On a more personal level, being able to ski with a number of my college peers over the course of the week was a really rewarding and unique experience. Never again will I have the opportunity of skiing with blue skies, powder snow, and more than 20 good friends. This excited and friendly buzz seemed to spread through the entire resort, and will probably serve the ‘Palatinalps’ crew for years to come.

We had a variety of different experiences; from eating in some of the resort’s famous mountain restaurants, such as L’Arpette, to slumming it with home-made sandwiches consumed on sun-bathed rocks.

One couldn’t visit Les Arcs and not appreciate the ‘township’ feel and the wonderful skiing that it has to offer. Lying metaphorically mid-way between the concrete jungle of Tignes and the isolated town of Courmayeur, Les Arcs provides the snow-lover with a vast expanse of well-connected and well-fed slopes, along with a variety of different skiing terrain. For the on-piste ‘bombers’ there are well groomed pistes, whilst ‘tree-dancers’ would be satisfied with the sweeter and leafier ‘Grizzly-esque’ slopes. If I were to mosey on back to Les Arcs I would be able to choose between the well developed and sociable resort of Arc 1800 or the dainty and quainter town of Vallandry (just 200m below). As both towns are well connected in terms of pistes and lifts, one would never be limited as to skiable areas. Indeed, the ‘Paradiski’ pass, which could be purchased as part of the ‘Palatinalps’ experience, also gives skiers/boarders access to La Plagne and, consequently, the gorgeous run from the top of Bellecote (at 3417m).

The only draw-back which I could pin-point from skiing on a university trip, as opposed to luxurious, guided holidays such as the ‘Fresh Tracks’ holidays offered by the Ski Club of Great Britain, was the lack of off-piste skiing. Without transceivers, shovels, and guides, off-piste skiing wouldn’t be wise. As none of these were available to us, there were many moments when my group and I would release longing sighs as we watched the experienced of the resort race off the piste and into a cloud of deep powder which we could not touch.

So, are we ‘ski hooligans’, or simply eager youngsters who are passionate about skiing? From the responses that I read on the faces of the local restaurateurs and residents, ‘Palatinalps’ is no more offensive to Les Arcs than the average week of a busy season. Indeed, I believe that this ‘student skiing’ is a market to be tapped into for many of the larger resorts and companies (the Ski Club is already an official sponsor). Yes, perhaps the University of Durham is a little tamer than your average British ‘college’, but I’m sure that the same ‘passion’ line could be applied to the members of SKUM (Manchester University) and NUUSC (Newcastle University).

Never again will I have the opportunity of skiing with blue skies, powder snow, and over 20 good friends.

The ‘Palatinalps’ crew are already gearing up for next year’s event with ‘resort launch’ parties and online videos. To those heading out there next January, the afore mentioned buzz will be there and you will be able to observe the huge amount of snow-sport talent that Durham University has to offer.

And would I go again, in my post-graduate state? Definitely.