The Hammam Al Ándalus – a Little Bit of Andalucía in Madrid

Three years ago, when I was living in Córdoba in the south of Spain as a student, I developed a small obsession with the Arabic Baths on Calle Corregidor Luis de la Cerda, near to the Guadalquivir River. For just €25 (student price) I could spend 1.5 hours relaxing in an Arab-inspired haven complete with hot, warm and cold pools, a hammam steam room, incense, candles, gently trickling fountains, herbal tea and on top of all that, the price included a 15-minute full body aromatherapy massage. Córdoba’s Hammam Al Ándalus was walking distance from my flat in the Judería, the UNESCO World Heritage old Jewish quarter and it proved so indulgent that I went three times in total, and once more when I returned to Córdoba for the Feria de Abril.

The same company also have Hammams in Granada, Málaga and Madrid, so of course I couldn’t wait to try out their Arabic Baths in my new home, Madrid. They’re very central, located near Puerta del Sol and have a very similar look, feel and set-up. You’re given a quick explanation about the benefits for your blood circulation of rotating through the various pools in a certain order (cold pool at 18º, although it feels much colder, warm pool at 36º and hot pool at 40º), and you’re then set free to explore the numerous rooms and candlelit passageways.

They’ve recreated how the baths would have looked centuries ago when large parts of Spain was under Moorish rule, back when Madrid was called Mayrit. However the Moors had simply borrowed and adapted the idea from the Romans, who were the first to realise the benefits of thermal waters. During the Reconquista when the Christians ousted the Moors from the Iberian peninsula, all the hammams were closed or destroyed, and the practice fell into complete obscurity. But the tradition has now been revived in these four cities and I couldn’t be more glad that it has! 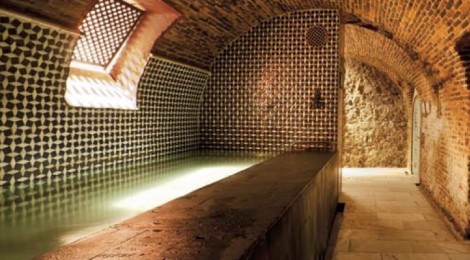 Within 10 minutes you’ll have entirely forgotten about the outside world, as your only worry becomes how to muster enough courage to plunge into the freezing cold pool! I’m a wimp so only managed it for a couple of seconds at a time, but it does feel good to complete the circuit properly. About half way through our session we were summoned by our masseuses and given a choice of aromatherapy oils: lavender, red amber, rose or violet, which you can test in an antechamber before your massage. I have a particular addiction to massages (thanks to my equally addicted mother, who got me hooked from an early age) and they are one of the few treatments I think are actually worthwhile. I don’t get my nails, eyebrows, etc. done professionally, but massages, yes in my opinion, are worth it.

Madrid’s Hammam Al Ándalus didn’t disappoint. The layout is different to the one in Córdoba, which has one large square warm pool, whereas Madrid’s is a long thin warm pool that leads to the hot pool. But I did prefer being massaged in a private room, as opposed to in the open in the main room, as I was in Córdoba. As we went to Madrid’s Arabic Baths at the weekend, it was potentially a little too busy for my liking, and the prices are marginally higher than down in the south of Spain. 1.5 hours in the baths and a 15-minute massage will cost you €43 in Madrid, although there are discounts for students and residents.

I would highly recommend it to anyone who values time out to relax in beautiful surroundings, as I felt instantly renewed and refreshed afterwards. I liked it so much that I suggested it to the Guardian newspaper, who published my tip in their article ‘Hidden gems in Madrid: readers’ travel tips‘. I only wish that Hammam Al Ándalus could expand to London and the UK too!