Postcard of the Week: Home Sweet Home in London! 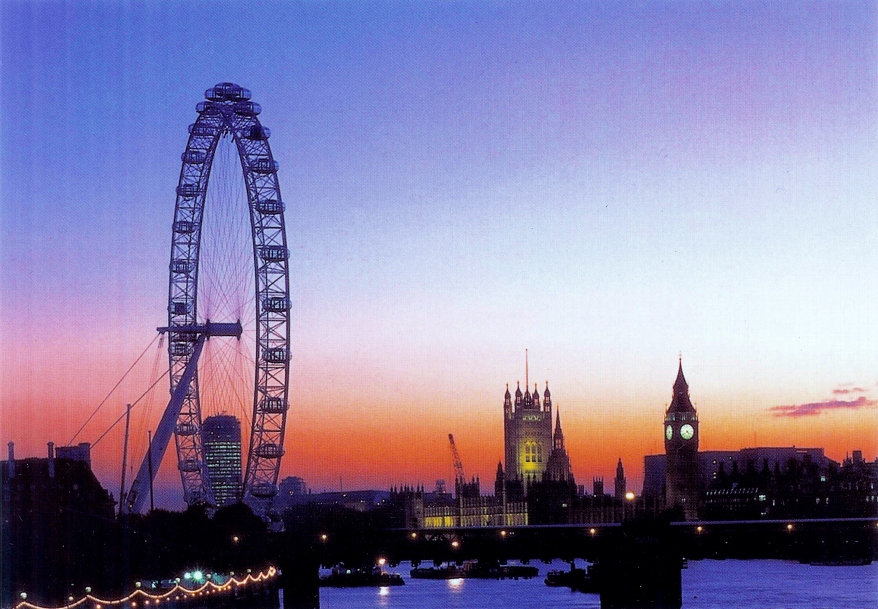 I thought it fitting that on my first Monday back living in the Big Smoke (aka capital of England, aka one of the best cities in the world) I should have a Postcard of the Week from no other than London itself! Despite having posted over 100 postcards (!) since starting this blog of mine, there has never once been a postcard purely about London. There have been a few postcards from specific places within London, but not one all-consuming one. So here we have a postcard that I received a whole five and a half years ago in winter 2007 (yes, perhaps I hold onto my postcards a little too long). I was living in the Italian Alps at the time on my gap year, doing my ski season in Courmayeur. A school friend had just started uni in London and wrote to me in Italy on the back of this postcard, asking after my progress with snowboarding and challenging me to a ski race down the slopes.

More importantly though, this postcard aptly represents the image I had of London as a teenager, years before I would actually move there in 2012. Coming from the sleepy countryside in Hampshire, to me London was grown-up, sophisticated, glamourous, exciting and alive. I had wanted to study at university there myself, fantasising about London as absolute freedom away from my parents, a place where ‘things actually happened’. My father dissuaded me from going to study in London, as I would have only been an impoverished student, and instead I was happy to spend 3 years in adorable Exeter. In hindsight I did the right thing. I have the rest of my life to experience London (and it’s far better with some disposable income, trust me) whereas there’s frankly no reason for me to go and live in Exeter between now and my retirement (at which point I’ll probably up sticks to Italy anyway).

But to get to the point, the truly important message behind this particular postcard is the fact that at 18-years-old I had only seen certain polished parts of London, the parts a tourist or day-tripper would visit, or the elegant parts shown in films, and therefore my image of the city was idealised and distorted. We’d been to shop in Harrods and Hamleys, to see The Lion King and Cats in the West End, to various important museums on school trips, to the odd birthday party in a smart area of London, to tourist-filled Camden Market and Covent Garden, to the suburb of Wimbledon, to the London Eye and this very scene in the postcard, and little else. In reality, in all of the 18 months I spent living in London before moving to Madrid, I don’t think I once saw the sunset from this exact angle.

But despite the fact that I don’t live bang in the centre of London, where my 17-year-old self would have pictured me living, London has actually exceeded my expectations. London is an absolutely incredible city, and it has taken moving to another European capital for me to realise that. Go anywhere in Europe and ask people where is top of their cities to visit – I can guarantee you London is on that list. We Brits take London for granted, because it’s always there for us, but there are very few other world cities that can match London, and it is arguably the most important city in Europe.

I can’t wait to get settled back into London and pick up everything that has been paused during my six months in Madrid. I have been making lots and lots of plans, meaning that my next few months will be busy and exciting with plenty going on and plenty to blog about! Not least I’m looking forward to catching up with all my London friends who I’ve missed a lot. I’m excited to be back and I love that newly-arrived feeling, as if I’m just starting another adventure.

If you’ve been to London or lived here, what did you think of it? Do you love it as much as me or do you think I’m seeing it through rose-tinted glasses?