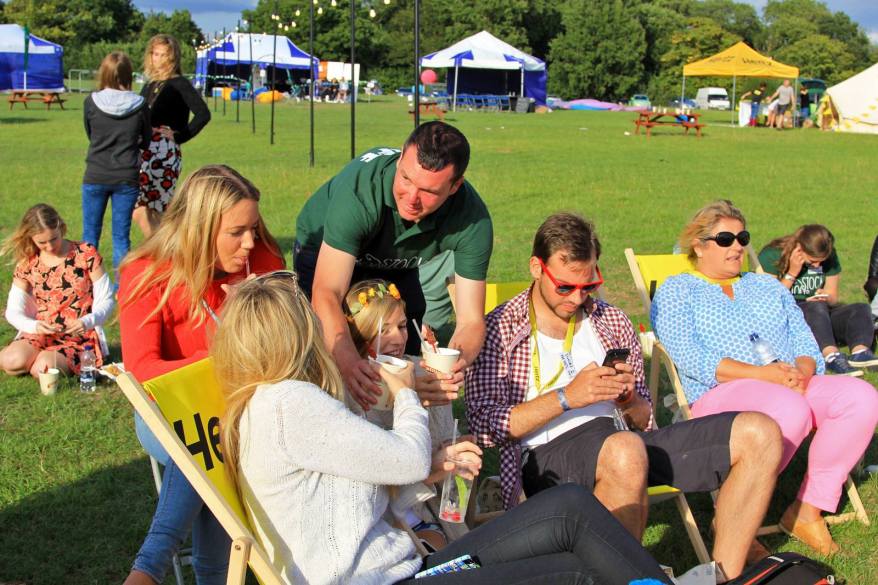 Barely a week after moving back to London from Madrid, and I was already off again out of the city! This trip wasn’t quite so far afield for once, although it did involve a field. It was in fact a trip to the Middlesex countryside, to the north-west of London, to attend Blogstock. My non-blogger friends universally perceive we bloggers to be nerds and geeks glued to our screens (very erroneously!), so the concept of a blogging festival elicited laughs and jests all round. In actual fact I didn’t see a single blogger tapping away at a laptop all weekend.

Blogstock grew out of a Travel Blogger Meet-Up in London called Travel Massive. They’re after-work events to network, catch-up on everyone’s travels and meet new bloggers. Quite the opposite of socially-awkward nerds, travel bloggers are in fact an incredibly interesting breed of person: they like to travel lots, they have confidence and great social skills developed through surviving in so many unfamiliar countries and cultures, they’re worldly and have an interest in international affairs, and they all like writing, creativity and social media. What’s not to love? 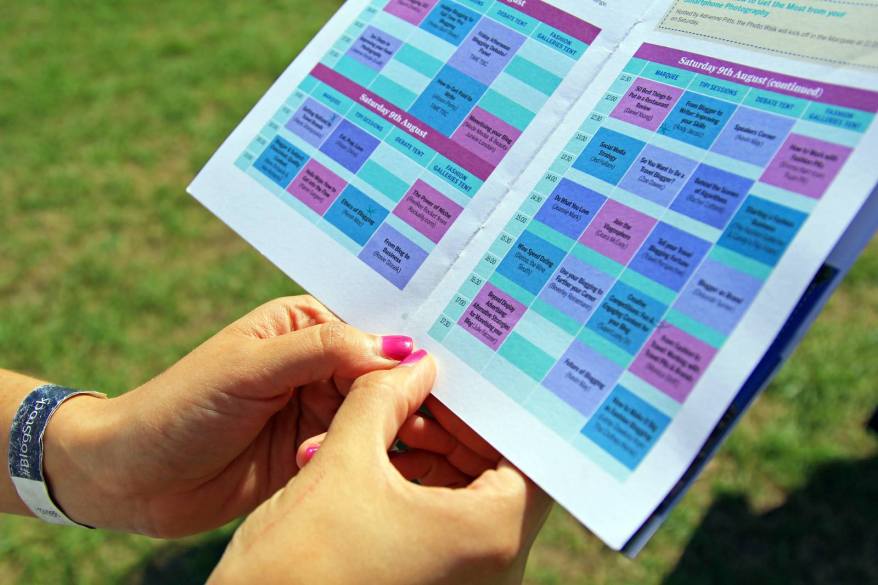 For me, Blogstock was a great opportunity to catch up with all the fellow bloggers that I hadn’t seen for six months while living in Madrid. I wanted to hear about all their numerous adventures and to find out what’s been going on in the travel blogosphere. Madrid is definitively behind the times when it comes to new forms of digital media, and there just isn’t the same travel industry buzz over in Madrid. Blogstock, the world’s first ever blogging festival, I should mention, is based around a series of talks, debates and seminars on the art and science of blogging. However, instead of the formally scheduled events, I personally got more out of seeing the people I already knew and meeting those I didn’t. 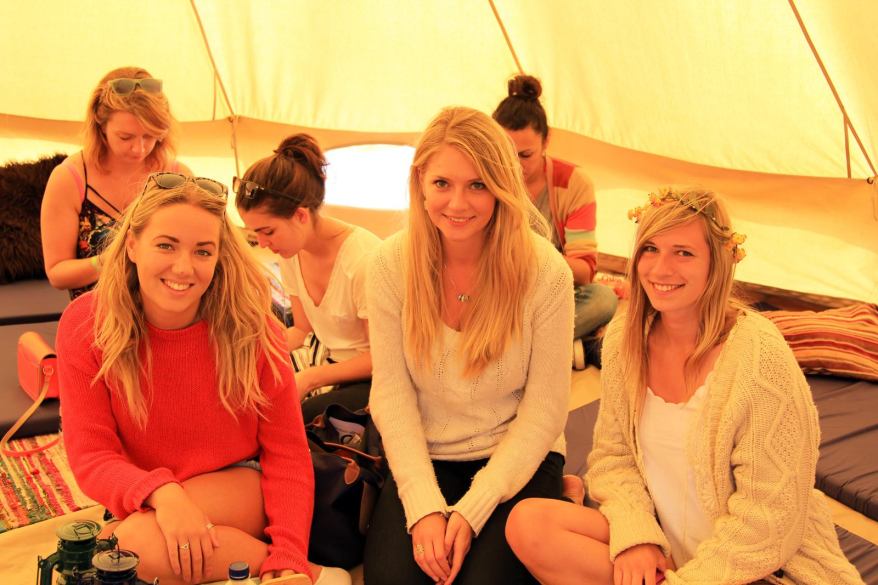 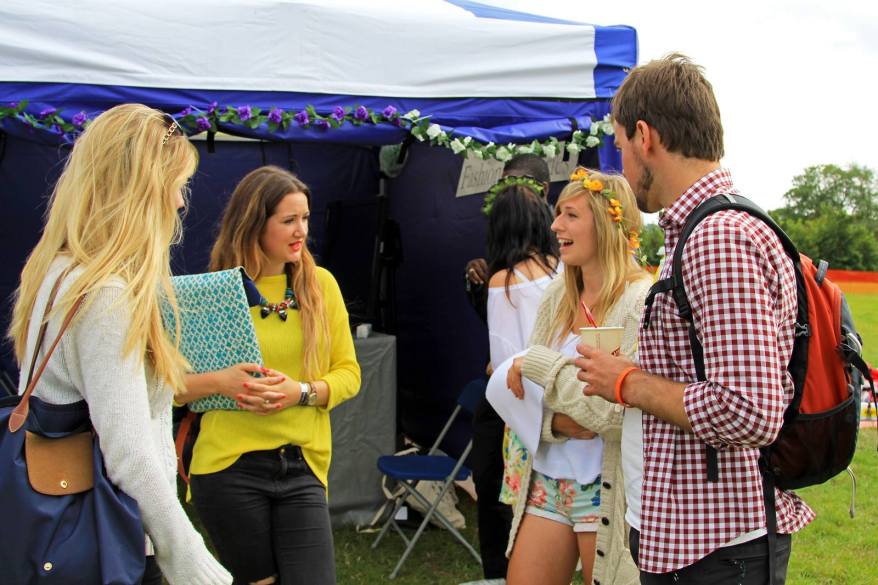 I arrived on the Friday after work in the midst of an absolute downpour. You can always count on the British weather to pick the wrong moments. To top it off I’d actually forgotten an umbrella and my wellies were elsewhere, so within a few minutes of walking to the field near Elstree I was drenched. Thankfully the wonderful people at Hertz had invited me to stay in their VIP camping, which included a large bell tent ready and waiting for me, meaning I didn’t need to fiddle around in the rain trying to put up my own tent. Inside the spacious tent things looked distinctively more ‘glamping’ than camping, with little lanterns, cushions, a throw, a little table and some welcome snacks. In advance they had also sent me a portable power pack, which can charge your phone on-the-go or whenever you find yourself far from a plug socket. Finally sheltered from the rain, I changed into dry clothes and settled into my new pad for the next two nights before joining the others in the main marquee, to party away the rest of the night and forget about the weather. 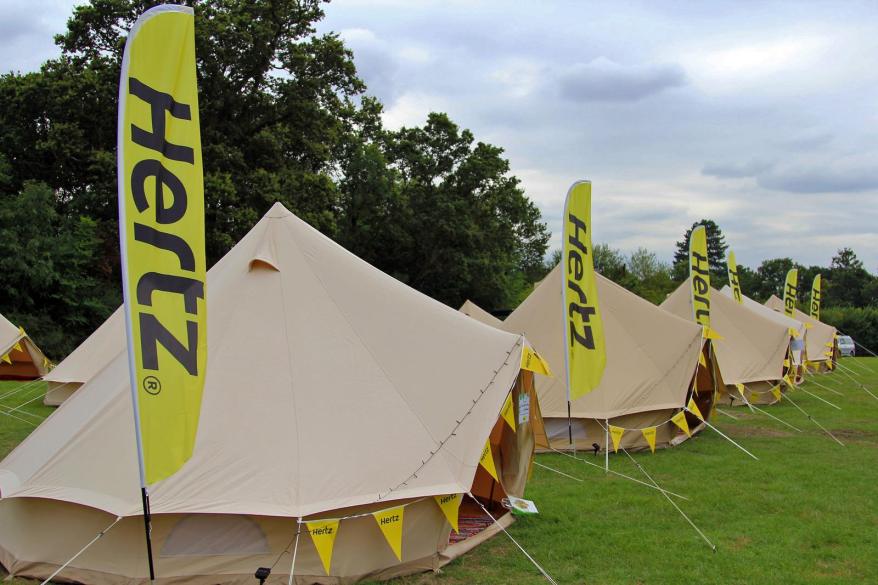 Next morning the sun was beaming and the day got started with talks and blogging tutorials. Alongside travel bloggers, there were also food, fashion, mummy and even fitness bloggers, and mostly women to be honest. Is this because men simply don’t blog? I don’t think that’s actually the case, but I am interested in the reason for the gender imbalance. Does anybody know?

Out of over 30 different scheduled talks, I personally attended the following: a talk from Contiki on ‘Getting Noticed by Travel Brands’, a panel debate on the ‘Ethics of Blogging’, a talk by Andy Jarosz on ‘Improving Your Writing Skills’, an unimpressive and irrelevant talk on ‘Blogger as Brand’, a talk by Beverley Reinemann on ‘Using Blogging to Further Your Career’ and a brilliant session with Julie Falconer on ‘Alternative Strategies for Monetising Your Blog’. 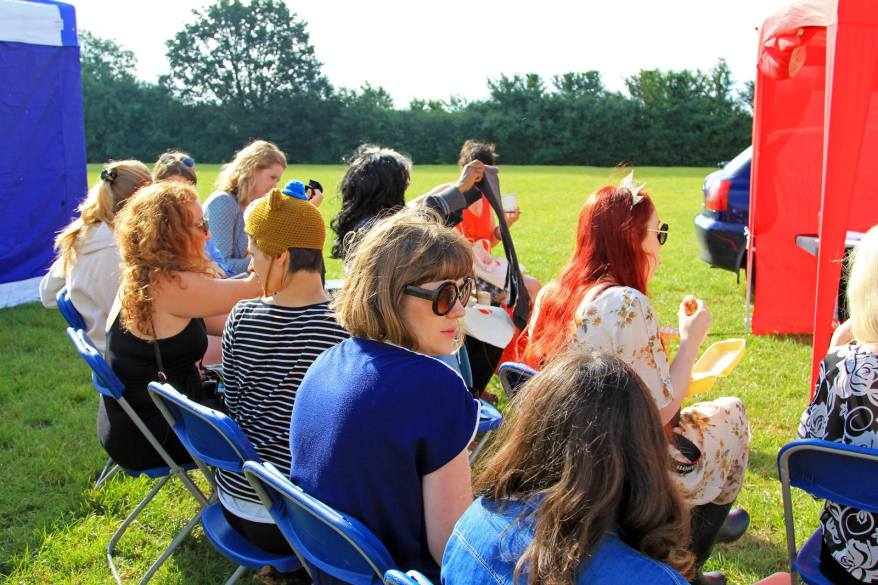 But my favourite of all was the final panel debate held in the sunshine at the end of the Saturday. Arya Alatsas from Nuffnang, Jill Lloyd from Expedia along with bloggers ReeRee Rockette and Paul Dow discussed the future of the blogging industry and my main takeaways were:

Throughout this last debate Appleton Rum (one of the festival’s sponsors) were running a fantastic service: send them a tweet saying you’d like a drink and they’d deliver a free rum & ginger cocktail to your very deckchair! Our particular group slightly abused their generosity as we all took to Twitter en masse. The sun was shining, I had a delicious (free!) drink in my hand, I was surrounded by like-minded people, and discussing a hobby which I love and dedicate a huge amount of my spare time to, not to mention all my annual leave.

The rest of Blogstock was more relaxed, with everyone by now more interested in winning the pub quiz and scoring free drinks than in learning about blogging. Our team did shockingly badly and even won a consolatory bottle of wine as a wooden spoon. But I did meet lots of new people (Simon, Jess, Flora, Nicole, Kasha, Ayla, Alicia among others) and caught up with lots of others I already knew (Michael, Macca, Vicky, Monica, Kirsten, Jen, Dylan, Annora, Julie). That night after a lot of ‘tent-hopping’ (the camping equivalent of bar-hopping) I settled in for an excellent night’s sleep in my luxury Hertz tent, and I awoke the next day to see the familiar English sight of a thunder and lightening storm. Joy. But Saturday’s sunny weather was a blessing as the main day of the festival was in no way spoiled by the downpours of Friday and Sunday. The event was a huge success and I’m sure next year’s Blogstock will be just as good!