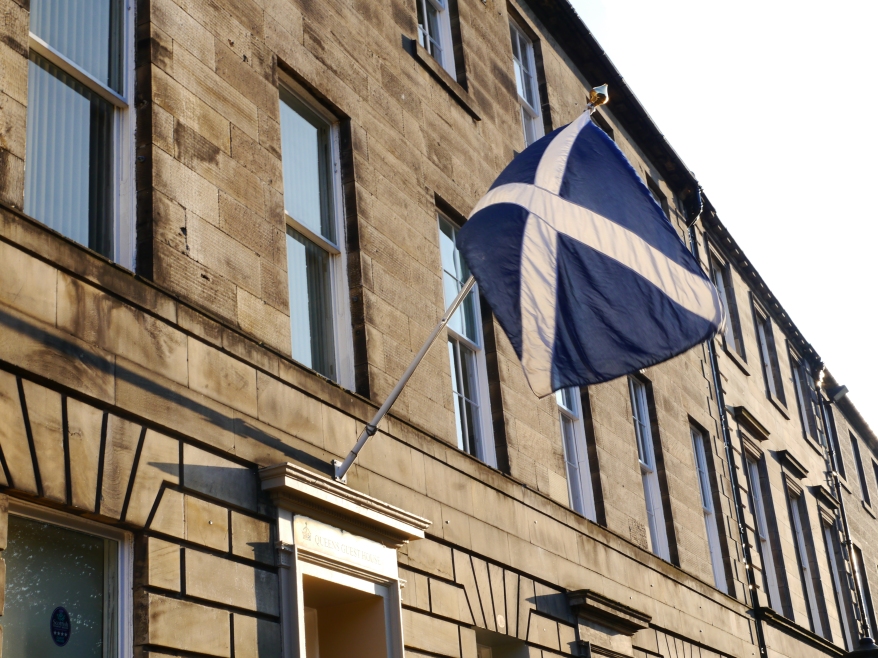 Today is a pretty important day in British history – Scotland have voted to stay in the United Kingdom, although it was close shave! They ended up voting 55% against independence, and 45% for independence, which is obviously a huge relief for everyone south of the border. A couple of weeks ago I popped up to Scotland, and I thought today would be a good day to post an article about my trip to Edinburgh, now that we know that Scotland is firmly part of the UK and will remain that way.

Way back in July 2013, I wrote about a competition to win a weekend in Paris, which was being offered by luxury travel specialists Black Tomato.

The winner, Katie MacLeod of the blog Stories My Suitcase Could Tell, is one of my readers and as I’d been the one to let her know about the competition, Black Tomato kindly gave me a weekend in Edinburgh! This included a pair of flights, two nights stay in the 5-star boutique hotel Nira Caledonia and a 3-course dinner in their restaurant, the Blackwood’s Bar & Grill. I’d been hoping to travel up to Edinburgh during the famous Fringe Festival in August (see my friend Caro’s post about the Fringe here) as I’ve never been, despite the fact that my very own sister has performed in it two years in a row. (My excuse is that I was living abroad both summers). However the hotel sadly said August was off the cards, so we travelled up the first weekend of September instead.

I had been to Edinburgh once before, aged 18 with my mother, to look around the university, as I had been hoping to study there. But we barely saw the city, instead visiting faculties, halls of residence and student union buildings. So Edinburgh was practically a new city to me. My only other experience of Scotland was a trip up to the Highlands this January with friends, which was one great big lot of stunning snowy scenery. Friends and fellow bloggers, including Katie MacLeod (herself a Scot), had given me their tips and suggestions for the Scottish capital and my boyfriend, who I invited along for the trip, had spent a few weeks working in Edinburgh so he knew it well. 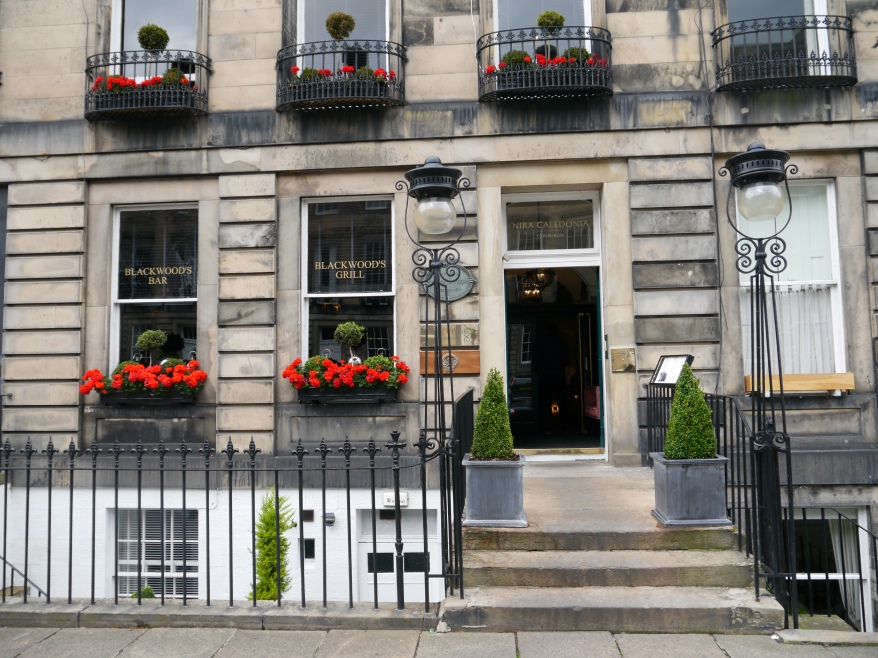 We arrived at the Nira Caledonia hotel in Gloucester Place, in the New Town part of Edinburgh, whose grand Georgian architecture is anything but ‘new’. The hotel has just 28 rooms and occupies a couples of townhouses. The hotel had kindly upgraded us to one of their two Jacuzzi Suites, which we were obviously thrilled about! No sooner had we explored the suite, we were presented with champagne to welcome us! A seriously good start to the weekend. The suite has 4 rooms, the main bedroom, an ante-room with sofa, wardrobe and TV, a small bathroom and the jacuzzi room, complete with two rubber ducks. 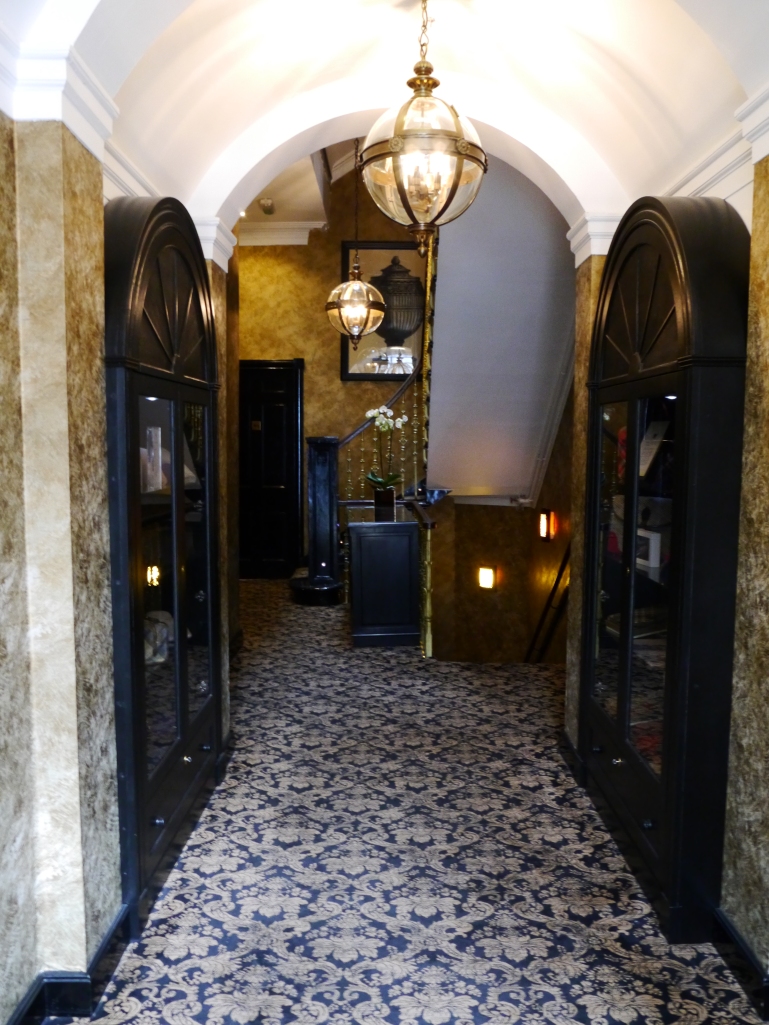 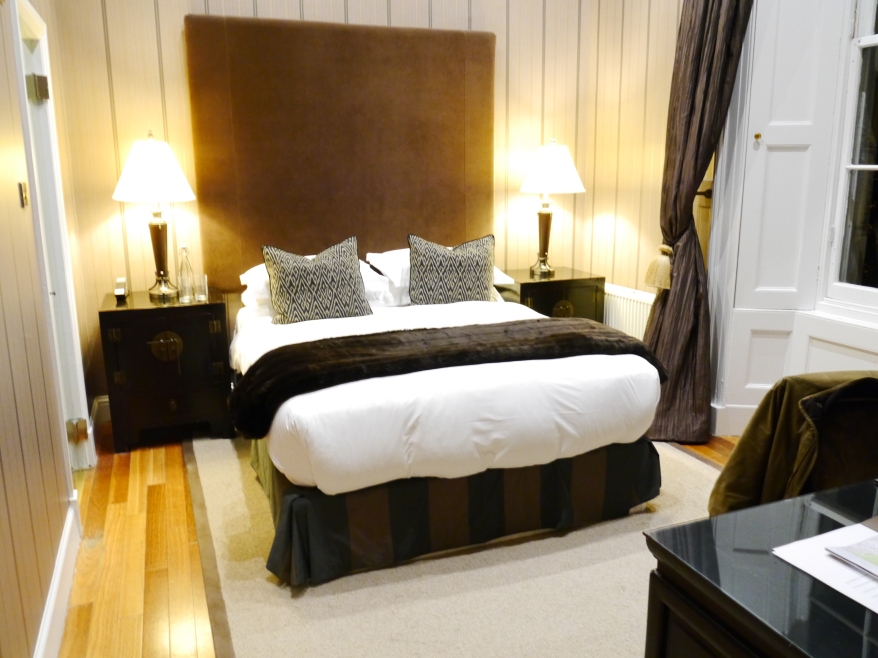 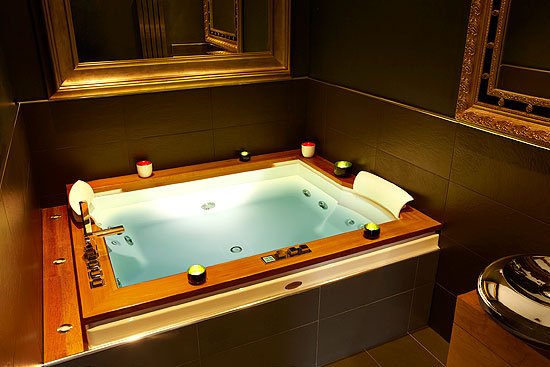 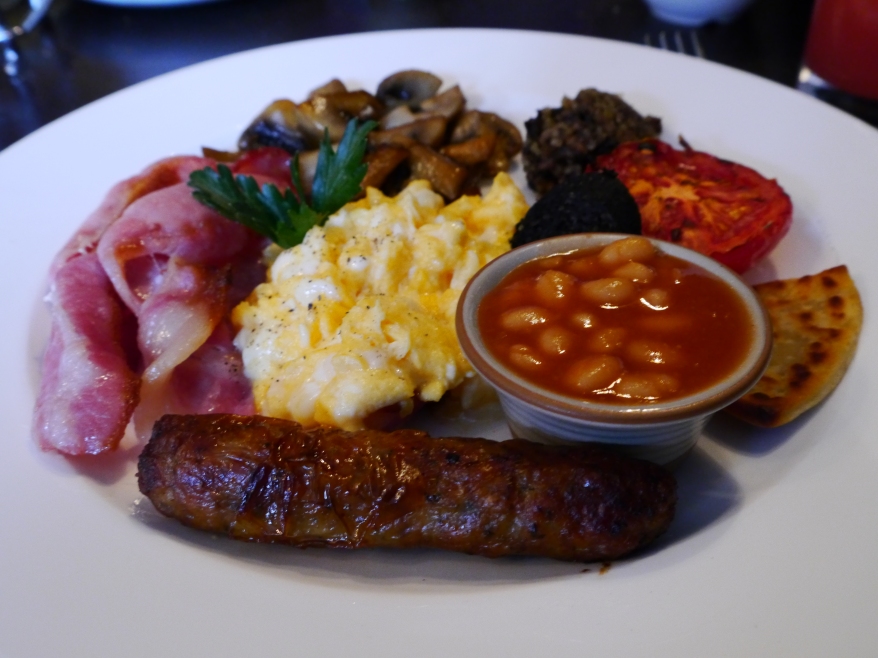 We were surprised to find the jacuzzi was in a separate room and as it takes 20-30 minutes to fill up, I’d recommend that turning on the tap be the very first thing you do! The jacuzzi proved perfect for lie-ins with a newspaper and Classic FM (middle-age, here I come) since the hotel continue serving breakfast until midday – miraculous! Indulging in a Full Scottish Breakfast (with a spot of haggis to boot), it was afternoon before we made it out into Edinburgh, and we made a beeline for Princes Street Garden and the Royal Mile, to get to Edinburgh Castle, perched formidably atop the city. 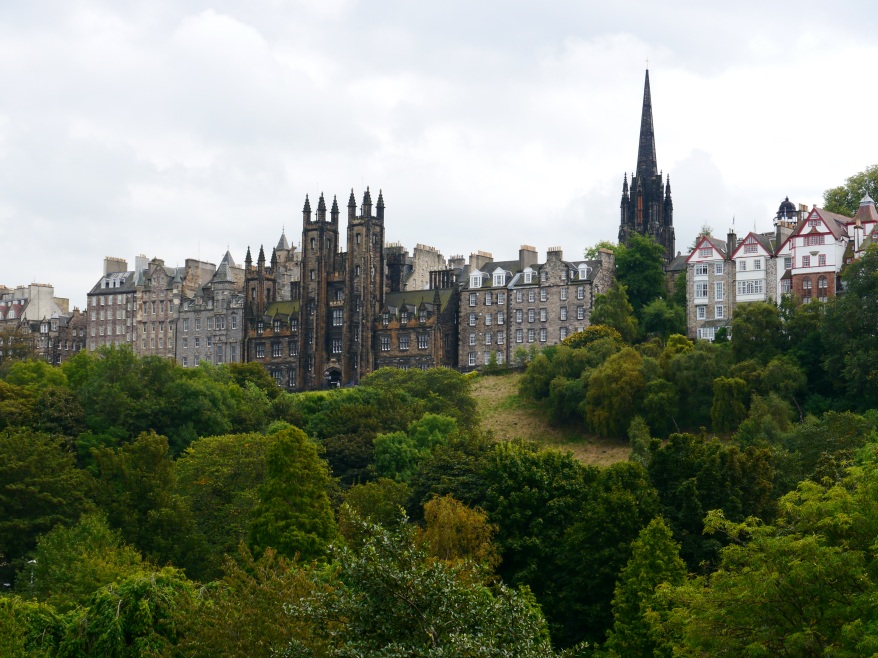 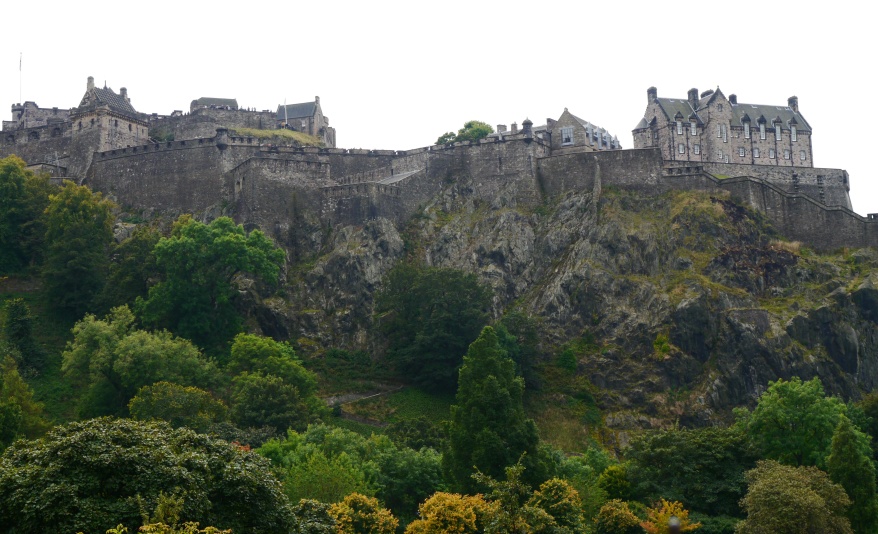 Edinburgh Castle tells the history of the many Scottish wars against England and the plight of the Scottish monarchs up until 1603, and it was particularly pertinent to learn about said history at a time when the Scots were deciding , pre-referendum on the 18th September, whether to leave the United Kingdom and become an independent country. As an Englishwoman, I am very much a Unionist, but during our stay in Scotland the ‘Yes’ vote overtook the ‘No’ vote in the polls for the first time – it was a seriously worrying headline in the newspapers. 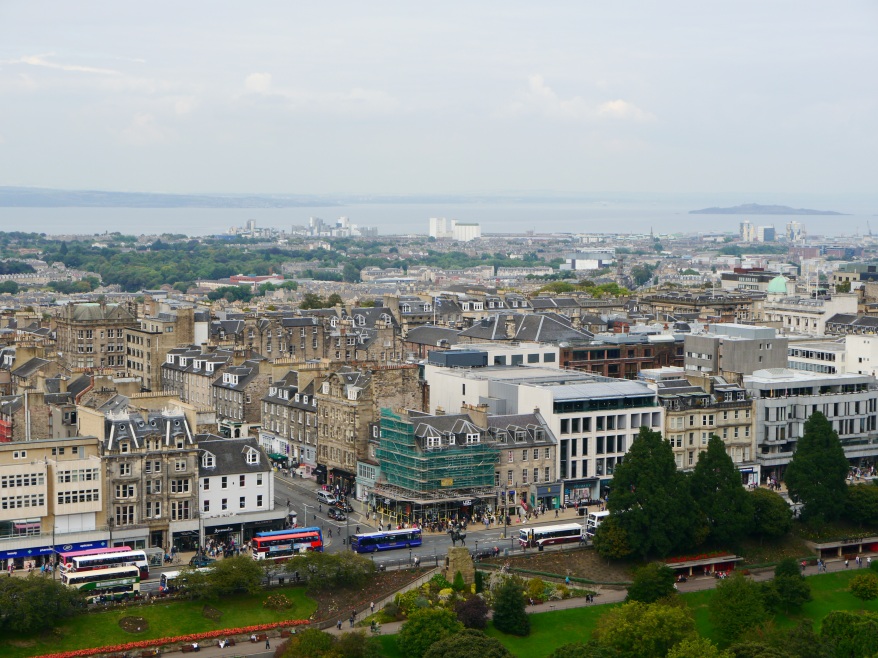 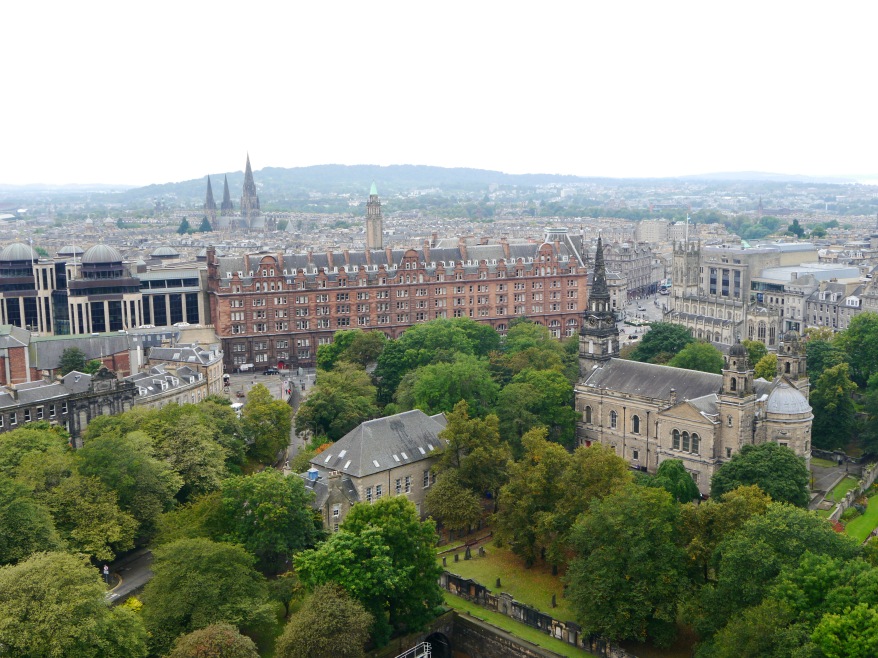 Although the entrance fee is steep (£16 for an adult, excluding any sort of guide) the views from the castle are spectacular and I can see why so many weddings take place there. There were bagpipes, kilts, wedding dresses and saris galore. Afterwards we walked the length of the Royal Mile (a blur of tartan, cashmere, souvenir shops and pubs) to Hollyrood Palace, the official residence of the Queen in Scotland. After London, it’s so refreshing to be able to cover Edinburgh completely on foot, surrounded by the old, romantic and grandiose architecture. We meandered our way back to the hotel along cobbled streets, past adorable mews and by well-tended gardens. 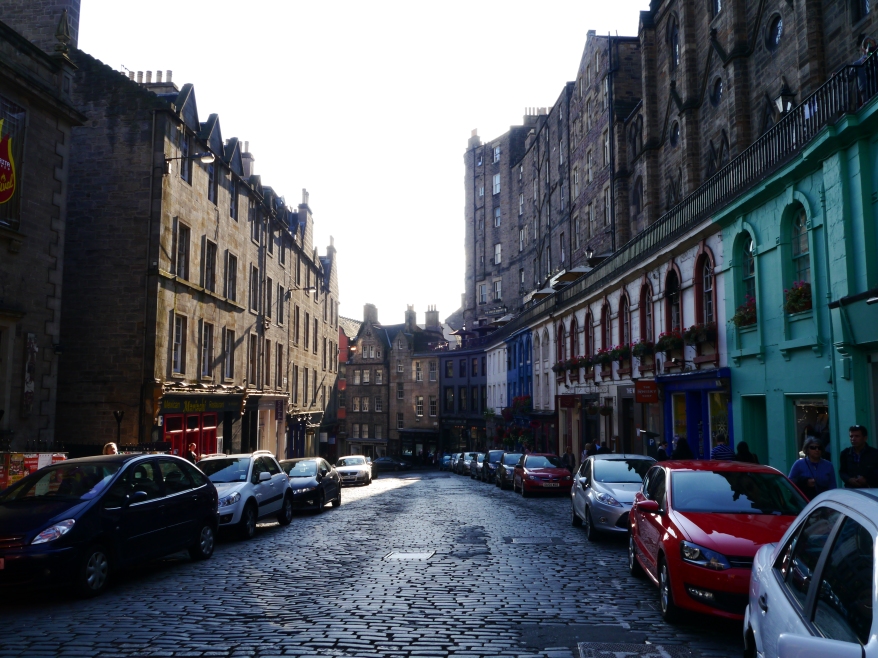 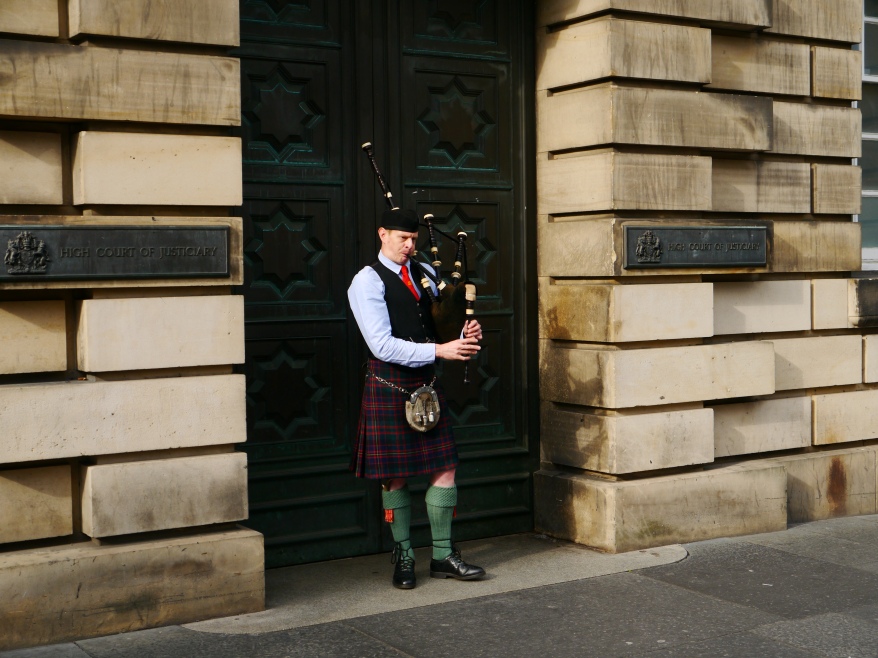 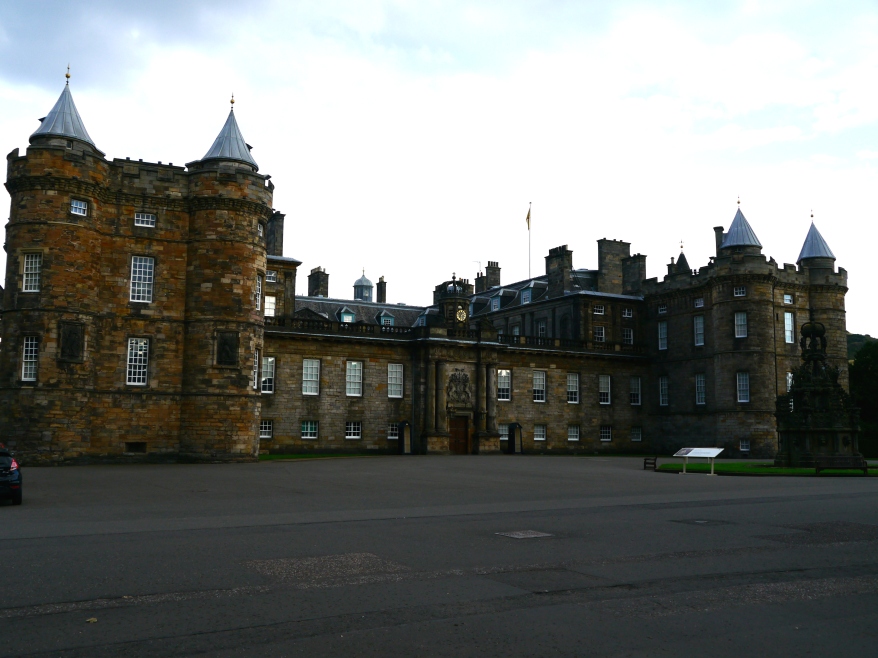 We may have had another jacuzzi (it is there, after all…) before our dinner in the Blackwood’s Grill & Bar, which is surprisingly good for its size. The dining room is intimate, with space for only 30 or so people, and decorated in dark tones to create a luxurious and elegant atmosphere. Right up my street, I love a formal occasion and a reason to look smart. After a prawn amuse buche, I opted for the chicken liver parfait, then an exquisite fillet steak, finished up with a frozen nougatine dessert with tuile and pistachio cream, polished off with a glass of white dessert wine. Wanting to see something of Edinburgh by night, we headed to Panda & Sons, a cocktail bar recommended universally by everyone single person I spoke to about Edinburgh! Its unusual concoctions have won scores of awards and certainly packed a punch. We were then en route to Lucky Liquor and the Last Word, two other highly recommended bars, but Edinburgh’s bar shut up shop earlier than London’s meaning we timed it wrong and were too late to get in.

On Sunday an even longer lie-in ensued, before we bid farewell to our jacuzzi, tucked into another Full Scottish breakfast and checked out of the hotel. Under a big bright sun (something Scotland is not usually known for) we headed up towards Arthur’s Seat, a giant hill 251m above-sea-level just to the east of the city centre. It took us a good hour or so reach the top and descend again, but from the highest point you can see all of Edinburgh, over to the other side of the stretch of water and far into the distance. It was a lovely clear day and my nose even ended up a little sunkissed. The hike slightly took it out of me to be honest and my legs certainly felt wobbly at the end of it. In total that weekend we walked 36,308 paces (according to this app on my iPhone so I think that’s quite fair! 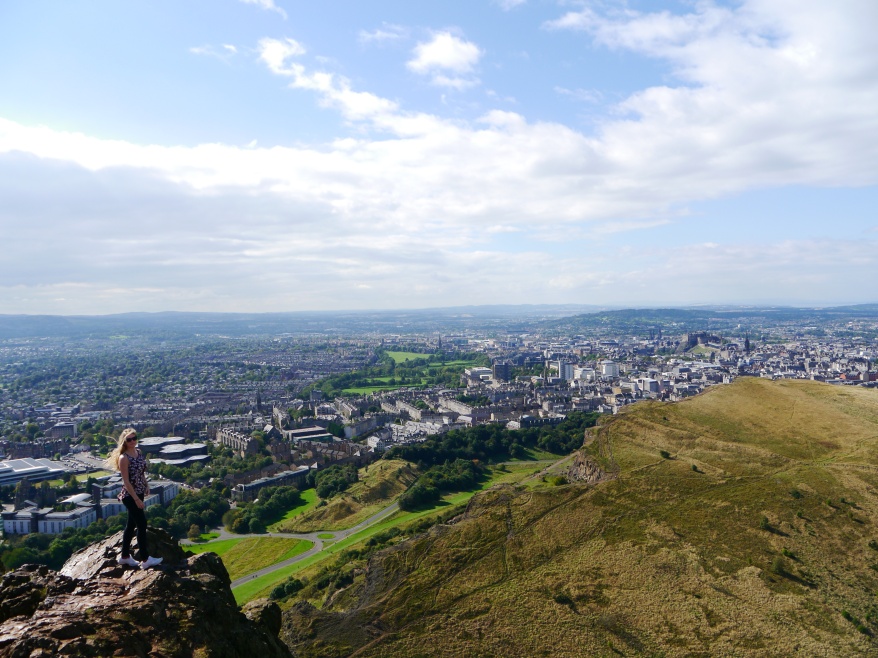 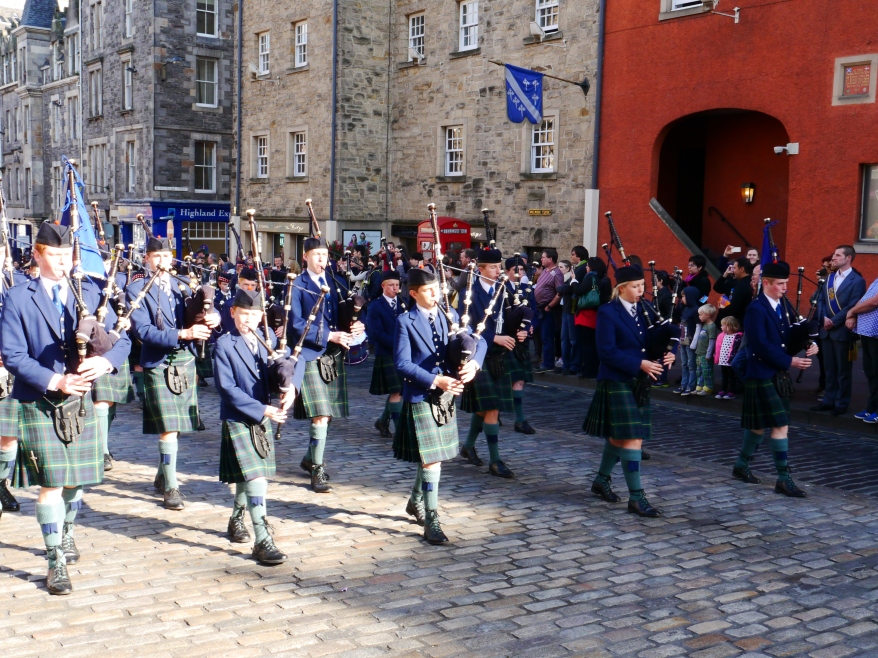 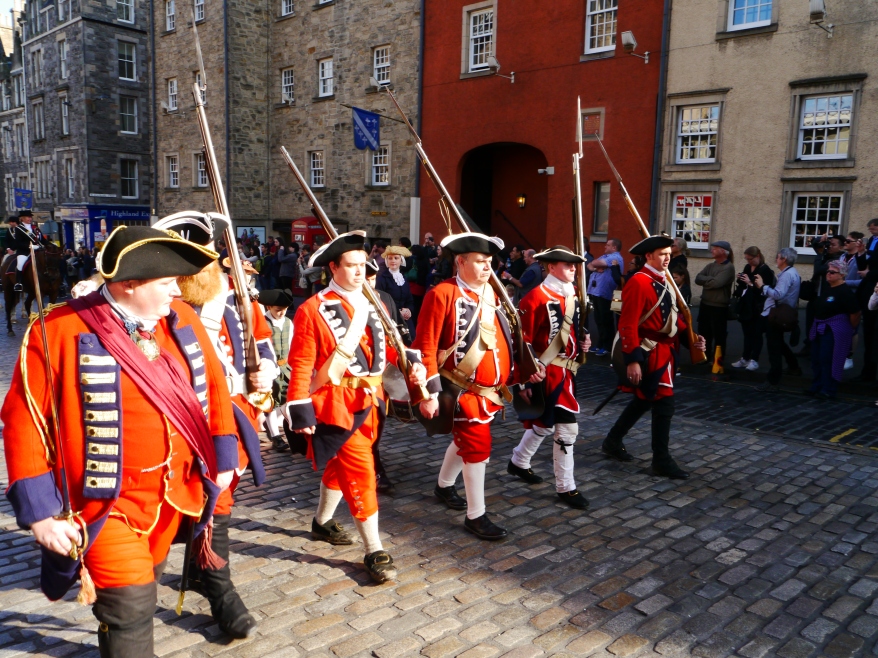 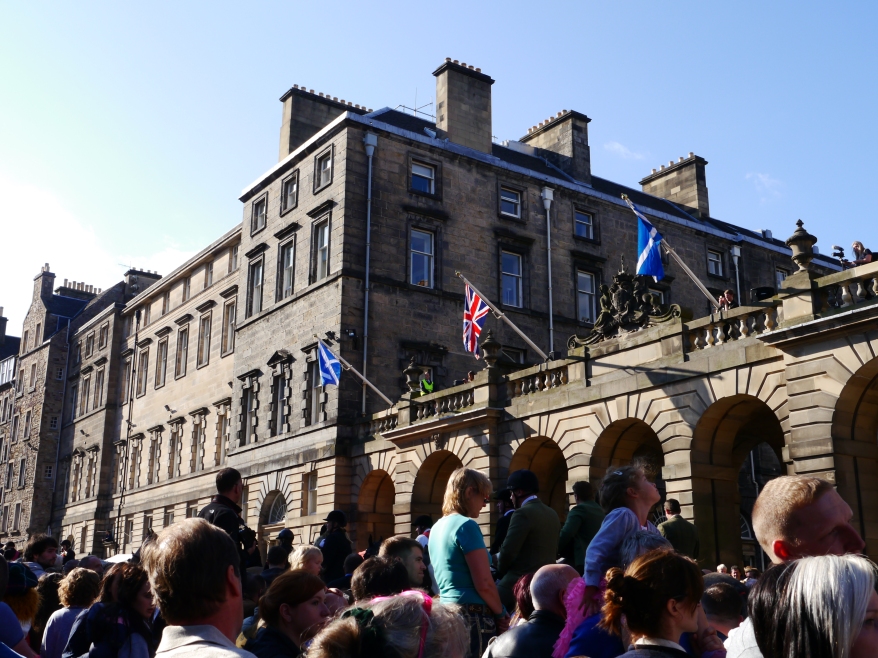 Following another recommendation from Katie we headed to Grassmarket for a late alfresco lunch in the sun, continental-style, before meandering our way home to the hotel, stopping in one last venue for a rather infamous Scottish pudding: a deep-fried Mars bar. Yes you read that correctly. Simon, of the blog Simon’s Jam Jar, suggested Cafe Piccante as the place to eat this curious and obesity-inducing dessert. Do the Scots not find a Mars bar tasty enough on its own? Apparently not, as they smother it in batter and deep-fry it, paired with a few scoops of vanilla ice-cream, which apparently comes to an astonishing 1,200 calories… I have a very sweet tooth so never imagined I could be defeated by a pudding, but I’m sad to admit that it happened. Be warned – it’s overpowering. I spent the whole of the rest of the day feeling heavy, lethargic and a bit ill. But at least we tried it and know never to do so again! 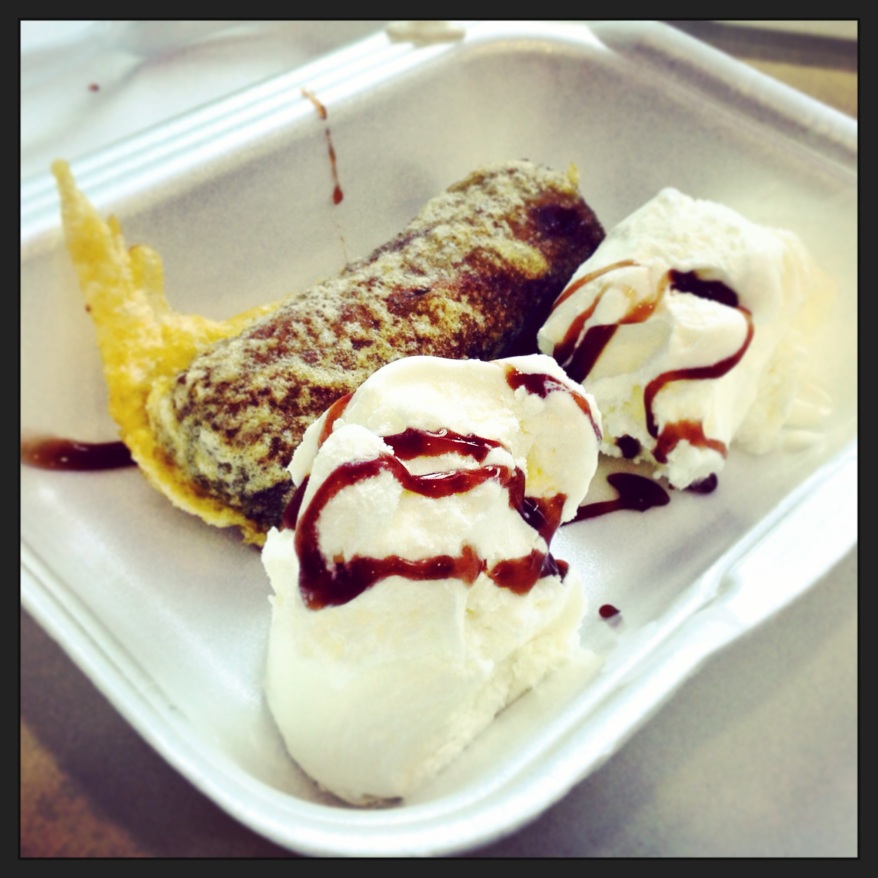 And so our weekend drew to a close and we popped back to London on a very swift 80-min British Airways flight. Having seen how beautiful and relaxed Edinburgh is, I can now see why people gush about it quite so much, and I wouldn’t mind living there for a spell myself. It made me extremely proud to have Scotland as part of the United Kingdom, and more desperate than before for the ‘No’ vote to prevail in the referendum on Scottish Independence. It would have been a terrible shame to split ways with a country that is so very like ours in so many ways, yet also has its own history, its own unique traditions and which constitutes a valuable contribution to our British heritage. Thank goodness they came to their senses and voted ‘No’! 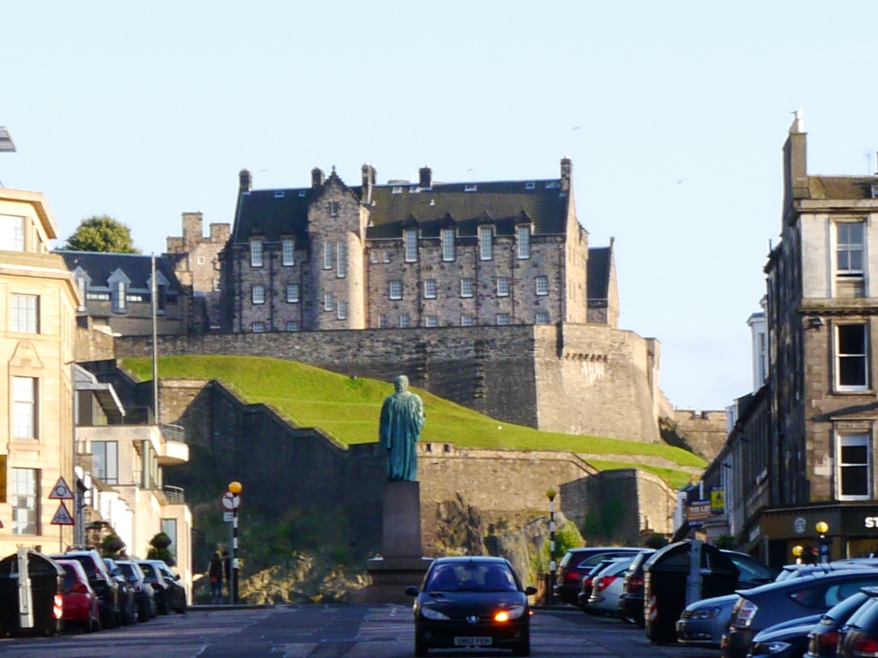 Regardless of the vote, Edinburgh will remain a beautiful city that every Brit should get to know at some point, and it’s a pleasant reminder that London is not the centre of the universe, and that there is plenty of life and excitement beyond the M25 as well. I think London is very good at its propaganda, letting Londoners believe it’s the only place in the world they need to be. I’ve been reminded that that is definitely not the case, and I would love to explore a bit further outside of the reach of the Underground map.

Have you been to Edinburgh and if so what did you love most? What’s your view on the referendum on Scottish independence – are you relieved by the verdict or disappointed?