Help to #EndChildMarriage by wearing the Plan UK ring

You might have seen the #EndChildMarriage adverts featuring Eliza Doolittle supporting Plan UK, an internationally-focused charity who are campaigning to end child marriage. By donating £5 to Plan UK, you’ll receive a ring in the post to be worn on your wedding ring finger. I love the concept behind this campaign as it’s a perfect conversation starter and way to spread the word about the cause. If I saw a friend of mine out of the blue wearing a ring on that finger, I would 100% ask what the ring is, thereby giving her (or him, to be fair) the opportunity to talk about Plan UK and the terrible injustice they’re attempting to combat. Please do engage in the #EndChildMarriage campaign by giving child marriage the finger: 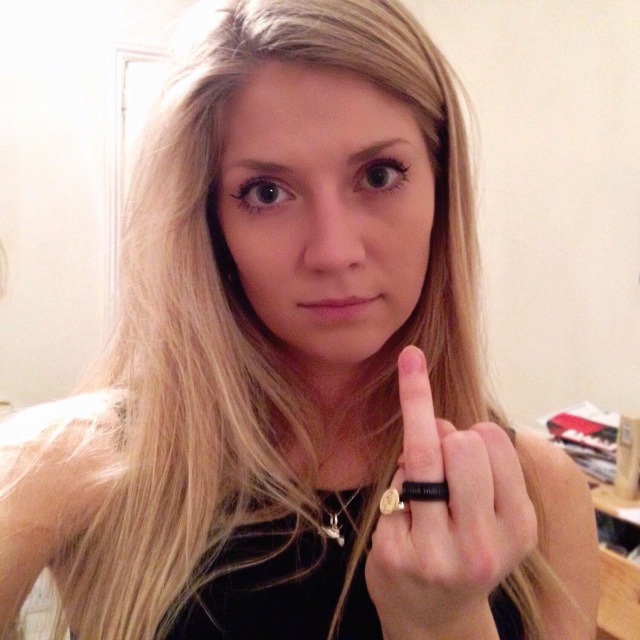 After seeing the adverts, it was a blog post by Travel with Kat, that finally spurred me into action and to donate. I later discovered that Kat is a Digital Ambassador for Plan UK. I had come across Plan UK beforehand as I met the CEO Tanya Barron at the One Young World summit in Johannesburg in October 2013. I had signed up for a breakout session hosted by Tanya on child marriage and FGM (female genital mutilation) in West Africa, and I was speechless.

130 million girls and women are living with the consequences of FGM worldwide. An estimated 65,000 girls under 13 in the UK are at risk of FGM. Every 2 seconds another girl is forced into marriage.

I can’t imagine anyone will read those statistics and cease to be shocked and immensely saddened. Women and young girls living in poverty in developing countries are the most abused worldwide, with the highest likelihood of having their human rights violated. As a girl myself who thankfully experienced an idyllic, safe childhood in the UK, I feel disgusted by those statistics and incredibly grateful (while also guilty) for all the privileges I took for granted while growing up in a very safe environment. It’s our responsibility to help those that are less fortunate than us, and 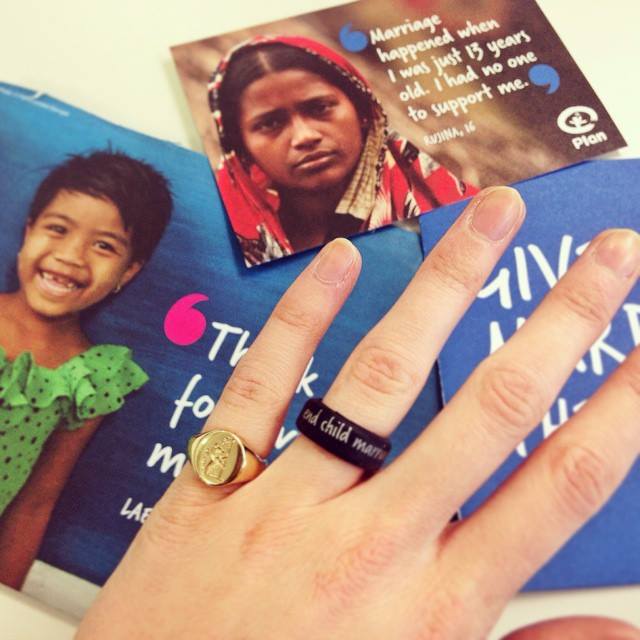 Plan UK’s Because I Am A Girl campaign aims to end child marriage and within a generation by working in 50 of the world’s poorest countries by empowering young girls to stay in education; helping communities to declare themselves child-marriage-free; influencing local laws; putting pressure on governments and decision-makers to make changes that benefit the lives of women and girls. On this particular campaign Plan UK is particularly focusing on Malawi, Zimbabwe and Bangladesh. Your donation and support for the campaign are invaluable for Plan UK – not only are you doing your bit to raise collective awareness and challenge discriminatory attitudes and beliefs towards girls, your donation also goes towards a specific project, such as one in Bangladesh, where a sub-district that Plan UK works with – containing 12 villages and about 360,000 people – has committed to ensuring no child marriage takes place. Just read the stories below of three girls who were forced into child marriage – it sounds unbelievable but it happens in huge numbers and it is utterly unfair and unjust. 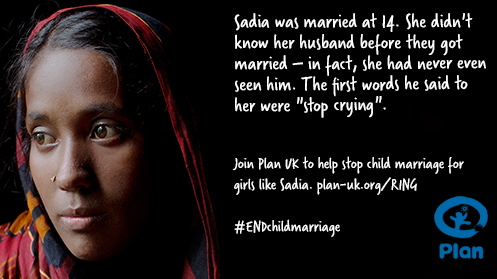 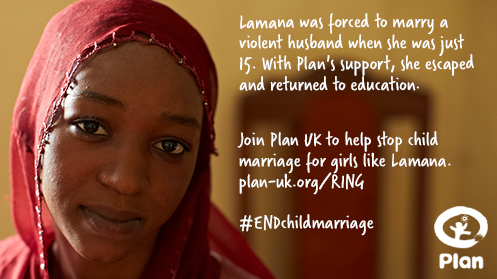 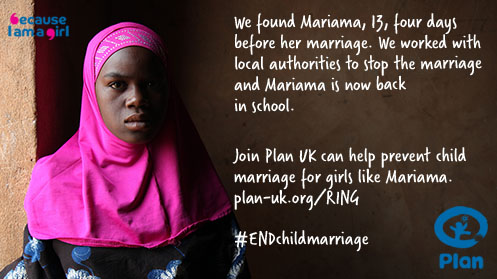 One in three girls in the developing world will be married by their eighteenth birthday. Child marriage robs children of their childhood and often their chance of an education. It increases the risk of experiencing domestic violence and abuse. And child birth is the leading cause of death for girls aged 15-19 in the developing world, claiming the lives of around 70,000 girls every single year.

Please help support the #EndChildMarriage campaign by donating £5 and raising awareness by wearing the ring. Simply text RING to 84025 or visit plan-uk.org/RING. Thank you!

I’ve recently become a Digital Ambassador for Plan UK myself, which means I’ll be helping to publicise the issues that Plan UK works to combat and promoting the projects they’re engaged in, so you can expect to hear a bit more about children’s rights (girls in particular) from me in future. I’m thrilled to be involved with such a worthy international charity. Not only does Plan UK chime well with my strong beliefs on women’s rights (to read about my feelings on gender equality, read this blog post), but it also focuses on issues in the developing parts of the world that really, truly need it.

Being a keen traveller and having seen some of these countries with my own eyes, I couldn’t turn a blind eye to them and restrict my attention and efforts to the UK alone. I’ll be getting more and more involved with Plan UK over the coming year so keep an eye out for news related to the charity! 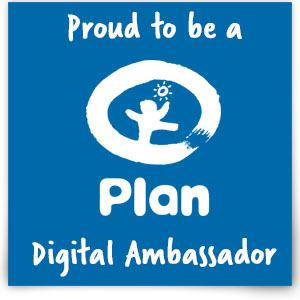