Running the Athens Marathon for Plan UK in 2 weeks’ time: Update after Month 5 of Training

Today marks 5 months since I began training for this marathon, and it’s also exactly 2 weeks until I actually run the marathon. Oh my god. That’s very soon! This is my last training update and the next time you hear about this marathon, it’ll be to find out whether or not I survived it!

The good news is that, since my last update, my injured tendon has miraculously decided to behave itself and is now causing me no problems whatsoever – phew! The fact that I missed over 4 weeks of training has definitely had an impact on my fitness for the marathon though, so I’m certainly not going to be running it in under 4 hours anymore! But I do feel confident that I’ll manage to cross the finish line, which is a relief after numerous injury-related crises of confidence that I suffered in September. There’s a heavy feeling of responsibility once you’ve been sponsored to complete something, and the guilt of not managing it, with so many people believing in me enough to donate, was a horrifying prospect. I even had a nightmare one night about not completing it and I promptly shot out of bed that morning and ran 30km! It’s funny what motivates us… But yes I can definitely say that the path to the marathon has been testing not only physically but mentally too.

Talking of sponsorship, October has been a phenomenally successful month as I’m now at 98% of my fundraising target of £1,000! Just 30 days ago I was at 34%, so I’m ecstatic to have raised so much for the children’s charity Plan UK. Learning how to fundraise has been an interesting experience and I think it’s useful to mention the reasons behind this sudden jump, to help other fundraisers also reach their targets.

Which leads me to my next little announcement! I’ve decided to thank all of my sponsors in a very personal way, something I think they’ll appreciate and which I also love receiving. So in addition to the £15 gift voucher, I will be sending every single one of my sponsors a handwritten postcard from Athens to say thank you! It’s become so rare to receive a handwritten postcard through the letterbox these days, that hopefully it’ll bring a smile to my sponsors and show my appreciation for all their support. If you’ve already sponsored me, or are about to, please do also send me your postal address to contact@thewell-travelledpostcard.com.

So how is the training itself going? I’ve changed tack completely, ignoring the Nike+ app that I followed so rigorously for the first 3 months, now focussing on one long run a week (although I missed one while on holiday in Morocco…), several intense fitness classes and a thorough stretching regime instead. So in the last month I have actually only run a mere 65.6km: 18.3km east to Battersea Park, 30km west all the way to Kew, and finally yesterday’s 18.3km intensely hilly run around Bellagio in the centre of the beautiful Lake Como in Italy, from where I’m currently writing this post! The 597m elevation gain (!) was exactly what I needed, as a third of the Athens Marathon is uphill. 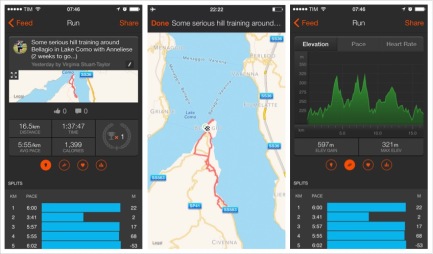 Since last month’s update I’ve fortunately been taken under the wing of Siobhan Henderson, founder of Switch Fitness, a fitness studio on Garratt Lane in Wandsworth, luckily only a 10-minute jog from my house. Siobhan has very kindly analysed my nutrition (I need to be stocking up on protein and only carb-loading in the few days beforehand) and training plan (strengthening muscles in all of my body, not just my legs) and she’s given me a really comprehensive stretching routine to prepare my muscles. Her classes comprise of weights, bands and other gym equipment and they’re intense! No lightweight Zumba and Pilates at Switch Fitness I can assure you – the classes break a sweat and I can feel the difference in my muscles afterwards. I’ve found myself doing circuits at 6am after a late night and at times have wondered why on earth I’m attempting a marathon when it involves circuits at 6am, but ultimately I am infinitely fitter than I was pre-injury, when I was running 45km a week on a training plan that ultimately caused my injury.

The idea behind these classes is to give my legs and my posterior tibialis tendon a rest from the impact of road-running, while strengthening all the interlinking muscles required to carry my body through 26.2 miles of running. And it’s worked! I jumped from a 5km run with injury, to an 18.3km run 9 days later, to a 30km run a fortnight later. I can honestly recommend Siobhan’s studio to anyone in the south-west of London and she even offers the first class completely free so you can try it out first.

I’m beginning to feel nervous and apprehensive about the marathon. I believe that I can complete it but I’m anticipating it will feel like hell on the day. I’m particularly dreading hitting “the wall” that most runners reach at the 32km mark. I’m yet to run 32km (30km is the furthest I’ve run in my entire life) so I can’t say I’ve experienced the wall yet… Wish me luck! And if it all goes a bit quiet over here on the blog, then you’ll know why!

On the 6th October I visited Plan UK’s offices for the first time and met some of the lovely people behind the charity, as well as some of the other Digital Ambassadors who help to spread the word about the charity’s work. The evening was organised to give us a glimpse at Plan UK’s latest campaign 2 days ahead of its official launch, just before the UN’s International Day of the Girl on the 11th October. I mentioned this campaign in my last update, and it’s called #LearnWithoutFear, aiming to stamp out gender-based violence in schools. That evening I met some of the people behind the campaign, including the girl who travelled to Kenya & Cambodia to interview the girls whose devastating real-life stories are told through this campaign video below, called ‘The Lesson’. The trailer-style video below aims to portray how this form of violence against girls is prevalent worldwide, even in developed countries like the UK, and it’s hard-hitting. I dare you to watch the video and not feel desperately sad and shocked, and motivated to take action. Please do share on social media and help to raise awareness of this important campaign. This school year alone 246 million children will be affected by violence in and around schools across the globe – please donate to help stop this from occurring!

Every day girls around the world suffer harassment and sexual abuse from male teachers and other students, verbal discrimination at school and fear of going to the toilet or the journey to/from school – in what should be a safe environment for them to gain an education and their passport out of poverty. There are currently 62 million girls out of education, a figure that astounds me and which desperately needs to be reduced. I strongly believe that education is the best route out of poverty, and I even declared so last month on the day the UN’s Sustainable Development Goals were announced, when the whole world was encouraged to choose the goal that they believed most important, and to share an image of that goal. I chose no.4 = a quality education. Which of these 17 do you support the most?

This month in Europe there’s been a big focus on the situation of Syrian refugees and their plight to find new homes outside of their war-torn homeland. Plan UK don’t work in Europe, however they’ve been working hard to help support Syrian refugee children in Egypt, where a total of 300,000 Syrians have fled to since the civil war began in 2011. In the middle of chaos, it is often education that can offer stability and hope to displaced children. But with most public schools in Egypt running out of space and necessary amenities, Plan UK want to upscale their response. Over the next two years they’re refurbishing and repairing 40 schools to benefit nearly 60,000 Syrian and Egyptian children and they’re seeking support from the UK to help complete this hugely important work. If you’re thinking of sponsoring my marathon and wondering what difference you can make to the Syrian refugee crisis, then consider the following:

I think the work Plan UK does is absolutely vital and I’m so proud to be supporting such a worthwhile cause through running the Athens Marathon. It would mean so much if you could donate to my JustGiving page and remember that you’ll receive a lovely £15 gift voucher for Urban Massage as a thank you! You could indulge in a massage yourself or alternatively treat someone around you who’d love a massage!

Thank you so much!! Virginia x