Postcard of the Week: Dubrovnik, Croatia 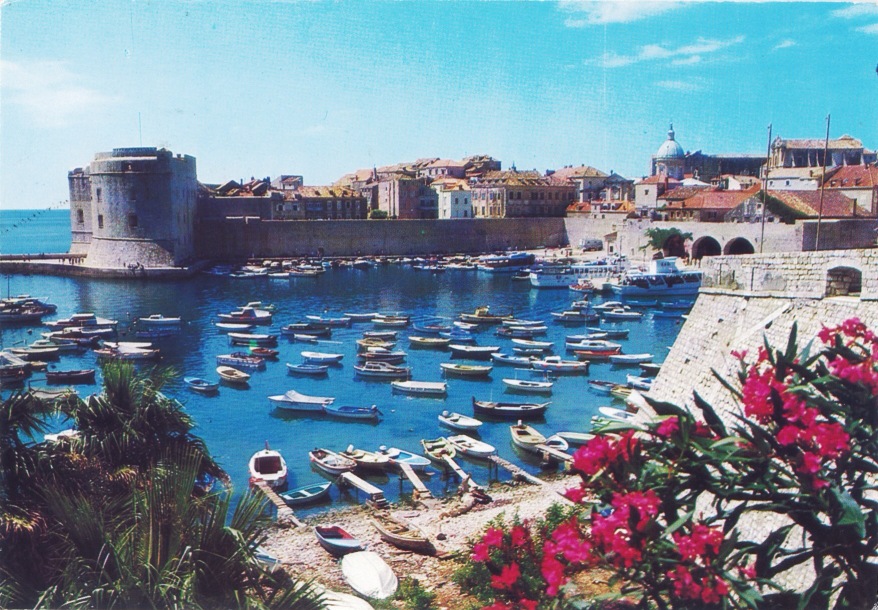 Strangely enough, Croatia hasn’t yet made a single appearance on my blog! When I visited Croatia back in 2009 on a sailing holiday with a family friend, I’m not sure I had even heard of the country before! (An embarrassing confession, but I really don’t think it was actually on most people’s radars until relatively recently). We flew into Split in the west and sailed for a week along the coast, weaving in among islands like Hvar and dropping anchor for the night in deserted, unspoilt bays belonging to the national marine protection area. We finished our trip in Dubrovnik and spent a day exploring the city.

Tourist-packed Dubrovnik was a bit of a shock after a week of nothing but tranquil waters, quiet seaside towns and ports graced with the sound of burgees tinkling in the breeze.

I got the impression that Dubrovnik is a common pit-stop on the cruise circuit (and I have a passionate dislike of large cruise liners!) so that might explain why there were quite so many day trippers. And it’s an incredibly scenic city so I can see why it draws in the crowds! Dubrovnik is a UNESCO World Heritage medieval walled city on the Dalmatian coast, abounding in 12th-17th century Gothic and Romanesque architecture, sprinkled with churches, monasteries, palaces and fountains. I remember seeing people setting off on boat tours from the harbour and there were lots and lots of shops selling local artwork, however the prices were absolutely extortionate compared to the little I’d seen elsewhere on Croatia’s mainland.

Croatia has recently landed on everyone’s hitlist due to Yacht Week and the parties and superyachts that have discovered Hvar. To be honest I didn’t see any of that on my trip back in 2009 when it was probably just getting going. By all reports Yacht Week sounds incredible though!

Funnily enough, despite never having heard of Dubrovnik until I stepped foot in it, this postcard is actually from the late 1980s, before I was even born, and was sent to my grandmother from some friends of hers, hence why it’s looking a bit retro. But the view is the same!

Have you spent more than a day in Dubrovnik? Six years after my trip there, my memory is hazy, so if you know lots about the city then do pipe up!