“The World is Your Oyster” – But Not For Everyone…

Two years ago, while living in Madrid, I wrote a blog post about my passport and why I value it more than anything else I own. Ever since then it’s been one of my most popular posts and it seems that nationality and citizenship are hot topics. Well not so much in my home country. We Brits tend to take our nationality and its associated perks for granted. My original blog post on the topic was inspired by meeting a group of American girls who also lived in Madrid with me. These girls were also travel bloggers and graduates just like me, but the main difference between us was our freedom to work. They were allowed to remain in Spain only so long as they worked in an official government-organised English language assistant programme and they weren’t allowed to do any other work, even though most of them wished to pursue careers completely unrelated to teaching. I however, as a citizen of the European Union, could work in whatever field I liked, stay as long as I like and move around Europe as much as I pleased with no visas required, and it seemed very unfair to me. That blog post was based on my realisation that nationality plays a huge role in the opportunities available to us, no matter how much “the world is our oyster” or how globalised we perceive the world to be.

Having spent over a month in Nepal, I now realise how ignorant that original blog post was. The 6 reasons I gave are still valid, but they were based on observations made in a developed country (Spain), on the pros and cons of two Western passports (American and British). I simply didn’t have a global perspective. Here in the third poorest country in Asia, it’s another story entirely and my eyes have been opened far wider. I’ve been living with and surrounded by Nepalis ever since I arrived here and of the 50 or more Nepalis that I’ve met, only two or three have ever travelled outside Nepal’s borders. Nepalese citizens have a freedom of movement and work agreement with India, but other than that, they have to apply for visas to travel anywhere. And applying for a visa is not simply a tick-box exercise for them, as it is for my burgundy British passport. For a tourist visa to a developed country, a Nepalese citizen needs to possess a house in Kathmandu and demonstrate a miminum bank balance of a whopping 10 million rupees (equal to £65,385), to prove to the embassy in question that they will return to Nepal after their visit. The reason for this is because so many Nepalis have fled their devastated and impoverished country. 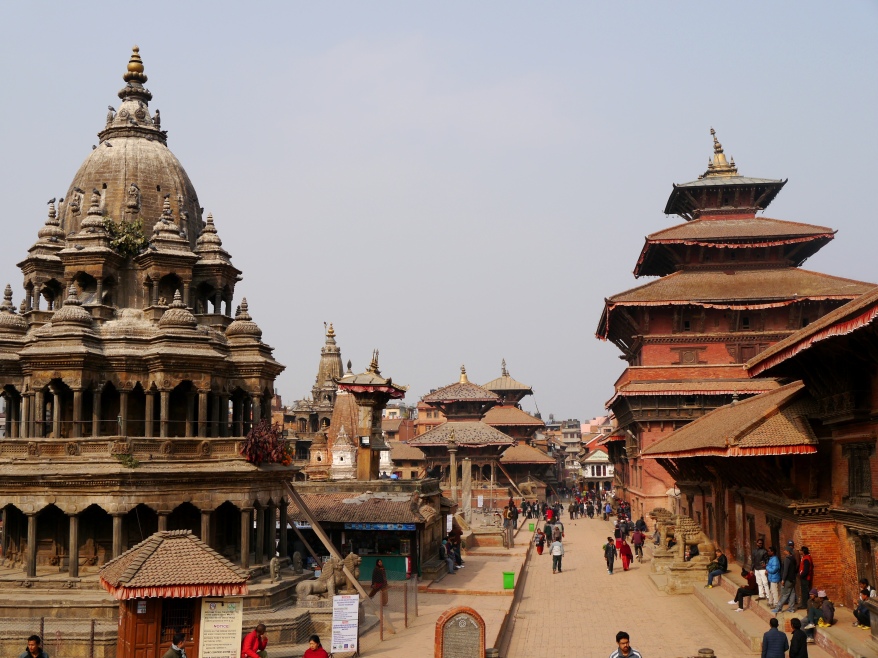 Nepal’s dependence on remittance money from the Middle East

Going through agencies in Kathmandu and paying 150,000 rupees in advance (equal to £980), Nepalis can obtain work visas for certain foreign countries, typically in the Middle East. They work there as unskilled manual labourers, typically in factories and, in one example we heard, it took the family’s son a whole year of working full-time to repay the £980 owed to the agency in Kathmandu, before he started earning anything that he could send back to his family in Nepal! In his second year in the UAE he earned a total of 180,000 rupees (equal to a mere £1,176), which makes me feel physically sick when I compare that to the salaries of the Brits I know working in the UAE…

In a separate but very common example, the two twenty-something sons in my host home have both abandoned their village (and one has even left behind his newly-wed wife) and the two brothers now live in Abu Dhabi working in a factory. I’m no expert, but I know that the UAE has a pretty poor record of treating its migrant labourers – it’s even been called modern-day slavery by some… What’s more, I know of other villages nearby ours, such as Nibuwatar, where not a single young man remains as they have all moved abroad to work, and think of the impact that has on the community left behind? But remittance money from foreign workers makes up 25% of Nepal’s economy, and the sad truth is that working in the Middle East is currently their most lucrative option, and developed countries with better human rights records, like the UK, simply won’t provide Nepalis with work visas.

A good Nepali friend of mine hasn’t seen her father for over 10 years. He managed to get a short-term visa to visit Japan and, instead of returning, he has intentionally remained there as an illegal immigrant in order to earn enough money to send his earnings back to his family here in Nepal. Here in Nepal he used to be an experienced businessman who ran his own company, but in Japan he has no choice but to work as a manual labourer, but even then he earns more than he could here in Nepal. But obviously he can’t visit his family, as he can’t leave Japan (and risk not being let back in) and they cannot visit him in Japan (neither afford the airfare nor get a visa). One day when he has earned enough and chooses to retire, he’ll return to Nepal but will no doubt receive a black mark on his passport, prohibiting him from ever receiving another visa in future.

Unable to travel for leisure

I adore my host family here in the village Bhalu Khola, and I’ve even gained a “mitini” sister and become an official member of their family through a ceremony during the 7-day Hindu puja. The family don’t want me to leave in May and have already invited me back to the two daughters’ weddings. Becoming a “mitini” also means that my mitini sister Sharmila is now officially a member of my family in the UK as well, although deep down we’re all aware that the British embassy in Kathmandu will never allow her a visa to visit the UK and meet her new family, as they are a poor family in a rural part of Nepal, with no way near enough assets to qualify for a tourist visa. I’m told that one option would be for me to “sponsor” a Nepali to visit me in the UK, only allowed if I myself own a house in the UK, pay all my taxes and earn over £20,000 per year. What’s more as a sponsor of a visa, I remain responsible for the Nepali visitor for the duration of their visit, meaning that if they disappear or fail to return to Nepal then I will be financially penalised for any costs the Home Office incur in trying to extract the visitor from the country. Not too appealing a prospect to be getting involved with…

One option for educated Nepalis to travel abroad is to get a student visa. However with tuition fees for a state university degree in Kathmandu costing 10,000 rupees per year (equivalent to £63) compared to an average of £12,000 per year for an international student in the UK, how many Nepalis realistically have that option? My co-team leader Asha has studied English Literature to Master’s level and is one of the millions in Nepal who are learning English, despite the near certainty that they will never be able to practice it in a native English-speaking country.

“The world is your oyster” – but not for everyone

My time so far in Nepal has further emphasised how important my nationality is to me and how lucky I am to have been born in one country as opposed to another. Here in Bhalu Khola I’m leading a team of 13 volunteers, 6 Nepali and 7 British. One day we ran an icebreaker session to find out about each other’s backgrounds and lives back home, and all of the 7 UK volunteers mentioned global travel / gap years / backpacking / study abroad, compared to only 1 Nepali volunteer who had once been to neighbouring India. The world is most definitely not their oyster and they are painfully aware of this reality. If I get sick of living in the UK or of the cold weather, I can just move somewhere else and live there with very little hassle. The Nepalis we’ve met however can’t simply abandon their home country, the third poorest in Asia and the fourth most climate vulnerable country in the whole world. Besides moving to work in the Middle East (and I really question the quality of life of the Nepalis who have made that move…) these lovely Nepalis have to make do and stick with Nepal. I haven’t even touched on the other challenges that poor Nepalis face, and I will write about those in a separate blog post.

I would love my fellow countrymen in Britain to appreciate what they have. To stop moaning about inefficiencies in the NHS or the British weather. To see through the nonsensical arguments that Britain should leave the EU (it most definitely should not!). Please wake up Britain and start appreciating what you have. Go out and fill up that passport of yours with foreign stamps, because the world really is your oyster, and you have no idea how many millions of people in the developing world would love to be in your shoes.