Postcard of the Week: New York City (and musings on photo-editing and appreciating the here and now) 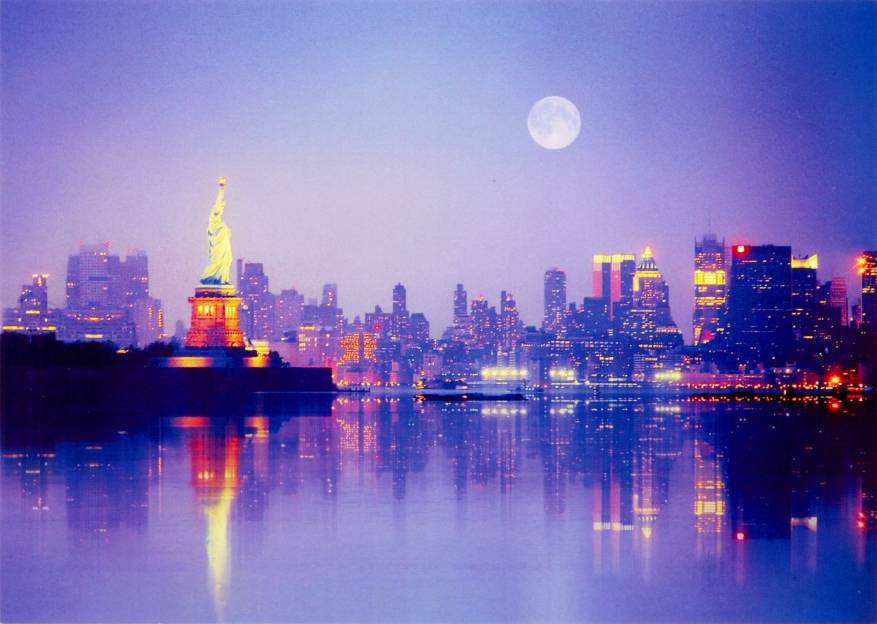 This postcard of the Statue of Liberty in New York Harbour is pretty mesmerising. As much as I wish this could be an original, untouched photo, I find it hard to believe the moon would be so big and so visible among the city lights, and I assume the photographer has dabbled a fair bit in Photoshop to bring out these colours! Although I did learn to use Photoshop in my AS-Level Art at school, I no longer know how to use it, mainly because I haven’t forked out the hundreds of pounds to buy the software. Consider this professional (but edited) postcard above in comparison to a similar photo I took myself below (it’s a different angle but you get the gist). 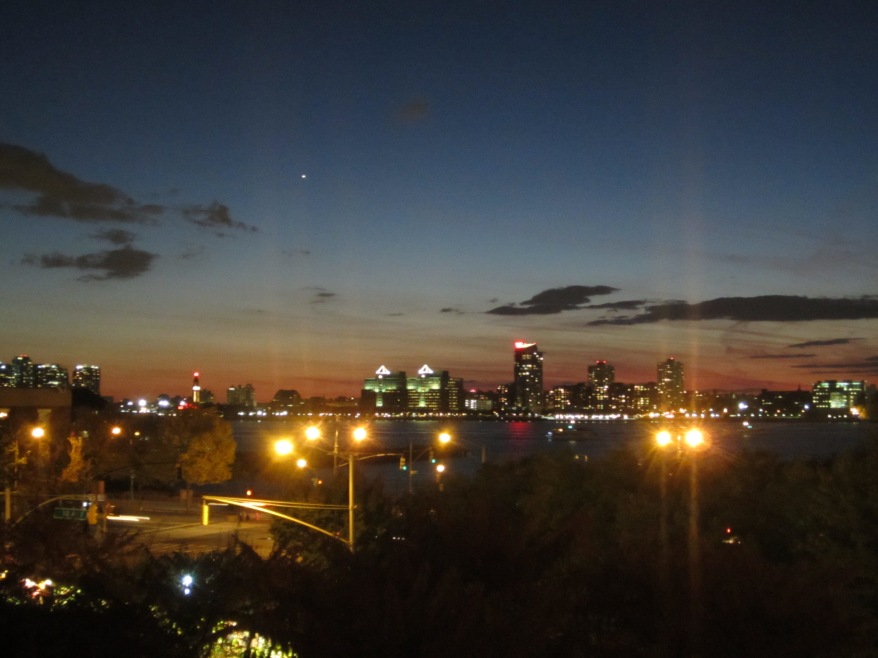 But although I recognise why photographers post-edit (this postcard is a perfect example, it’s stunning!) is it not a little unfair on New York to so radically transform it’s look? Will foreigners receiving this postcard from a friend who’s travelled to the Big Apple, later be disappointed when they take a boat across New York Harbour for themselves, and realise it doesn’t quite look like this in real life? Is the world not beautiful enough already that we can portray it as it genuinely is? I can’t help but draw parallels to the airbrushing of models and celebrities in magazines for women and teenage girls. Everyone is aware by now of the detrimental effect these false images have on girls’ self-esteem and body image, often leading to a superficial obsession with outer beauty (rather than inner) and, in the worst of cases, provoking eating disorders and mental health problems.

The doctoring of photos of women and of photos of travel destinations are clearly very different issues, the latter not having anywhere near the same importance. But what does seem apparent in this age of Instagram filters and photo editing apps is that we don’t seem to consider our surroundings beautiful enough just the way they are. If we can’t appreciate the beauty of the living world around us, and if we’re continuously tempted by untruthful but admittedly visually stunning images of the world, then how can we learn to love and be satisfied with the place we are in right now?

At the moment I live in Madrid, a truly gorgeous city, but that doesn’t stop me from lusting after the odd photo that pops up on my Facebook News Feed of a travel destination elsewhere. This topic of satisfaction and appreciation for the ‘here and now’ preys on my mind a lot. I’m fully aware that I live firmly either in the future (planning upcoming trips, daydreaming about where my life is going) or in the past (nostalgically remembering ‘the good old days’ such as living in Italy or being a student in Exeter). I don’t give anywhere near enough attention to properly enjoying and making the most of the present, which is a problem I’d like to solve.

What began as a blog post about a postcard from New York (which I picked up on my recent DTour of North America with DoubleTree by Hilton) has ended up taking a much more philosophical turn! If you’d actually like to read about the city, then head over to my blog post on my fabulous 3 days in New York City last October.

I’d like to know what you think about this – do you struggle like me to live in the present and appreciate the here and now? Does seeing incredible photos from around the world affect your satisfaction with the place you live in now, and give you wanderlust?

He’s back!!! After almost 7 months away, he is now back for good and I am over the moon! ❤️
New (and final!) blog post! Today marks the 10-Year Anniversary of The Well-Travelled Postcard!
The Royal Victoria Ball at the Palace of Versailles 🇬🇧🇫🇷 was simply the most magical night of all, and so special to share it not only with so many friends, and also with my very own father! From the palace to the champagne, the reeling to the fireworks, it was a dream from start to finish ✨
We’re now 50% through the long-distance. It has felt like an eternity but I’m grateful to finally be closer to the end than the start! Yesterday marked 103 days apart and the mid-point before he’s back for good. It’s been 3 long winter months for me, 103 back-to-back working days for him… 🙈 At least he’s back shortly for a 2-week break 🤩 and after that the spring months should be easier to bear, filled with trips and distractions.
New blog post, and my first in a while! 📝✨Looking back on 2021: my goals and travels in year two of the pandemic
Day 1 of long-distance 😢❤️
New post! 📝 Growing up with The Well-Travelled Postcards: An interior design idea for travellers
New post! The 8th painting in my series of The Well-Travelled Paintings is from the village of Kioni on the north-east coast of the small island Ithaca, in the Ionian Islands in Greece. 🇬🇷🏝 I took this photo from a yacht during a blissful day sailing around Ithaca, having set off from the larger neighbouring island of Kefalonia, where I was lucky to spend a whole month this spring. ⛵️☀️🌊
New blog post! [Link in bio] 📝🔗 I recently became a charity trustee for the first time, for the charity Raleigh International, who some might remember I volunteered with in rural Nepal for 4 months in 2016. 🇳🇵🌏 I’ve been over the moon about the role, right through the whole application process and into the trustee board meetings themselves! ✨
New blog post! ⚡️ After a writing-hiatus over a fantastically full summer, this post is about setting 'New Year' resolutions in September: How to seize that post-summer energy to help yourself and help change the world 🌍