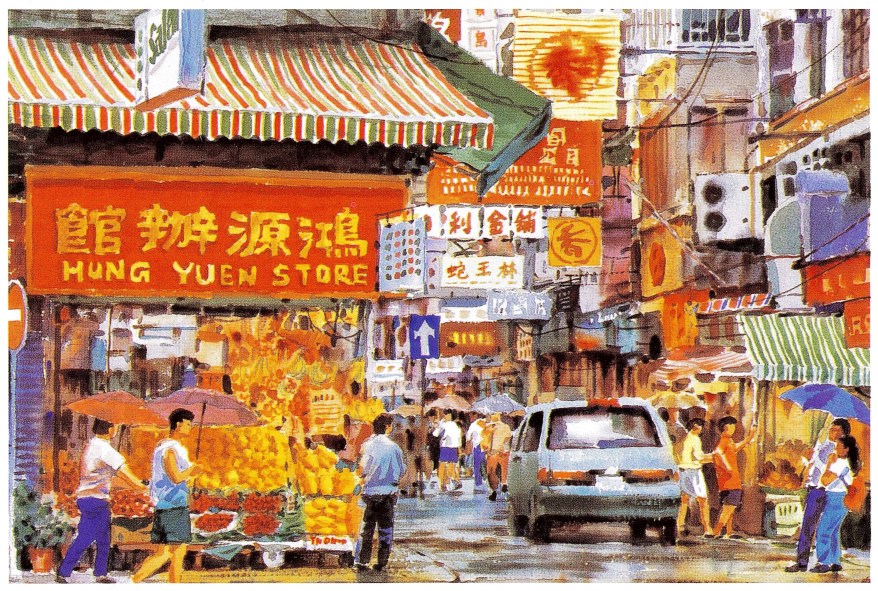 I took enough photos of Hong Kong myself that I wanted to bring back some slightly more unusual postcards: these watercolours. As I like to highlight contrasts, I chose one distinctly Western-looking watercolour of the skyscrapers on the waterfront, and one distinctly Chinese scene of a fruit shop in a busy street. The way the two very different cultures have interacted in Hong Kong is fascinating, and in some ways it seems they’ve maintained their separate identities at arm’s length from each other. The postcard above, complete with its Cantonese signs, easily gives away it’s location: we are most definitely in Asia in this scene. However in the second scene below, amid the skyscrapers, you could be forgiven for thinking this was from a large American city – Chicago and New York jump to mind for me.

But they are both very much scenes in Hong Kong. The British colonisation and governance fast-tracked this small region bordering China into the 21st century long before its superpower neighbour China. While mainland China was grappling with extreme communism under Chairman Mao and severe restrictions on citizen’s rights and freedoms, with poverty and starvation spreading like a plague, Hong Kong was firmly establishing itself as a powerful centre for manufacturing, finance, shipping and business. With Western money came Western people, Western architecture and Western culture. But the Chinese heritage can still be seen interspersed between the high-rise buildings, and particularly in Kowloon, which we explored on our second day in the city. You can read that blog post here, about the many markets we visited and about the stark contrasts between Kowloon and the main island.

As I mentioned a few weeks ago when writing about St John’s Cathedral in Hong Kong (read here),  my great-grandparents and my grandfather lived there almost 100 years ago, during British rule. As such lots of Cantonese furniture and objects have been passed through the family including a painting of Hong Kong at night, looking over Victoria Harbour from Kowloon. It’s similar in composition to the watercolour postcard above, except for one major difference – there are no skyscrapers. My family lived there before the mass construction, at a time when you could still see the silhouette of the peak without a skyscraper interrupting the view. It’s incredible to think how radically the city has evolved since that painting was brought back to Britain in the 1930s…

I find Hong Kong absolutely fascinating. Of course it has its positives as well as its negatives, like any place in the world. What do you think of Hong Kong?
0.000000 0.000000