San Sebastián, a seaside town on the north coast of Spain, is every bit as lovely as the postcard above. That isn’t just clever photography or fortunate lighting – San Sebastián actually looks like that. And I can tell you that because I was lucky enough to actually go there last weekend. It was my 25th birthday and I just didn’t feel like staying in Madrid…

And what a good idea it turned out to be! My boyfriend and I stayed in a B&B (pensión) in the Old Town and spent our days wandering through the streets and sitting in plazas munching on pintxos, strolling along the seawall and the Playa de la Concha, scaling the hills either side of the main bay, the Monte Igueldo and the Monte Urgull, to get some spectacular views and to watch the sunset over the horizon. We tucked into picnics and Cava on the beach (our grown-up version of botellón), braved the waves with the surfers on Playa de la Zurriola, watched the World Cup final while hopping between pintxo bars and for my birthday my boyfriend even treated me to a professional massage (my ultimate luxury) and a tasting menu of 6 courses and 5 different wines at Bodegón Alejandro. It was absolutely exquisite and so much fun to pair up the wines with the different dishes. I’m a slow eater as I like to talk during meals so I was almost always falling behind with my many glasses of wine! 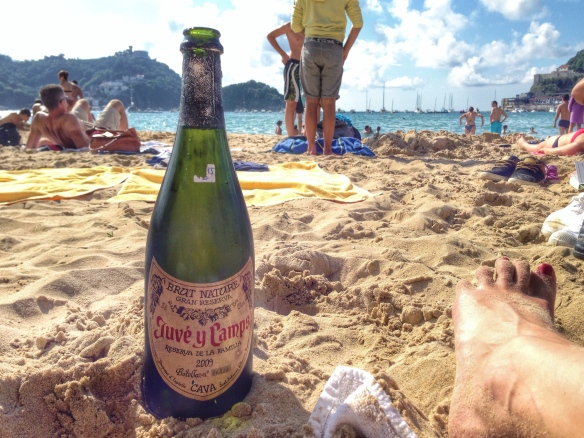 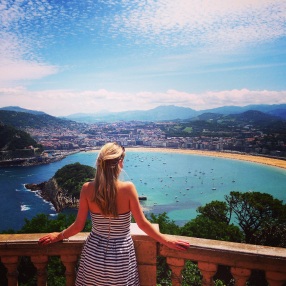 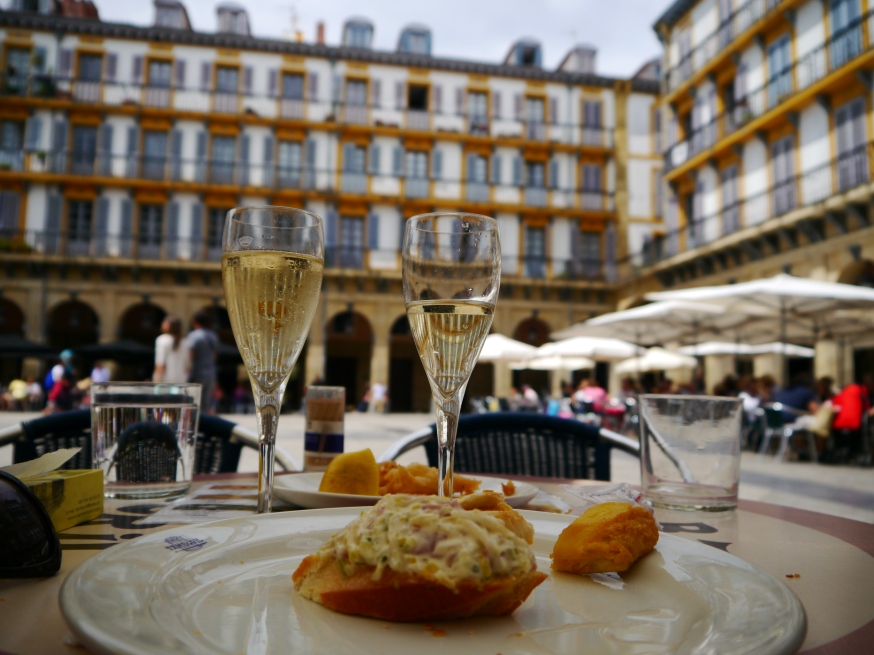 The town is small enough to go everywhere on foot and the beach is just a 3-min walk away from the Old Town. Although we’d been forecasted a weekend of solid rain, there was only a light drizzle for about 5 minutes in total and blissful sun and clear skies the rest of the time! (I think the weather forecaster wants to keep San Sebastián a secret and tries to put off tourists by announcing bad weather…) As it’s on Spain’s north coast it’s a good 5°C cooler than Madrid and has a welcome salty sea breeze in addition to its luscious green trees. In all honesty the bay looks like something you’d find along the Côte d’Azur in the south of France or the Ligurian coast in north-west Italy, rather than in the Bay of Biscay north of Spain, which is notorious for its rough seas. If you haven’t yet been to San Sebastián then now’s time for you to add it to your wishlist. Apart from one night in Bilbao last September 2013, I know virtually nothing of the Basque Country (the region in which you’ll find San Sebastián (which is known as Donostia in the Basque language)) but I’m now thinking it deserves another trip to properly explore. If you don’t believe me, just take a look at my video below…

Even before I moved to Spain, I knew that I wanted to visit San Sebastián, I even said so in this blog post: ‘8 Essential Tips for Moving Abroad‘. And with only 2 weeks left in Spain before I return to London for good, I am desperately wishing I had gone to the north coast sooner and generally just spent more time on any Spanish coast! Madrid is located bang in the middle of the country, over 300km away from the nearest coast. Apart from San Sebastián, I have been to the Spanish coast just one other time in the last 6 months, and that was to Valencia with a uni friend back in April (here’s a post about our trip to Valencia).

As I write this, it is a sweltering 38°C in Madrid and it’s too hot for comfort. Air-conditioning is no longer a nice-to-have, it’s now essential for survival! (Sorry planet, I did try to resist sleeping with the A/C on, but it became torture!) Clever madrileños head to the coast every long weekend (puente) to cool off in Spain’s gorgeous Mediterranean Sea or on the rougher but picturesque Atlantic coast. So how have I failed to spend more time on the coast? Friends and colleagues of mine have headed off to beaches near Barcelona, Murcia, Malaga, Alicante and even further afield in Mallorca, Ibiza and the Canary Islands. I know a lovely Spanish couple back in England and the wife is originally from Tenerife, one of the Canary Islands down on the west coast of Africa. How she ever managed to leave such a paradise (and to go to England of all places!) is beyond me, but she’s told me a lot about her home and the island of Tenerife where her family still live. The excellent sunny weather all-year-round, the white sandy beaches, the hidden bays, the crystal clear water… I can’t quite believe that I’ve never been. It’s not even as expensive as you’d expect paradise to be. Companies like First Choice offer holidays to lots of different places in Tenerife with flights from the UK included, so it’s definitely within reach.

I’m shocked that after spending a total of a year living in Spain (6 months in Córdoba in 2010 & now 6 months in Madrid) I still have so much more left to see. Tut tut… I shall simply have to come back!

Have you been to San Sebastián? Which is your favourite Spanish coastline?