Back in May, at the end of our trip to Bali in Indonesia, my friend Imy and I headed into the heart of the jungle to a village called Ubud (here’s my full blog post on Ubud), which is no longer an insider secret, thanks to a certain film starring Julia Roberts. Although Indonesia is a majority Muslim country, the island of Bali’s population is 92% Hindu and as such many of their cultural traditions and religious customs are different. Having never been to a Hindu region before, I was fascinated by their many temples and we were lucky enough to be in Bali during the Galungan celebrations!

Galungan is one of the biggest religious celebrations on the island and it honours the creator of the universe (Ida Sang Hyang Widi) and the spirits of the honoured ancestors. The festival apparently symbolises the victory of good (Dharma) over evil (Adharma) and takes place every 210 days, roughly every 6 months. We had no idea this was going on until we were driving up to Ubud after spending 7 nights on the coast in Nusa Dua. The roads up into Ubud are narrow, rural and lined with typical family compounds. At one point we came across a procession of villagers in traditional dress, with head scarves and black and white check-pattern cloth wrapped around their legs, carrying a large gilt, ornate sedan-like object, to the animated sound of beating drums and gongs.

Our driver explained that it was a local holiday for Galungan, and then we started to notice the lavish decoration all around, in every direction. Each family puts up a really long bamboo pole, called a penjor, decorated with flowers and coloured paper outside the entrance to their houses, as well as placing small offerings on top of the family’s altar. The penjor is a symbol of victory against evil spirits and must contain agricultural products such are used in daily life. Thus you will find rice and vegetables featuring on each penjor, while the swaying, bowing upper section denotes respect and acknowledgment of the gods. There’s a penjor every 20 metres or so, outside every compound, and we continued to see them over our next three days in Ubud. I took these photos below while zooming past on a bicycle during our bike ride down the slopes of Mount Batur. 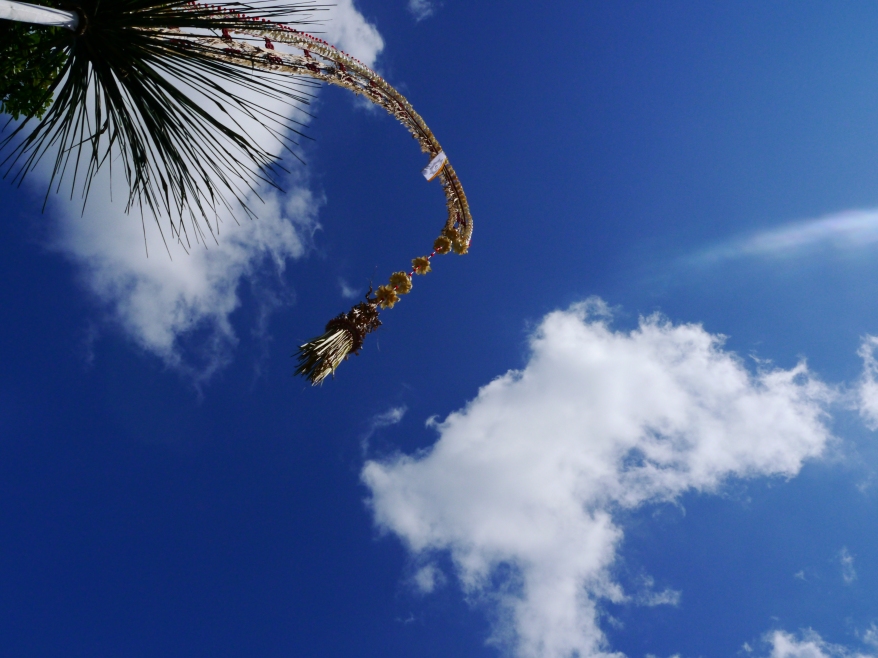 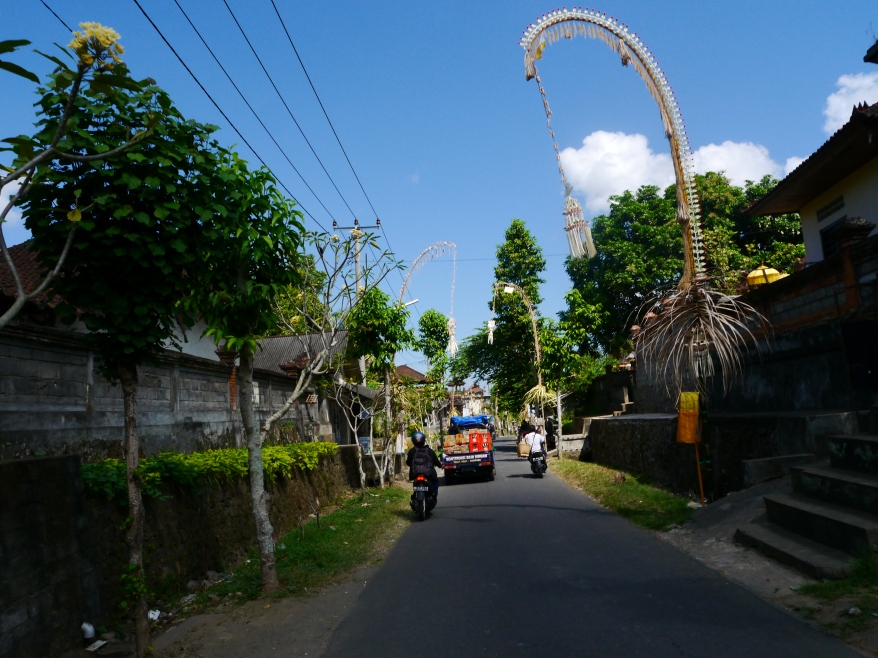 As we passed this procession we noticed that at the entrance to each house, each family was there in their traditional dress, beside their altar with their offerings, patiently waiting to be blessed by the passing procession. It was fantastic to see the celebrations with our own eyes, and even more so because it was unexpected. We had noticed the offerings in Nusa Dua as well, piled up outside temples, on the floor at the entrance to shops, and on altars too. The offerings, placed on a mini plate made of coconut palm leaves, often contain flowers, petals, fruit, sweets and even cigarettes (!) and we saw the monkeys at the Samabe Resort greedily tuck into the offerings! Apparently you will always find monkeys near the temples in Bali, as they know they’ll have plenty to snack on there!

I found Ubud and the island’s religious customs fascinating and was disappointed that I hadn’t learnt about it sooner. We were nearing the end of our 10 days in Bali when I discovered I wanted to learn more, by which point not enough time remained. In the town of Ubud (which I didn’t like, the countryside is much nicer) you’ll see places offering all sorts of classes, from Balinese costume to gamelan playing, from batik painting to cooking. One of the classes you’ll see advertised is offering-making. It’s apparently more complicated than it looks, but I can imagine it would be a lovely little skill to bring back home. I quite like the idea of leaving little offerings outside my front door, supposedly to protect against spirits and ward them off from entering…