Exploring the Caribbean Island of Antigua: Sailing vs. Dry Land?

The Caribbean is a place that features on many, many people’s wishlists. The islands possess a dreamlike status for many and are often the trip of a lifetime. But which is the best way to visit a Caribbean island, from the decks of a yacht or from dry land? Last year, in the names of research (who am I kidding…) I tried out both for 5 days each, to decide once and for all which of the two methods is best.

From the decks of a yacht

Back in May 2015 I ticked off another item from my pre-30 travel wishlist: I got my RYA Day Skipper qualification. What actually is that? It’s a qualification that allows me to charter and skipper a yacht and proves a certain level of competence to the company lending the yacht to me. A driving license of sorts for yachts. I’ve previously written about why I adore sailing so much and how I got into it, from terrifying beginnings as a child with no idea how to handle a dinghy. My mother already has the qualification and as you often require two Day Skippers to charter a yacht, it was natural that my sister Olivia and I wanted to get it too.

To get the RYA Day Skipper you have to jump through a certain number of hoops. First we took the theory course as an 8-week evening class in London with Hamilton Sailing, which culminates in a theory exam. My mother, sister and I then set about researching the 5-day practical course. You can do the course around the world wherever there’s an RYA-certified training centre, and I didn’t much fancy using 5 of my annual leave days to get bashed around in rain and storms in the Solent again (I did a rather traumatic Competent Crew course back in 2012 that still haunts me…) Thinking the idea would be swiftly batted away as extravagant, I suggested the Caribbean to my mother. Lo and behold, a few months later we find ourselves touching down on Antigua’s V.C. Bird International Airport runway with that familiar whoosh of warm air that enters the plane when the cabin doors are opened in hot climates. Well if you don’t ask, you don’t get!

I had found Miramar Sailing School, a small school owned and run by an English couple, Brian and Pippa. Antigua and Barbuda was a British colony until 1981 so it has a large number of British expats out there and it’s long been a hub for sailing, dating back to Lord Nelson, the days of the sugar trade and no doubt a fair few pirates as well.  We were exceptionally lucky to have a whole yacht for just us three girls and our instructor, the lovely Pippa, a real coup to have an all-girl yacht for the 5 days of the course. (In my experience, men get smelly pretty quickly on a yacht…) 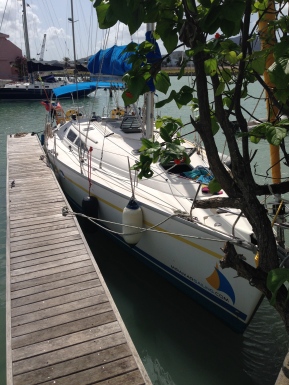 For some reason that particular week in May was particularly quiet for sailing so we had the waters completely to ourselves. Very little to collide with – perfect! We provisioned the yacht (read: did a big food shop) and departed from Jolly Harbour, and over the 5-day course we managed to see a good deal of Antigua from the water, heading to Sandy Island and Long Island (imaginative colonials weren’t they…), Jumbly Bay (apparently a popular retreat for wealthy celebrities), Great Bird Island, Deep Bay (where you can swim ashore and climb the hill to a ruined fort and sweeping 360° views), St John’s Harbour (during the obligatory night sail), Carlisle Bay and Five Islands Bay.

During our 5-day sail around the island’s coastline, we saw a fair few enormous catamarans crammed full of day trippers looking to see some of the coast. Compared to our beloved Danae (that was Pippa’s yacht’s name) they looked stressful, with music blaring out and holidaymakers struggling to stay in the shade away from the Caribbean sun. We however had an altogether more relaxed arrangement, sleeping at anchor in these various bays, diving into the water for a refreshing swim before cooking up that night’s supper and dining in a totally still and secluded bay, under a clear sky full of twinkling stars, gently rocking in the water. Utter bliss. Writing this makes me want to jump straight back onto a yacht this instant! There’s a wonderful feeling of space and distance when you’re surrounded by water, independent from the world onshore, with all the food and supplies you need.

The course wasn’t a pure holiday though of course. It involved plotting courses to steer and planning the day’s route, taking into account wind speed and direction, consulting depth charts and calculating compass bearings. We each spent a day as “skipper” and I revelled in legitimately being able to boss around my mother and sister for once! We practised lots of manoeuvres and Man-Over-Board techniques, as well as docking, which I personally found the most nerve-wrecking part of the entire week. Both Olivia and my mother managed to break part of yacht when approaching the jetty, but by some miracle I sailed in (literally) in a single perfect move. As the very last bit of sailing we did that holiday, I took it as a good omen and Olivia and I did both pass the course! 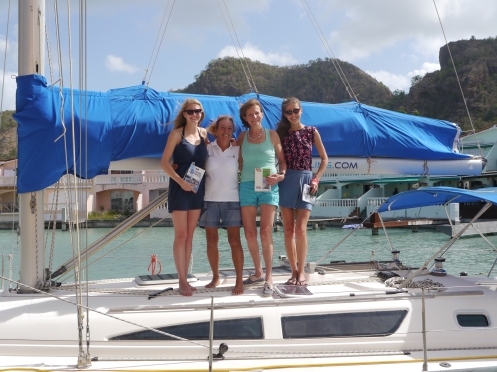 One aspect of Antigua to take into account is that there’s so little tidal range that it’s classified as “non-tidal”, just like the Mediterranean. Good for us while learning (tides are just another hassle, albeit an important hassle, to include in the calculations), but not so handy for sailing in tidal parts of the world, such as the UK. So a month later Olivia and I did a 2-day tidal conversion course in the Solent to prove that we can also deal with tides, all of which we were taught in the theory part of the course.

I’m growing really fond of using my holidays to learn something, as it provides a great focus for a trip and actively concentrating my brain on learning (rather than simply lying on a beach) helps me switch off from the day-to-day back at home. For example I spent a week in Malta in 2014 learning to scuba dive, a week in Antigua in 2015 learning to sail, and I’m now considering a week’s surfing course too after my first attempts in Sri Lanka. And even if you didn’t want to learn to sail, I’d recommend a sailing holiday with a professional skipper as an interesting break from the standard beach resort holiday. Not only do you see more of the island by boat, but there’s the added challenge and fun of cooking on board, jumping off the boat whenever takes your fancy and of course, no sand in sight! I love a sandy beach, don’t get me wrong, but sand seems to stick to me like glitter – I can never get it all off!

What to see on dry land

Of course we did see some of the island of Antigua from dry land too. We spent five nights in a cute self-catered waterfront villa in Jolly Harbour, dining in the marina’s various restaurants such as Mellini’s and West Point, watching the local Antiguan band play at Al Porto restaurant and of course enjoying a couple of beach days in the incredible Tranquility Bay and on Darkwood Beach (a short taxi ride, and in my opinion not as pretty as Tranquility Bay). Even 8 months later, a photo I took of Tranquility Bay still adorns my iPhone background… One restaurant recommended to me by my friend Ellie that we sadly missed was Sheer Rocks and we also ate at Dennis’ Restaurant overlooking Coco Beach on our very last night, which has a great buzzing atmosphere at sunset with a welcome sea breeze.

You must also make the trip up to Shirley Heights on a Sunday night for their weekly party. It’s fairly touristy but it can’t be beaten for atmosphere – an open-air Jerk Barbeque, Dark and Stormy cocktails, Strawberry Daquiris, steel drummers, a reggae band, dancing and breathtaking views at sunset. Such fun! 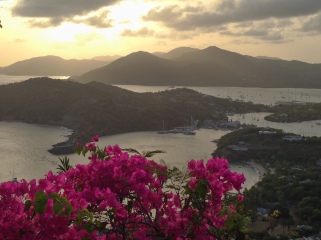 Nearby Shirley Heights is a town called English Harbour, where you should explore Nelson’s Dockyard, which has been beautifully preserved to show how the British Navy used Antigua as a naval base. Today the Dockyard is named after the victor of the battle of Trafalgar, Admiral Lord Nelson. Nelson was based at English Harbour from 1784 to 1787 and he was a Senior Captain at 27-years-old, becoming the temporary Commander-in-Chief of the Leeward Islands for a short time.

Antigua’s most picturesque drive meanders from the low central plain of the island up into the ancient volcanic hills of the Parish of Saint Mary in the island’s south-west quarter. The road passes through an area of lush vegetation and rainforest and rises to the steep farmlands around Fig Tree Hill (figs are what Antiguans call bananas) before descending to the coastline again. Along the way are banana, mango, and coconut groves, as well as a number of old sugar mills and pleasant little churches. 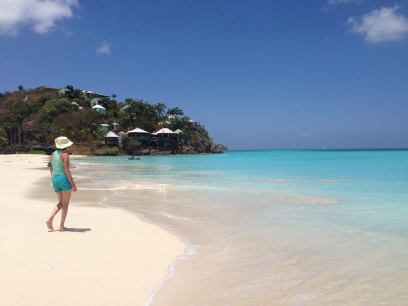 It was great to see Antigua from the sea and from dry land, but my preference would have to be from the sea! For the inaccessible bays that we sailed to and slept in, bays we shared with not another soul, were completely priceless. Something I think would be almost impossible on the overpopulated Mediterranean coast. Antigua’s economy is heavily reliant on tourism but they’ve managed to strike the balance perfectly – the island and its beaches aren’t crowded with cheap package holiday tourists, instead the island feels spacious and luxurious. Of course that’s reflected in the price of travelling around Antigua – it’s not a cheap destination. But far better I think to preserve their beautiful island with only a limited number of tourists, than to encourage the mass tourism that some developing countries leap to when trying to inject money into their gradually growing economies. Antigua is just perfect.

Have you been to Antigua and is there anything you’d add? And would you prefer to see Antigua from the sea or from dry land?