It’s been two months since I was skiing in the Swiss resort of Mürren and every time I see a friend or relative head off on a skiing holiday since then, I get these terrible pangs of longing for another week in the Alps! I had an absolutely brilliant week in Mürren and I really enjoyed racing in the Inferno (you can find a full race report here) but I’m yet to write about the actual ski resort itself, which is of course open the whole of the winter season for normal downhill skiing without the racing element. Mürren is honestly the most beautiful Alpine village I have ever been to and if you haven’t been there yet, then you should get Mürren onto your radar for your next skiing holiday.

How to get to Mürren?

Tip: if you have your own skis & boots then make sure you fly with Swiss Air, as there are no extra charges for ski equipment!

After flying into a snowy Zurich airport, I travelled with my aunt by train to Mürren. It’s nearly a 4-hour journey with changes in Zurich, Bern, Interlaken, Lauterbrunnen and Grütschalp but it’s one of the most beautiful train journeys I’ve ever taken, so make sure you’re travelling in daylight and have good window seats facing forwards. You pass through picturesque countryside and stunning cities like Bern, skirting along the shore of Thunersee Lake for a good half an hour, before heading up into the Jungfrau valley. Finally you board a little cable car and then a cute little train (that looks straight out of The Grand Budapest Hotel) to skirt the cliff towards Mürren. Be careful not to catch too late a flight, as the village is only accessible by this cable car – there’s no road access for taxis after the last cable car!

A much quicker alternative is to rent a car (taking around 2 hours’ driving from Zurich), which you can leave in a car park at Lauterbrunnen before you get into the cable car, but I think the train adds to the experience. 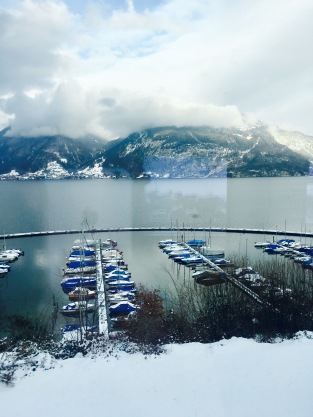 Where to stay in Mürren?

The village is thankfully absent of concrete eye-sores or the purpose built flats you find in some French ski resorts. There are merely traditional wooden chalets and Alpine hotels that blend well into the ‘chocolate box’ scenery, as Mürren is famous for. It’s also quite a small village, meaning nothing is ever too far away, but also that there’s limited accommodation. I was very lucky to stay with a lovely Swiss-Scottish family, but others I know stayed in hotels, self-catered apartments or even a random room above a ski-shop. 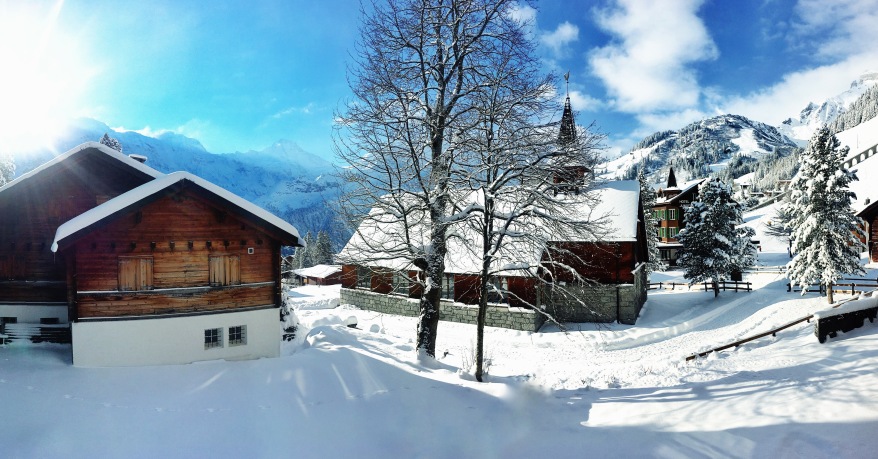 The 4* Hotel Eiger is at the fancier end of the scale, with a few 3* and 2* hotels as well (the Jungfrau, Alpenruh, Bellevue, etc.), and you can find a whole host of chalets and apartments through the tourist office website. During busy weeks it seems like some people also stay in the lower village of Gimmelwald, which connects to Mürren by cable car. 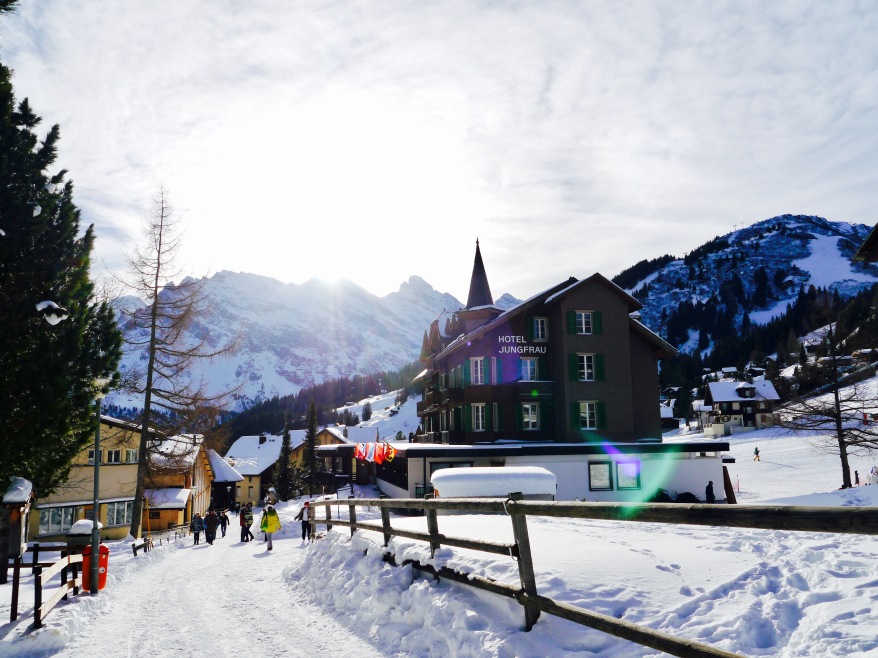 The skiing in Mürren

I had 5 whole days of skiing on the Schilthorn mountain prior to the Inferno race, with some good powder at the beginning of the week and some beautifully sunny days the rest of the week.

The Mürren-Schilthorn ski area has 51km of ski runs with 14 lifts, and you can also buy an extended ski pass to access the whole Jungfrau ski area (including Wengen and Grindelwald) which covers 213km of ski runs. The Mürren-Schilthorn ski area is in the Bernese Alps at an altitude between 1650-3000m above sea level, providing plenty of snow and beautiful views over the impressive Eiger, Mönch and Jungfrau mountains.

I never got over seeing the sheer north face of the Eiger covered in shadow every single day – it truly is a breathtaking view. My aunt even confessed that it’s her favourite view in the whole of the Alps, and she has literally skied everywhere in the Alps, so that is saying something! One advantage of it being such a small village is that the slopes are never crowded and you don’t queue endlessly for lifts (with the exception of the Inferno race day, which only happens once a year!). 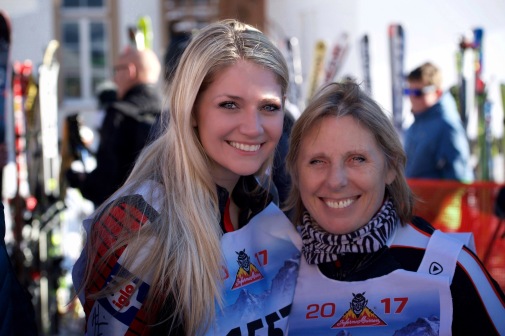 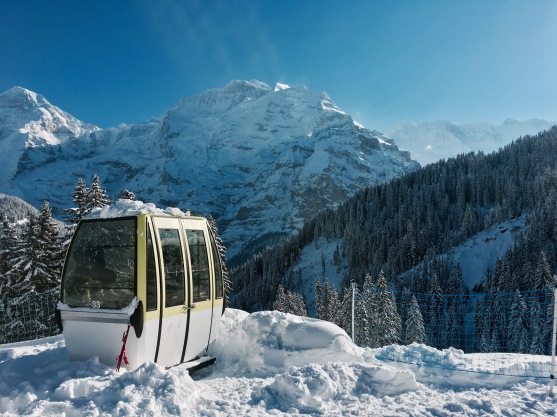 The resort is quite small so you’ll find your way around the slopes pretty quickly and it’s easy to dip off-piste. I didn’t see a single ski school while I was there, which suggests that it’s not a resort for beginners, and in fact the standard of every single skier I saw was really high. I’m personally more used to skiing in much larger valleys with endless runs and endless off-piste, so if I hadn’t been staying on-piste to prepare for the race, then I potentially would have got a little frustrated with the same old runs… But I do know of some others who travelled over to Wengen by cable car and bus one day for a change of scenery.

What else is there to do apart from ski?

You might know of Mürren from the James Bond film On Her Majesty’s Secret Service, in which the baddie lives in his evil, revolving lair atop the Schilthorn Mountain, and Bond manages to escape in a brilliant night-time ski scene… The evil lair does really exist, and they’ve turned it into a whole James Bond experience that you can visit. The 2970m-altitude building houses the Piz Gloria revolving restaurant with 360° views over more than 200 mountain peaks. I had a brilliant sunrise breakfast there and I hear the unlimited Prosecco brunch buffet was also great! Included in your ski pass is also entry to the Bond World which is apparently very entertaining as well. 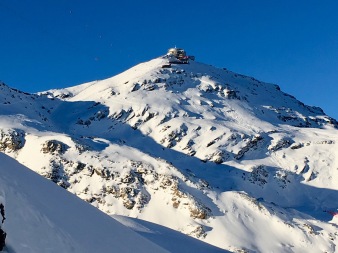 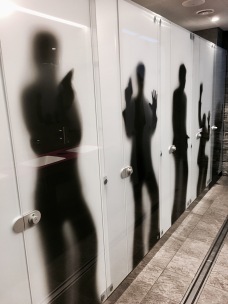 Lower down at the 2677m-altitude Birg lift station is a bistro and the must-do Skyline and Thrill Walk. The Skyline is a panoramic viewing platform and the Thrill Walk is a path along the sheer cliff edge of the mountain, with huge vertical drops just below. Both of these are really worth doing if you’re not afraid of heights… although I would perhaps have expected slightly higher railings to stop you toppling over the edge! 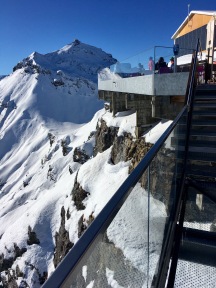 Down in the village itself there’s also quite a lot to keep you occupied: hiking trails, sledging, an ice rink (which even had a curling competition) and a sports centre with spa, swimming pool, gym, massages, treatments and an outdoor hot tub to which you can order glasses of Prosecco! And I would have loved to go paragliding over the beautiful, sunny Lauterbrunnen valley. I’ll have to save that for next time…

Where to eat in Mürren?

On our first night we had a tobogganing tournament (I very embarrassingly managed to wipe out straight into a snow drift – taking the judge with me!) en route to the Suppenalp mountainside restaurant for an obligatory, delicious Swiss cheese fondue, which was followed by a terrifying toboggan back down to the village in the pitch black! (Tip: take a head torch!) Other than that, we ate at Hotel Alpina and Hotel Alpenblick, and the Hotel Bellevue has a beautiful terrace for a sunny lunch in the village. The bar/club to head to after dinner is Tächi, inside the Hotel Eiger, although my memories of our nights there are somewhat hazy! 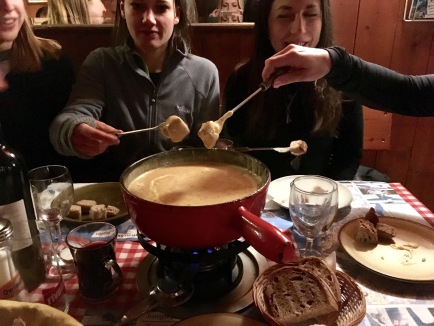 Up on the mountain you have the Piz Gloria restaurant and the Birg bistro, as well as a good few other mountainside restaurants for a hearty Swiss lunch, and the restaurant in Winteregg has a great big sun terrace to catch some rays. 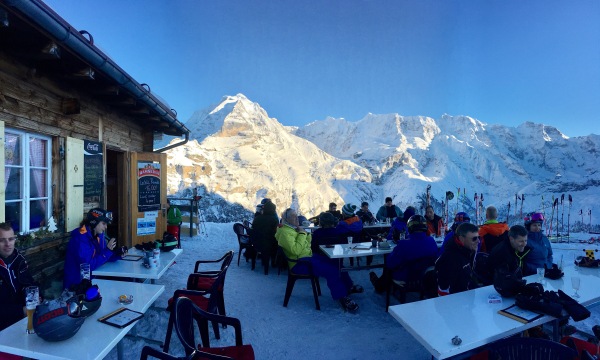 The one downside of Mürren…

I tried to avoid mentioning this until last, as I didn’t want to ruin the lovely impression of Mürren that I have in my memory, but I do have to mention the one major downfall of skiing in Switzerland: it is phenomenally expensive. The trains, the ski pass, the ski hire (if you need it), the dinners, the drinks, the supermarkets, the mountain restaurants, the fondues, the bars: the cost was eye-watering, and not merely because I’m a student at the moment. Even if I were fully topped up with my London salary, it would still have been very expensive. Just to warn you! Don’t let that put you off entirely, as Mürren is an absolutely magical ski resort and in my mind it is totally unique among all the Alpine resorts I’ve skied in. But just beware of the cost of skiing in Switzerland…

Overall I had a fantastic week in Mürren and I’m counting down the weeks to go back next year! I am extremely grateful to the lovely family that hosted me for the week, to my aunt for kitting me out with race skis and organising the transport and various other bits and pieces, and to the really helpful people at the tourist office who also looked after me very well! It’s such a unique Alpine village in such breath-taking surroundings, unlike anywhere else I’ve ever skied.

Have you heard of Mürren before or already been there? Do these photos tempt you to ski in Switzerland, or do you have any skiing trips booked for the rest of this winter season?