The prize: a coast-to-coast trip across North America! 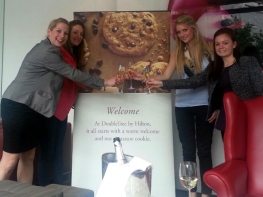 I’ve received some fantastic news – I’ve been chosen as one of six DTourists to travel the world with DoubleTree by Hilton! A month or so ago I entered an amazing competition on Youtube that I never dreamed I would actually win. And then two weeks ago I was told that I’m one of six extremely lucky people who’ll each travel to a different continent for between 2 weeks – 2 months, but they couldn’t tell me where. I’ve been dying to know ever since and yesterday I took part in a Google Hangout to find out which continent I’m going to. And I’m so excited because I found out that I’ll be travelling coast-to-coast across North America, staying in DoubleTree by Hilton hotels along the way! I’m really excited as I haven’t been to the US in over 7 years, and I really don’t know that part of the world very well, having only been to the east coast before. So this is a fantastic chance to explore the rest of the country and especially the west coast (and California!) and I’ll be able to tap into the expert knowledge of DoubleTree by Hilton to explore and discover this amazing country. They haven’t yet told me the exact itinerary and the exact cities I’ll be visiting, but I’ll be sure to let you know as soon as I do!

The ‘DTour of a Lifetime’ Competition

To enter  the competition I had to upload a video of a place I’ve visited to the DTour website on Youtube. Hundreds of people have pinned videos and photos to an interactive map of the world, helping you to see what a place is really like. If you’re stuck for where to go next, take a browse of the map and see where takes your fancy! I uploaded a video of Modena, in Italy, and to my surprise I was shortlisted for the prize.

Next I had to make a 1-min video explaining why I’d like to win the DTour of a Lifetime, which my friend Jess kindly helped to film next to the Thames, near my house in London, and I had to answer various questions about my travel personality and about previous trips I’ve taken. It was fun to think through everywhere I’ve been and write my answers and later this week I’ll post my answers and a link to the video to let you see them. This video and my questionnaire answers seem to have done the trick as they selected me out of all the hundreds of candidates to be a DTourist! I was then invited to the DoubleTree hotel in Westminster, London, for a “final interview” a fortnight ago which I was a bit nervous about. However I arrived and was very relieved to hear that it was simply a guise to get me to the hotel where they then told me I had won and popped open the champagne! However they didn’t tell me where I’d been going, so I’ve spent 2 weeks anxiously waiting to find out. This afternoon we had a Google Hangout (below) where they revealed to the press who each of us are and where we’re each headed! The whole hangout is 35 minutes long and also features travel tips from the extremely well-travelled Julia Dimon, and the parts where I’m featured are at 9 mins, 22 mins, 29 mins and 32 mins.

I can’t wait to see what the other 5 DTourists will get up to in each continent, and here they are:

I’m so so excited! Luckily there are still other trips and prizes up for grabs every 2 months so head over to the DoubleTree website to find out more!